Has BP really cleaned up the Gulf oil spill? 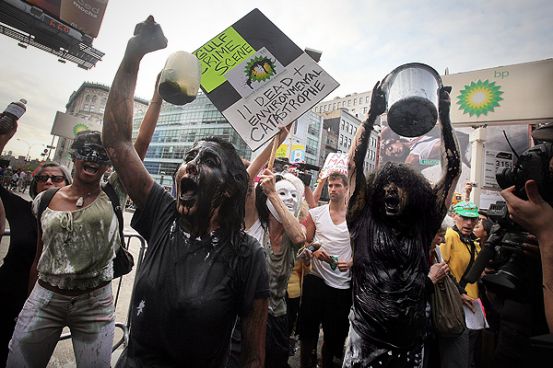 There are few people who can claim direct knowledge of the ocean floor, at least before the invention of the spill-cam, last year's strangely compulsive live feed of the oil billowing out of BP's blown-out well in the Gulf of Mexico. But for Samantha Joye it was familiar terrain. The intersection of oil, gas and marine life in the Mississippi Canyon has preoccupied the University of Georgia scientist for years. So one year after an explosion on the Deepwater Horizon offshore drilling rig, about 40 miles off the coast of Louisiana, killed 11 men and disgorged more than 4m barrels of crude, Joye could be forgiven for denying the official version of the BP oil disaster that life is returning to normal in the Gulf.

The view from her submarine is different, and her attachment is almost personal. On her descent to a location 10 miles from BP's well in December, Joye landed on an ocean floor coated with dark brown muck about 4cm deep. Thick ropes of slime draped across coral like cobwebs in a haunted house. The few creatures that remained alive, such as the crabs, were too listless to flee. "Most of the time when you go at them with a submarine, they just run," she says. "They weren't running, they were just sitting there, dazed and stupefied. They certainly weren't behaving as normal." Her conclusion? "I think it is not beyond the imagination that 50% of the oil is still floating around out there."

At a time when the White House, Congress, government officials and oil companies are trying to put the oil disaster behind them, that is not the message from the deep that people are waiting to hear. Joye's data – and an outspoken manner for a scientist – have pitted her against the Obama adminstration's scientists as well as other independent scientists who have come to different conclusions about the state of the Gulf. She is consumed by the idea that she – and other colleagues – are not really being heard."It's insanely frustrating," Joye says.

She never expected to be a science dissident, she says, or gain such a large public profile. She sees herself as a science nerd and a brainiac who never knew how to play, even as a child. To round off the picture of a ferocious intellect, Joye says she had a photographic memory when she was younger. Her perfect recall has faded, now that she is in her 40s, but that intensity of focus is still there.

In the past year, Joye – as well as other independent scientists – has repeatedly challenged the official version of the oil disaster put forward by the White House and other administration officials. Last May, her research team was the first to detect the presence of a vast plume of oil droplets swirling at high speed through the deep waters of the Gulf. The discovery – initially disputed by government scientists – suggested that far more oil and gas had entered the sea than they had originally estimated.

In December, Joye's team knocked down another White House claim – that the vast majority of the oil was gone – when she discovered a thick coating of oil, dead starfish and other organisms on the bottom of the ocean, over an area of 2,900 square miles.

It remains to be seen whether Joye can prove the deniers wrong. She has a new scientific paper coming out, and a return research voyage to the Gulf this week, with several more follow-up voyages scheduled this summer to areas within range of the BP well. Can she convince her fellow scientists that the majority of BP's oil is still stuck on the bottom of the ocean? How long will it remain there, and what effect will it have in the future?

It's undeniable that time has moved on since the initial disaster. After 87 days, BP engineers managed to cap the well last July. Last year's images of pelicans entombed in thick layers of crude now belong to history.

So too, very nearly, do the various investigations into the disaster. Most are complete, with blame spread between BP and other companies. Transocean owned the Deepwater Horizon oil rig. Halliburton was responsible for the cementing job on the well, which has been much criticised by investigators. However, BP executives could still face criminal charges.

The oil business in general is looking up. The Obama administration last month started issuing new permits for deepwater wells in the Gulf – the first since the BP blowout. Meanwhile, Congress has yet to act on any of the issues arising from the oil spill – from raising the liability on oil companies to strengthening environmental regulations. Senators even blocked a bill that would have given the 11 workers killed in the blowout the right to sue for damages comparable to those on land.

BP, which seemed in danger of collapse a year ago, is on the financial rebound. Ken Feinberg, the independent administrator of BP's $20bn compensation fund, says he is close to finishing compensating individuals and businesses who were hurt by the disaster – without even coming close to exhausting the $20bn. He paid out only $3.6bn last year.

The cleanup operations are also winding down, at a cost to BP of about $13bn (it has also pledged $500m to scientific research in the Gulf). The company took out an ad campaign this week to express regrets for the spill, showing a picture of shimmering Gulf waters. It could still be liable for up to $18bn in penalties and fines, however, under a US law that imposes a levy of $4,300 for each barrel of oil. But Feinberg was so upbeat he told reporters the Gulf could see a complete recovery by 2012.

Government scientists have not gone so far. A spokesman for the National Oceanic and Atmospheric Agency (NOAA) said there was "no basis to conclude that the Gulf recovery will be complete by 2012", and warned that some of the consequences of the spill may not be known for decades. The spokesman went on to note that about 60 miles of the coastline remain oiled. Tar mats continue to wash up on beaches in Louisiana, Mississippi, Alabama and the Florida Panhandle. And although Gulf waters have reopened to fishing, many oyster beds were wiped out when state authorities flushed fresh water into the Gulf in the hopes of rolling back the oil. At a public meeting last month in Biloxi, Mississippi, fishermen said they were hauling up nets full of oil with their shrimp.

So how could the disaster possibly be over, asks Joye. "You talk to people who live around the Gulf of Mexico, who live on the coast, who have family members who work on oil rigs. It's not OK down there. The system is not fine. Things are not normal. There are a lot of very strange things going on – the turtles washing up on beaches, dolphins washing up on beaches, the crabs. It is just bizarre. How can that just be random consequence?"

More than 150 dolphins, half of them infants, have washed up since the start of 2011. At least eight were smeared with crude oil that has been traced to BP's well, NOAA said, and 87 sea turtles – all endangered – have been found dead since mid-March.