Posted by ep-admin on Wednesday, 30 March 2011 in Earth Violators

The Triumph of Climate Politics

Got hope and change? 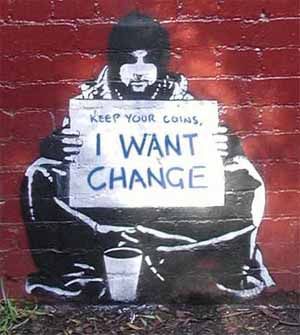 Supply-sider David Stockman was full of it in 1981 when the Reagan Revolution swept the country. Stockman, a rising star in GOP politics, became Reagan’s Director of the Office of Management and Budget and quickly began looking for ways to curtail the dreaded “welfare state.” And while I don’t agree with his pro-business slash and burn economic philosophies, Stockman found very quickly was that beltway politics (both Democrat and Republican) undercut any attempt to change business as usual. You can get the details in his memoir “The Triumph of Politics.”

But similarly, D.C.’s real climate politics have triumphed over any sort of legislative action to curtail climate change. Last summer, the climate bill died an irrelevant death in the halls of a legislative body bought and sold to a new Gilded Age of Corporate America. And remember, the end product had loopholes for corporate giveaways large enough drive a heavy haul through.

Do we really think we can outspend or out lobby these amounts of money?

Now, the big greens are telling us that an embattled Lisa Jackson and Environmental Protection Agency are our best hope (there’s that word again) for saving the planet from King Coal and Big Oil’s doomsday economy.

Does anyone really believe this bullshit anymore?

If we follow what Obama does and NOT what he says things make a lot more sense. A couple of recent examples exposing the administrations real energy politics include:

Interior Secretary Ken Salazar announced that they’d be opening up big tracts of public land for coal mining. Salazar even exaggerated the volumes of coal to where the coal companies called bullshit on him.
Peabody Energy and Arch Coal are racing to build coal export terminals on the Washington coast to export the dirty black rock to Asian markets. The Dept. of Interior just green lighted these port expansions by opening up the Powder River Basin coal tracts.
Despite the Japanese nuclear meltdown (a FUCKING nuclear meltdown!), Obama’s Nuclear Regulatory Commission extended the license of the Vermont Yankee nuclear plant. When announcing, the opening of Powder River Basin coal tracts, Salazar even told us that nuclear power was a part of America’s energy security future.
It’s time to build power and work for solutions beyond what Obama, Al Gore or Lisa Jackson can do for us. Any sort of dramatic shift on the fossil fuel doomsday economy (i.e. a real revolution) is not going to be led by those sitting comfortable (coal powered) air conditioned offices in Washington D.C. It’s going to be led by those of us in towns, cities and communities all over North America. And not necessarily in liberal bastions like San Francisco or Seattle, but in red states and conservative rural areas where the real damage is being done.

A global movement of climate justice organizers and direct actionistas has been building People Power against the root causes of climate change for quite some time. In North America, our fight to stop climate change and fossil fuel extraction is happening right now all over the country:

Appalachia- Activists have risked life, limb and liberty for years to stop mountaintop removal, and are doing it again at the historic site of the Battle of Blair Mountain in early June.
Utah- Tim DeChristopher is most likely going to prison for stopping an illegal land auction that would have drilled for oil and gas in pristine wilderness. Since his initial action, he co-founded Peaceful Uprising which has built a multi-generational multi-issue group to organize direct action on climate and extraction in the reddest of the red states. Look for more from them.
Montana and Idaho- Concerned people are putting their bodies on the line to stop tar sands heavy haul shipments to Alberta. A long history of environmental resistance has existed in this region. Now Idaho, Montana, Utah, Wyoming and other mountain regions are becoming active again.
Right now the path is very clear. The world is in upheaval and people power has taken a lead. Dictatorships have been toppled in Egypt and Tunisia. Popular uprisings are still happening in Yemen, Libya and Syria. European anti-austerity movements have emerged in Greece, Iceland, France, the UK and more. The U.S. labor movement’s rank and file has begun to challenge corporate power in Wisconsin, Ohio, Indiana, and Michigan and beyond.

At this point, we’re on our own. The political establishment manifesting as the Democratic Party and big green non-profit industrial complex won’t show any spine until we’re in the streets mobilizing them. We need to throw down with big, brash, sustained and completely anti-establishment action campaigns.