Posted by mak on Friday, 01 February 2013 in Climate Change

Is Denial the Biggest Barrier to Sustainable Change? 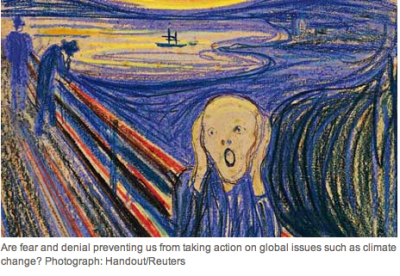 There's the old joke that denial is not a river in Egypt. However, it is the most pernicious barrier to dealing with the sustainability challenges of our age.

Now that we should be surprised, because as humans, we are particularly capable of blocking out all sorts of trauma in the hope we can hold things together just for a short while longer.

There have been a few events over the past week that have brought the issue of denial into particular focus. One was speaking privately to the chief executive of a major corporation in Davos who said that in the current difficult economic climate he was unable to talk about sustainability issues in the public domain because shareholders would view it as him taking his eye off the ball of short term profits growth.

Back in London a couple of days later, the chief executive of a major City investment firm told me of how afraid executives in the financial markets are of voicing the truth. The herd instinct is alive and well then.

Perhaps even more worrying – on the other side of the world – was the response of New South Wales premier Barry O'Farrell to the devastating floods that have followed hard on the heels of Australia's summer of unprecedented heat.

Let's not turn this near-disaster, this episode that has damaged so many properties and other things, into some politically correct debate about climate change," he said.

He is by no means alone. The sense of immense frustration among climate change negotiators and institutional leaders at Davos about the inability of those in power to stand up and be counted was palpable.

The heads of the World Bank, the IMF and the OECD met privately with political leaders and collectively told them to forget about the idea of growth if they are not prepared to deal with climate change and resource scarcity.

The talk at Davos on the final day was of World Bank president Jim Yong Kim, who focused seven of the 10 minutes of his speech to world presidents and prime ministers on the terrible catastrophe that awaits us.

Thankfully he is prepared to put his head above the parapet. In an article in the Washington Post, he could not have been clearer: "Just as the Bretton Woods institutions were created to prevent a third world war, the world needs a bold global approach to help avoid the climate catastrophe it faces today. The World Bank Group is ready to work with others to meet this challenge. With every investment we make and every action we take, we should have in mind the threat of an even warmer world and the opportunity of inclusive green growth.

He continued: "After the hottest year on record in the US, a year in whichHurricane Sandy caused billions of dollars in damage, record droughtsscorched farmland in the Midwest and our organisation reported that the planet could become more than seven degrees warmer, what are we waiting for? We need to get serious fast. The planet, our home, can't wait."

But will his clarion call fall on deaf ears? The answer, in the short term, is probably yes, and the leaders of the various institutions are at a loss as to what approach to take to get real traction.

Telling people how bad the situation is risks pushing people even further into denial as they see no way out. But false optimism masks truths that we need to confront.

Achim Steiner, the executive director of the United Nations Environment Programme, believes we need to be much more positive, showing just how far we have already come in the past 25 years and how innovation can take us to the next level. This is all well and good, but it may represent a slow burn approach at a time when we need rapid and profound change.

Perhaps the answer is to look for ideas elsewhere, and especially among professions that know how to work with addiction and trauma, for if you take the time to look deeply, collective pain is at the root of the problems we face.

Economist Jeffrey Sachs, who was in Davos to talk about his happiness agenda, knows just how important it is to take an inter-disciplinary approach. He learnt this as a young man when he was sent to cure Bolivia of hyper-inflation, and realised that a knowledge of economics alone was not nearly enough to cure a country's ills.

Sachs, who is director of the Earth Institute at Columbia University, last year held a one-day conference that included experts from a whole range of disciplines, including neuroscientist Richard Davidson, Buddhist monk Matthieu Ricard and Martin Seligman, founder of positive psychology.

The World Bank president's favourite book is the Miracle of Mindfulness by the Zen master, Thich Nhat Hanh, and the two men are likely to meet later this year.

When I interviewed Thich Nhat Hanh at his French monastery in Plum Village a few weeks ago, he said about people in general: "When they see the truth it is too late to act ... but they don't want to wake up because it may make them suffer; they cannot confront the truth. It is not that they don't know what is going to happen. They just don't want to think about it.

"They want to get busy in order to forget. We should not talk in terms of what they should do, what they should not do, for the sake of the future. We should talk to them in such a way that touches their hearts, that helps them to engage on the path that will bring them true happiness; the path of love and understanding, the courage to let go. When they have tasted a little bit of peace and love, they may wake up."

What Davos showed us is that while the battle to get climate change accepted as a reality has finally been won, unless we find innovative ways of dissolving peoples' fear and denial, we are at dire risk of losing the war.