Posted by Wolf on Sunday, 18 November 2012 in Environmental Heroes 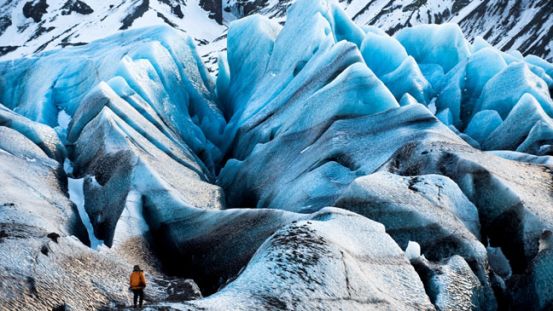 Photographer James Balog set out to film climate change by placing two dozen time-lapse cameras throughout the Arctic. The result, aside from frostbit fingers and a near helicopter crash, are stunning images of melting glaciers.

His footage is captured in "Chasing Ice," a 75-minute documentary with scenes of a house being washed away by surging water — a timely visual given Superstorm Sandy's recent rampage along the East Coast. The film opened Friday in New York City and will enter select U.S. theaters later this month.

Balog, once a skeptic of global warming, was surprised by what he and his crew found. "In the first few months, we were seeing tremendously mind-boggling change in some of the cameras," he says. "Then as a few years went on, we all started to get the feeling of, God, this is such a powerful piece of history. We've got monumental change happening in front of our eyes."

He says he wrestled a long time over how to film climate change. "My brain kept coming back to ice," he says, recalling how he settled on the idea of time-lapse photography after an assignment in the Arctic for National Geographic.

In 2007, he launched the Extreme Ice Survey and began putting cameras — initially set to shoot every hour and, later, every half hour or 20 minutes — in Alaska, Montana, Greenland and Iceland. His crew battled 150 mph winds, up to 20 feet of snow and

"We had temperatures down to minus 35 on a dogsled trip in Greenland in the wintertime. The frost bit my fingers and my nose," he says. "We had cameras destroyed by falling rocks coming off cliff faces." Other equipment was ruined by snow, foxes and ravens.

At one point, Balog broke down in tears when he realized a camera wasn't working and the project may have lost months of filming. In another scene of Chasing Ice, witnessed by film director Jeff Orlowski, who joined the expeditions, the edge of Greenland's Ilulissat glacier — also known by its Danish name, Jakobshavn — breaks off and falls into the sea below in a thunderous crash.

Scientists have used satellites for decades to document a related development: sea ice levels in the Arctic and the Antarctic. In September, the University of Colorado's National Snow and Ice Data Center (NSIDC) reported Arctic sea ice had fallen to its lowest level since measurements began in 1979, attributing the loss partly to climate change. It reported a slight increase in Antarctic sea ice but said that may also — counterintuitively — be a result of warmer temperatures.