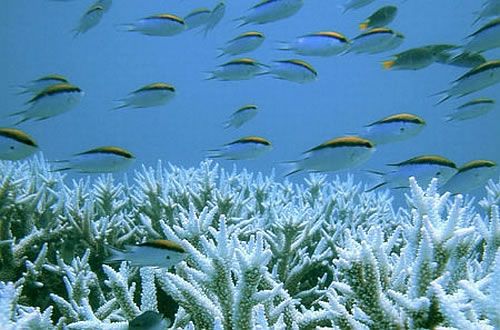 The expansion of European settlement in Australia triggered a massive coral collapse at the Great Barrier Reef more than 50 years ago, according to a new study.

The study, published Nov. 6 in the Proceedings of the Royal Society B, found that runoff from farms clouded the pristine waters off the Queensland coast and killed the natural branching coral species, leaving a stunted, weedy type of coral in its place. The findings suggest that decades before climate change and reef tourism, humans were disrupting the ecology of the Great Barrier Reef.

"There was a very significant shift in the coral community composition that was associated with the colonization of Queensland," said study co-author John Pandolfi, a marine biologist at the University of Queensland Australia.

Europeans began to colonize Queensland, Australia, in the 1860s, cutting down forests to make way for sheep grazing and sugar plantations. By the 1930s, large amounts of fertilizer and pesticide-laden runoff poured from rivers into the nearby ocean.

Several recent studies have shown that snorkelers and climate change kill coral, and one study found that half of the majestic Great Barrier Reef has vanished over the last 30 years.

But Pandolfi's team wondered whether humans had been altering reef ecology for much longer.

To find out, the team drilled sediment cores, 6.5 to 16.5 feet long, from the seafloor at Pelorus Island, an island fringed by coral reefs off the Queensland coast. When coral dies, new coral sprout on the skeletons of old organisms and ocean sediments gradually bury them in place, Pandolfi told LiveScience.

By dating different layers of that sediment, the team reconstructed the story of the reef.

The fast-growing Acropora coral dominated the reef for a millennium. This massive, three-dimensional coral can grow to 16 feet high and span 65 feet across, forming a labyrinth of nooks and crannies for marine life to hide in, Pandolfi said.

"They're like the big buildings in the city, they house a lot of the biodiversity" he said.

But somewhere between 1920 and 1955, the Acropora stopped growing altogether and a slow-growing, spindly coral called Pavona took its place.

That spelled trouble for the panoply of animal species that shelter in the reef, and for the nearby coastline, because the native Acropora species provide wave resistance to shelter harbors.

The team believes that over time, polluted runoff clouded the normally pristine Pacific water and poisoned the native species. The same polluted water fueled an algal bloom that choked out the native coral species when they tried to grow back, he said.

While the findings suggest humans have been damaging reefs far longer than previously thought, the problem has a straightforward, local solution: Reduce polluted runoff into the ocean, Pandolfi said.

"Any kind of measures that are going to improve the water quality should help those reefs to recover."