A Plan to End Deforestation by 2020 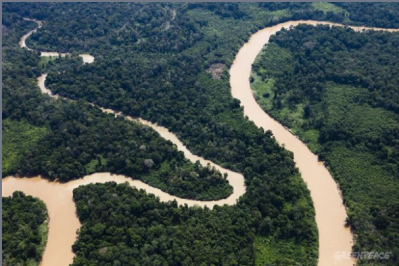 Greenpeace reiterated its call for an end to deforestation in Brazil by 2015 and globally by 2020 during its launch of an awareness-raising expedition down the Amazon River aboard the Rainbow Warrior.

Brazil is now the sixth largest economy in the world, the largest meat exporter and second largest grain exporter. Brazil's rise to become the world's sixth largest economy coincided with consecutive years of decline in deforestation in the Amazon," said Kumi Naidoo Greenpeace International Executive Director. "Brazil must lead as an example of sustainable development without forest destruction for other forest countries like Indonesia and the Congo."

The Greenpeace voyage is timed to end in Rio around the start of the Rio+20 conference on sustainable development. The conference is expected to attract thousands of business and political leaders, as well as scientists, activists, and academics.

While the annual deforestation rate in the Brazilian Amazon has fallen by nearly 80 percent since 2004, environmentalists fear the country's politicians may backslide on their commitment toward greener economic growth.

"Brazil could be the example of an economic super power that continues to grow without recklessly destroying the forests. However, actions over the past year by President Dilma and the Brazilian congress show that we are at risk of failing to achieve this," said Paulo Adario, Greenpeace Brazil's Amazon Campaign Director. "It will only be with a strong legal framework that Brazil will have the necessary tools to continue to fight deforestation."

Greenpeace has therefore launched a petition calling for a "zero deforestation" law in Brazil. It is seeking 1.4 million signatures of Brazilian voters for the initiative.

You can take ACTION here by signing the petition.