Posted by brian carter on Saturday, 28 September 2013 in Environmental Heroes 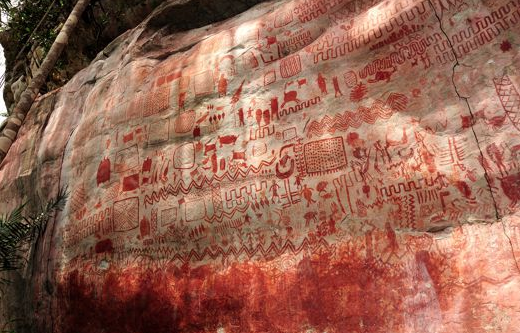 To kick-off this year’s Clinton Global Initiative Annual Meeting in New York, the Skoll World Forum asked some of the world’s leading experts on deforestation, public health, religion, development and the post-2015 MDGs to help set the stage for this week’s discussions on mobilizing for impact. Contributors include the Amazon Conservation Team, the Segal Family Foundation, Friends of the Global Fight Against AIDS, TB and Malaria, the World Food Programme, UNICEF, the Tony Blair Faith Foundation and more. View the whole series here.

The most fragile of Amazonian cultures are the isolated indigenous groups, those few “lost tribes” that have chosen to avoid contact with the outside world. The recent historic record amply demonstrates that contact can devastate these hunter-gatherer bands: within a few years of making contact, 50% of the Nukak tribe of the northwest Amazon and 80% of the Akuriyo tribe of the northeast Amazon had perished. And these fatalities were not equally distributed among all age groups: the most vulnerable were the very young and very old. When the elderly members of a small tribe die, because they typically are the repositories of tribal knowledge, much of the culture disappears with them.

Sooner or later, contact for still-isolated groups is all but inevitable. And recent history very likely predicts their future: they will be “civilized” through settlement in large sedentary villages of other tribes. Once there, their changes in diet, lack of agricultural knowledge, and exposure to disease will prove disorienting and disheartening. Through the deaths of the elders and intermarriage into the dominant tribe, their culture will begin to rapidly disintegrate.

The Amazon Conservation Team (ACT) has chosen to help prevent this destructive process in a constructive way. For several years, we have been sponsoring the work of Colombian anthropologist Roberto Franco, a noted authority on the isolated tribes of the northwest Amazon. Roberto recently produced an extraordinary book—Cariba Malo— detailing the history and very likely current status of these remote Indian tribes. His efforts—supported by other ACT colleagues in Bogotá and in the Colombian government—have resulted in important new legislation protecting these remaining groups and the rainforests they inhabit.

An extremely positive recent development is the expansion of Colombia’s Chiribiquete National Park from 13,000 km2 to over 27,000 km2, making it larger than the state of Massachusetts and one of the largest rainforest reserves in the world. This resulted from the joint of institutions including the Colombian National Park Service, the Puerto Rastrojo Foundation, and the Colombian Academy of Sciences as well as individuals including Carlos Castaño, Patricio von Hildebrand, Diana Castellanos, the aforementioned Roberto Franco and, ultimately, the President of Colombia himself.

More than simply a vast geography, Chiribiquete is home to many strange and wonderful species: a unique hummingbird, many endemic species of plants, and flourishing populations of mammal species which have been decimated or extinguished in other parts of the Amazon. Research just south of the park by New York Botanical Garden scientists turned up a species of tree from the Dipterocarpaceae family that was previously believed to only occur in Africa and Asia. And thorough scientific investigations have yet to be conducted in the vast majority of the unknown forests of Chiribiquete.

The numinous landscape of Chiribiquete strikes awe in all who visit. Ageless, inviolate, seemingly eternal, it is as pristine a rainforest as exists on earth. Chiribiquete is honeycombed withtepuys—often dubbed “Lost World” mountains—as well as giant granitic domes, waterfalls, rapids, canyons, caves, and unspoiled rivers.

A member of a boundary commission sent to the region in 1911 was so captivated by the sheer majesty of the landscape that he wrote of the Ajaju River that runs through Chiribiquete:

[It] is a beautiful river and different from all the others of the region. Its curves are majestic, and from each one arises enormous and fantastic rock formations that resemble ruins of feudal castles or enormous statues carved by the Cyclops but beginning to deteriorate with the passing of the ages.

Small table mountains divided like a chess board that has cracked into different sections and, finally, a whole range of fantastic figures that make this the most breathtaking landscape in the Amazon.

The great ethnobotanist Richard Evans Schultes carried out the first botanical collections of Chiribiquete in May of 1943. Even the sober-minded Schultes was gripped by the bizarre and beautiful landscape:

…the isolated quartzitic mountains of [Chiribiquete] are sentinels of a mysterious past. The Cerro de la Campana is one of the westernmost vestiges of these hills and is so strikingly awesome that it is wrapped in legend in the Indian mind….

Over a half century after he climbed Cerro Chiribiquete, Schultes remained deeply impacted by his encounter with these mountains and this rainforest. He kept a magnificent photograph he had taken of Chiribiquete over his desk at Harvard as a constant reminder of this enchanted land. And he told his student and future biographer Wade Davis that these eerie rock formations seemed like giant sculptures left over from God’s workshop: “It was from these first tentative experiments,” Schultes mused, “that He had gone out and built a world.”

Aside from this august geography, Chiribiquete also features other stunning wonders: the greatest assemblage of Pre-Columbian paintings in all of Amazonia, containing hundreds of thousands of depictions of people, animals, shamans, hunters, and dancers. Such is the magnitude, realism, and beauty of these creations that Carlos Castaño, former director of the National Park System and the leading authority on Chiribiquete, reports that he nearly fainted when he first saw them up close. The late Thomas van der Hammen, a Dutch Colombian biologist was so struck by the illustrations that he termed Chiribiquete “the Sistine Chapel of the Amazon.”

Research led by Castaño and van der Hammen in the early 1990s found as many as 8,000 paintings on a single wall. Archaeological dating methods at the time were much less sophisticated than today, and estimates are that the art was created at least hundreds of years ago, and possibly as far back as 18,000 BCE. Conflict with Colombian guerillas brought a halt to research in the mid-1990s, and only recently have scientists been able to return. Still, the art of Chiribiquete still holds many mysteries. Its sheer beauty and spiritual import, though, is without question. In nominating Chiribiquete for consideration as a UNESCO World Heritage Site, the Colombian team wrote:

Chiribiquete is the largest, densest pictographic archeological complex of northern South America, a masterpiece of human creative genius because of the aesthetic refinement of the paintings and a monument of universal value because of the anthropological importance of representations of hunting, dancing, and mythological scenes.

No one has inhabited these sites for many, many years. The Amazonian Picassos who painted these masterpieces are believed to have been members of the Karijona tribe, a once fierce and populous group. A Spanish soldier who visited the region in the 1790’s estimated a population of about 15,000 Karijonas. Introduced diseases in the 19th century decreased the numbers of Karijonas to around 10,000. The turn of the 20thcentury brought the evils of the rubber boom when groups like the infamous Casa Arana killed, enslaved, and mutilated thousands of Karijonas and other neighboring tribes.

According to Roberto Franco, an anthropologist who consults with the Amazon Conservation Team, by 1920 the Karijonas had dwindled to around 1,000, and today—sadly—only 60 remain.

Here again, Chiribiquete may be hiding secrets: research flights over the region have revealed the presence of one and as many as three isolated Indian tribes. In the past, South American governments would contact and acculturate isolated or uncontacted Indian tribes, claiming that they were helping the Indians integrate successfully into the outside world. All too often, this contact resulted in cultural disintegration and sometimes outright extinction. The Colombian government recently passed a law—decree 4633—making it illegal to contact isolated peoples or to destroy their environment. Roberto Franco surmises that one of these “lost tribes” in Chiribiquete is comprised of Karijonas living a traditional lifestyle.

There exist several detailed accounts of what these early Karijonas were like and how they lived. These Indians were noted for, among other things, rowing their canoes while standing, wrapping their chests and abdomens in beaded belts, and piercing their nasal septum with animal bones. And a paper by a German expert on Karijona culture and history wrote: “none of the extensive reports on the Karijonas fail to mention they were cannibals and that for this reason they were continually at war with the neighboring Witoto….”

I met an old Karijona once who was living in the little village of Cordoba on the Caquetá River, far from his original homeland of Chiribiquete. One of the 60  Karijonas remaining from the group decimated by diseases and the rubber boom, he was a wonderful old man, a great storyteller, and a boon companion. He told me that Chiribiquete was the heart and soul of the Karijona culture, and that he wanted to visit one more time before he died. He fervently believed there were Karijonas still living in the rainforests of Chiribiquete. I asked him if they would be fierce people, and he replied:

In the old days, we fought and killed many whites from the rubber company. But, more than the whites, we killed Witotos who were our traditional enemies. We used to be cannibals, you know, so those who would defile Chiribiquete should be warned!

In any case, the expansion of the Chiribiquete National Park is a cause for celebration everywhere. At a time of accelerating climate change and deforestation, the Colombian people have made a bold and positive step forward. So constructive was this step that it drew comment in the U.S. Senate, not exactly a hotbed of environmentalism these days. Senator Patrick Leahy of Vermont said:

To its credit, Colombia has an extensive system of national parks and biological reserves.  I have long been convinced that as security improves in that country and long after the oil wells are depleted, its national parks and other protected areas will be among Colombia’s greatest resource, attracting eco-tourists from around the world.

On August 21st, President Santos took an historic leap forward by doubling the size of Chiribiquete National Park, which is home to a myriad of species including jaguars and is comprised of extraordinary rock formations and dense jungle.  Chiribeiquete was already Colombia’s largest park, and it has now become the size of Belgium.

There is more that needs to be done to protect Colombia’s environment, particularly from the damage caused by mining and other extractive industries which has often occurred in, or ajacent to, environmentally fragile areas or indigenous reserves.

But President Santos’ single stroke of the pen has done more for environmental conservation and species protection than what most heads of state do in a lifetime.  I commend him for it and congratulate the Colombian people.  Colombia has set an example for all of us who care about the environment and recognize that we have a responsibility to protect it for future generations.