Posted by Calle on Tuesday, 24 June 2014 in Clean Technology 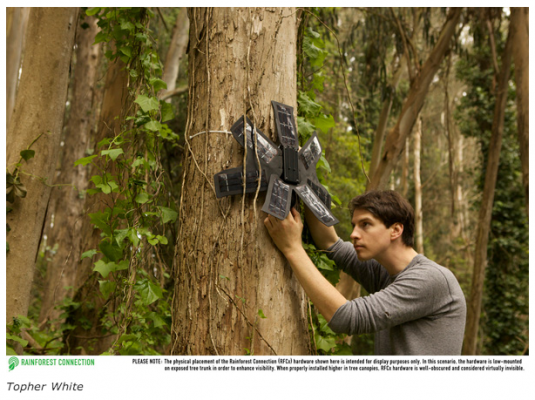 A technology that uses discarded mobile phones to create a real-time alert system against logging and poaching will soon be deployed in the endangered rainforests of Central Africa. Rainforest Connection (RFCx), a San Francisco-based non-profit startup, is partnering with the Zoological Society of London (ZSL) to install its real-time anti-deforestation technology at sites in Cameroon. 30 RFCx devices — recycled from old Android handsets — will monitor 10,000 hectares or nearly 40 square miles of rainforest, listening for audio signals associated with logging and poaching. When the whir of a chainsaw, a gunshot, or the sound of a logging truck is detected, the system automatically alerts local authorities who can take action as the environmental crime is being committed. 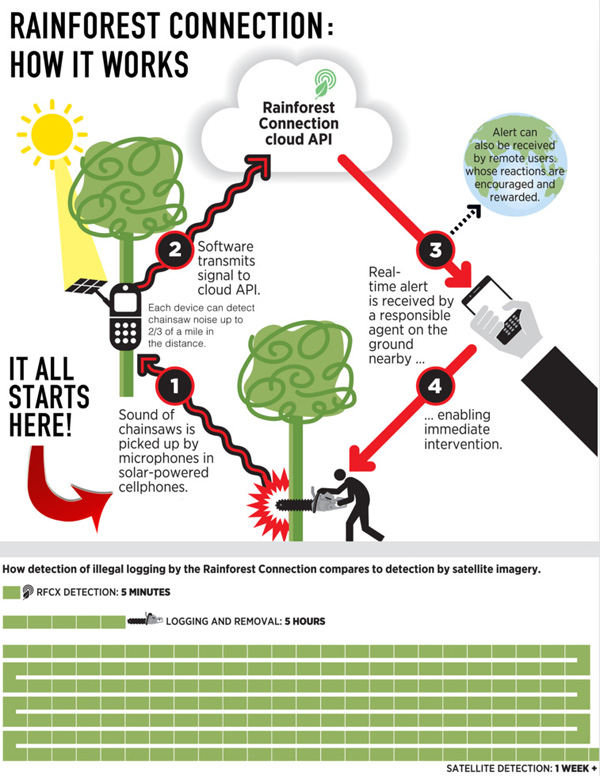 Rainforest Connection's system is powered by a network of Android smartphones, each of which driven by an array of solar panels that are designed for low-light conditions of the rainforest canopy. The units are durable to ensure they can survive hot and humid conditions for years. That durability, combined with the low cost of the units and the increasing ubiquity of mobile networks, means that the potential of the system is vast, according to Rainforest Connection founder Topher White. “It’s clear that real-time awareness and intervention is a major missing piece in protecting the world's last remaining rainforests," said White in a statement. "By using old smartphones and existing telecommunications infrastructure, we have built a system that should scale quickly enough to make an impact." Rainforest Connection field-tested the system last year in Indonesia's West Sumatra. While that project was intended only to probe the feasibility of the system, it immediately served its broader purpose, catching illegal loggers in the act two weeks after it was installed. White says the loggers haven't returned in the year since. "We have shown (in this one case) that knowledge of the system has deterred logging activity in the protected area," he told Mongabay.com. 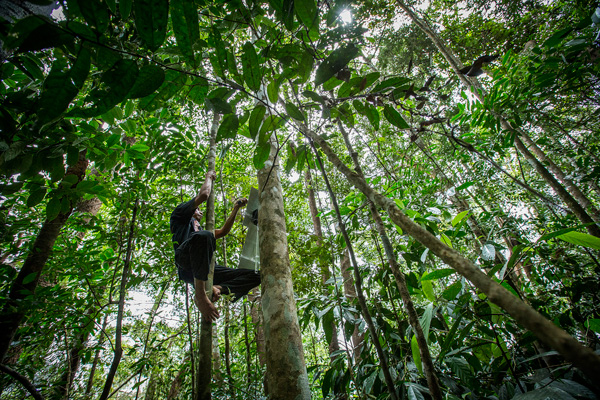 Installing a RFCx device in Sumatra. Courtesy of Rainforest Connection In the case of Cameroon, the system will be listening for a number of sounds, including off-hours movement of trucks, which could indicate timber smuggling. "To be blunt," said White, "providing an accounting for corruption within the concession—including illegal logging by those who work there—is amongst the primary goals of the pilot." The sensors will also try to pick up elephants as they move through the forest. ZSL, which operates projects across the tropics, says it excited about the prospect of real-time monitoring. "We think this could be a critical new tool for protecting large areas of rainforest," Chris Ransom, Programme Manager for ZSL. "We’re excited to deploy it this year in collaboration with our local partners in Africa."

Rainforest Connection is hoping to scale the platform well beyond Cameroon and West Sumatra. Coinciding with the announcement of the ZSL partnership, Rainforest Connection launched a $100,000 KickStarter campaign that would support deployment in African and South American rainforests. Beyond knowing that they are helping protect endangered forests and animals, supporters can receive various rewards, including instructions on how to build their own RFCx device.

The potential payback of the system is immense. White estimates that RFCx device offers the greenhouse gas emissions-equivalent to taking 3,000 cars off the road for a year.

"Each RFCx device 'protects' 300 hectares," he explained. "Emissions from logging are 50 tons of carbon dioxide per hectare, translating to 15,000 tons per device."

Rainforest Connection's tool is part of an emerging suite of monitoring technologies that are being applied to conservation. For example, authorities in places like Brazil are putting motion sensors on trees, while researchers globally are using camera traps and satellite imagery for a wide range of applications. Scientists are even outfitting hobbyist model airplanes outfitted with sensors and cameras to track wildlife, find poachers, and detect deforestation and fires.

White says he hopes to extend Rainforest Connection's capabilities leveraging some of these technologies.

"We are considering extending our range with small long-distance fixed-wing drones, which can fly-by several times per day and pick up data in bulk, re-transmitting it when they come within GSM range," he said.