Posted by amir on Tuesday, 29 January 2013 in Climate Change 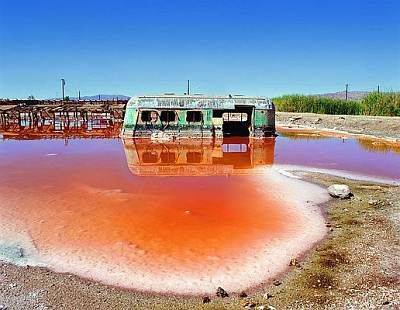 California Is Acting On It

The Salton Sea area of the Imperial Valley in California, was once a thriving tourist destination, but deteriorated as the sea, which was created by the Colorado River, died from pollution and dried out from the effects of global warming.

It’s not the happiest time to be an environmentalist. Climate change hit home last year with brutal force: 2012’s historic drought singed much of the Midwest, turning farms to dust and withering the corn crop. Other parts of the U.S. suffered through storms like Sandy and massive wildfires. Average annual temperatures in the continental U.S. beat the previous recorded high by a full 1°F (1.8°C). And the future is uglier still: over the weekend, the British economist Nicholas Stern warned that climate change could be even worse than he predicted in his sobering 2006 report on the financial impact of warming, while on Jan. 28 the National Oceanic and Atmospheric Administration (NOAA) released a draft report outlining the serious threat that sea-level rise poses to the coastal U.S.

So, logically, 2013 should be the year the U.S. finally gets serious about dealing with the man-made greenhouse-gas emissions that drive warming. And greens could take some hope in President Obama’s inaugural address on Jan. 21. “We will respond to the threat of climate change, knowing that the failure to do so would betray our children and future generations,” Obama told his audience. But whatever the President’s intentions, political realities—including a House led by Republicans who want nothing to do with climate change legislation—will limit his scope of action. At most, the White House may be able to tweak the tax code or spend more on research for clean energy. Useful policies, but nothing as comprehensive as the climate legislation that was introduced—and ultimately defeated—during Obama’s first term.

But if environmentalists look west from Washington—about 2,728 miles west—they’ll see reason for hope. On Jan. 1, after years of preparation and legal battles, California launched a carbon cap-and-trade system, establishing a declining limit on the state’s greenhouse-gas emissions. That means that the most populous state in the U.S. and the ninth biggest economy in the world has legally committed itself to reducing its carbon emissions to 1990 levels by 2020.

While cutting California’s carbon emissions alone might not make a big dent in climate change—the state is responsible for perhaps 1% of global emissions—the success or failure of the state’s environmental experiment may well decide whether national or even international action on global warming ever becomes a reality. “California is a big economy, and it is very diverse, like the U.S. as a whole,” says Mary Nichols, chairman of the California Air Resources Board (CARB), which is overseeing the cap-and-trade system. “If it can work in California, it can work in the U.S.”

The challenge will be getting it right. California’s government isn’t the first to try to put a cap-and-trade program in place. In 2005 the European Union launched its Emissions Trading Scheme (ETS), a system that covered large factories and power plants in 31 countries throughout the continent. But while European emissions have declined since ETS was launched, the system has been troubled. The price of carbon permits on the open market crashed in 2007, in part because the cap was set too high and companies were given too many free permits. That didn’t stop utilities from raising electricity prices, ostensibly to cover the cost of complying with ETS, allowing them to rake in windfall profits. The E.U. “gave the carbon permits away, and then they were outraged when companies raised their prices,” says Severin Borenstein, a co-director of the Energy Institute at the University of California, Berkeley. “Economists could have told them that would happen.” Regulators have closed some of those loopholes in ETS, but the still operational trading system continues to suffer from its wobbly launch.

California, which has been working on cap and trade since 2006, has the advantage of hindsight. CARB has been collecting data on carbon emissions for years, which should help regulators set an accurate carbon cap—not too high and not too low. Offsets can make up no more than 8% of a company’s carbon responsibility, and the state is tightly regulating the programs that manage them. Most important, California will auction a portion of carbon permits to companies each year rather than giving them all away. That should limit windfall profit-taking by utilities, as will a requirement that California households receive a dividend twice a year from the money raised by the carbon system. “The auction prevents companies from banking their permits and then passing on the price to customers,” says Tim O’Connor, director of the Environmental Defense Fund’s California Climate and Energy Initiative. “It helps protect the integrity of the entire program.”

California held its first auction for carbon permits in November, and the results were mostly promising for the future of the system. The available permits for 2013 fully sold out, indicating that companies are taking the system seriously. But the permits sold at just above the regulated price floor of $10 per ton of carbon, and permits for 2014 and 2015 did not fully sell out. That relatively low market price for carbon may actually be a good thing, indicating that the cap is set at a realistic level that companies think won’t be too difficult or expensive to meet. (If businesses anticipated that the cap would be too low, they would have purchased more permits, driving up the market price of carbon.) But the unsold 2014 and 2015 permits could also indicate that businesses believe California might eventually back off from capping carbon, especially if the state’s economy struggles or if climate-skeptic Republicans take back Sacramento. “There’s definitely some regulatory risk reflected in the market, especially projecting forward,” says Olga Chistyakova, a senior analyst at Thomson Reuters Point Carbon. “That’s putting a downward pressure on prices.”

That worry may not be misplaced. The November auction went forward despite a lawsuit filed by the California Chamber of Commerce that contends the sale of permits constitutes an illegal tax, but the legal woes add to worries about the long-term viability of the system and its impact on California’s still shaky economy. “We already have state electricity costs that are 50% higher than the national average and declining investment in manufacturing,” says Dorothy Rothrock, vice president of government relations for the California Manufacturers and Technology Association. “You’re going to go backward on the economy.”

It’s true that cap-and-trade may squeeze the margins of fossil fuel businesses—though the state’s relatively lenient cap should reduce that impact. But it should also benefit clean-tech industries like solar and lithium-ion batteries—a sector of the economy in which California, with the help of Silicon Valley’s capital and innovation, is already lapping the rest of the country. Either way, the reality is that with cap-and-trade, California is embarking on an economic and environmental experiment. For all his bold talk on global warming during his inaugural address, President Obama has also said that he “won’t ignore jobs and growth simply to address climate change.” During a time of deep economic insecurity, climate action will be politically viable only if it can accompany prosperity, not interfere with it.

California is the natural place for that experiment to be carried out. From smog regulations to energy-efficiency standards, the Golden State  has always led the way on environmental policy, with the rest of the country eventually following—sometimes kicking and screaming. “Climate change is only going to be solved if everyone gets involved,” says O’Connor. “But the world’s ninth largest economy doing something can only help.” If Obama’s words on warming are ever going to be more than just that, California’s climate dream needs to become a reality for the rest of us.