Posted by plantitfilm on Sunday, 31 March 2013 in Agriculture

America Wakes Up with the 'Monsanto Protection Act' 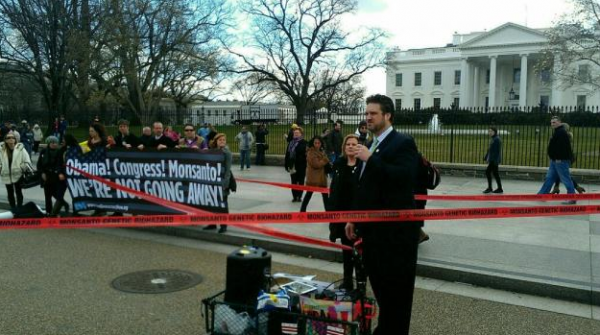 The American public has slowly awakened over the past several years to the creep of genetically modified and genetically engineered crops into the food supply.

Now a provision in a bill signed into law Tuesday by President Barack Obama has thrust GMOs into the spotlight, prompting food advocacy groups, agribusiness and GMO-producing corporations to scramble to capitalize on the moment and promote their sides of the debate.The issue probably first gained widespread attention with the 2006 arrival of Michael Pollan’s groundbreaking book “The Omnivore’s Dilemma,” which introduced concerns about the potential dangers of these biotechnologies to a wide audience.

Then in 2009, director Robert Kenner released “Food, Inc.,” an Oscar-nominated documentary that picked up where Pollan left off, providing a concise entrée into a number of food-related issues, including the possible impacts of the rising prevalence of GMOs.

The documentary focused largely on the Monsanto Company, the huge multinational chemical/biotech corporation that has taken most of the heat in the various controversies regarding GMOs in the food supply.

And the issue reared its head as the focus of great concern once again this week. Obama quietly signed the HR 933 continuing resolution on Tuesday, while the nation’s attention was focused on gay marriage’s day before the U.S. Supreme Court.

The bill was needed for the federal government to avoid imminent shutdown and pay its bills, but Section 735, which was quietly slipped into it, has come under fire as food, environment and consumer advocacy groups warn that it will cripple the government’s ability to protect the food supply.

Section 735 -- branded the “Monsanto Protection Act” by its opponents -- strips federal courts of the authority to halt the sale and propagation of genetically modified seeds and crops if concerns about health risks arise during safety tests.

Monsanto found its name attached to the proviso when it came to light that Sen. Roy Blunt, R-Mo., worked directly with Monsanto to write Section 735, as the New York Daily News has reported.

Because the provision is attached to a continuing resolution that only lasts for the next six months, it is not yet a permanent part of federal law, but opponents fear it will find its way into another law in the near future.

Dave Murphy, executive director and co-founder of Food Democracy Now, actually coined the term “Monsanto Protection Act,” and he has been leading a campaign since last year to make sure the provision didn’t find its way into law.

Food Democracy Now undertook a petition drive that gathered more than 200,000 signatures from people who wanted Obama to veto HR 933 in light of its inclusion of Section 735, and Murphy and others protested in front of the White House both before and after Obama declined to do so.

Murphy spoke with International Business Times via phone Thursday about his concerns about the effects of the “Monsanto Protection Act,” and how it fits into the larger GMO fight.

His basic argument is that Monsanto and other leading GMO companies like DuPont and Syngenta have wielded their considerable lobbying clout and political donations to sway members of Congress into introducing and passing legislation that creates an oversight-free environment for their products and activities.

Murphy says the so-called “Monsanto Protection Act” is just the most recent iteration of this trend.

“This is Monsanto’s dirty little secret. This is how they work behind the scenes in closed-door meetings to basically write regulations that benefit their company and the rapid approval of their GMO, biotech products,” Murphy said. “They’ve basically avoided any serious scientific scrutiny of their crops, which has been why they’ve been adopted by farmers here in the U.S. … It’s the illusion of oversight here in Washington, D.C.”

And that atmosphere of lax regulation surrounding GMOs has health consequences in the real world, Murphy argues.

Most of the world’s advanced nations -- from the European Union to China and Russia to Saudi Arabia and Peru -- require that products containing GMOs be labeled as such, while the United States, Mexico, Canada and others have failed to institute such a requirement on manufacturers.

Murphy says the failure to institute even as modest a measure of consumer protection as required GMO labeling has real consequences for public health.

As evidence for this assertion, he points to an independent 2011 study by a team of doctors at the Department of Obstetrics and Gynecology at the University of Sherbrooke Hospital Centre in Quebec, Canada.

The study looked at the prevalence of Bt toxins in female patients, finding that the chemicals -- which are often implanted into GMO crops including corn -- were found in the majority of those who were surveyed.

The study looked at a small sample of Canadian women and determined that of those who were pregnant at the time of the survey, 93 percent of them had traces of Bt toxin in their blood, and 80 percent of their umbilical cords contained the chemical.

Murphy says that is just one example of why the spreading use of GMOs should be subject to independent scrutiny, as well as why authorities need to have as many tools as possible to ensure that they are safe for consumption. The codification of the “Monsanto Protection Act” goes against that argument, Murphy says.

“Openness and transparency are the bedrock of a transaction for the consumer, and Monsanto has blocked that at every turn for the past 20 years,” he said, adding later that “it’s not acceptable for corporations to write loopholes that benefit them and put the American farmer and the public at risk.”

Thursday evening, as Monsanto yet again found itself at the center of a storm of controversy with the passage of HR 933, Kelly J. Clauss, a spokeswoman for the company, spoke with IBTimes via email to tell its side of the story.

The industry and supporters of Section 735 refer to it as the “Farmer Assurance Provision,” a moniker that points to their arguments about why the provision is beneficial.

“As we understand it, the point of the Farmer Assurance Provision is to strike a careful balance allowing farmers to continue to plant and cultivate their crops subject to appropriate environmental safeguards, while USDA conducts any necessary further environmental reviews,” Clauss explained.

Clauss' comments jive with statements made by Sen. Charles Grassley, an Iowa Republican who actually ended up voting against HR 933, about why the provision provides a benefit to American farmers.

“I don’t see it other than a process of Congress trying to give farmers some confidence that when they get an ‘okay’ from the Agriculture Department that they can plant a crop and then some judge comes along with an injunction saying you can’t harvest that crop because USDA screwed up and issues an injunction and then the farmers are forced to destroy their crop,” Grassley said Wednesday, according to Brownfield Ag News.

And Richard L. Lobb, managing director of the Council for Biotechnology Information trade group, argued in a Thursday email to IBTimes that rather than harming consumers, GMOs and GEs are actually a net positive for farmers and the American public.

“The safety of foods made with ingredients from genetically engineered plants has been well-documented in hundreds of scientific studies and food safety reviews,” he wrote. “We understand that the Center for Food Safety and other activist groups are eager to seize upon any development they can find to raise spurious concerns about GE crops.  However, literally trillions of meals with GE ingredients have been consumed since these crops were first commercialized in 1996, with no ill effects on anyone attributable to genetic engineering, and that safety record will continue.”