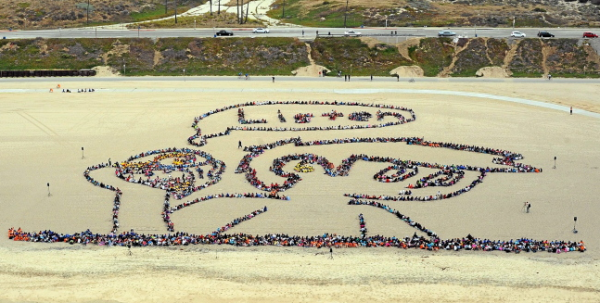 Thirteen-year-old Adam Mendoza wants everyone to listen to the ocean.

"It's calling for our help," said the South El Monte resident.

The Monte Vista Elementary eighth-grader's simple drawing of a kid holding a shell and a talk bubble that says 'LISTEN' won a contest held by The Malibu Foundation for Environmental Education.

The image was recreated Thursday in large scale with students and volunteers during the 20th Kids Ocean Day Adopt-A-Beach Clean-Up. The event is a project of the Foundation, a non-profit organization specializing in school outreach and coastal quality issues.

During Kids Ocean Day, more than 3,500 students and adult volunteers from throughout Southern California including the entire 7th grade class from Monte Vista, helped clean up trash and debris at Dockweiler State Beach.

"We were racing to pick up the trash. It was fun," said Nancy Castro, Monte Vista seventh-grader.

An aerial photograph of the participants creating the image was taken and will be used in future foundation campaigns.

"It was extraordinary," said the young Mendoza of seeing all the students line up for the image.

"Going from something so small that I drew, then so big; it was awesome," said the animation art enthusiast.

The appreciation of the beaches and oceans is the value that drives the Foundation to outreach to underserved communities in Los Angeles. Thursday's event aims to raise awareness on the adverse impacts of litter and pollution on the ocean.

The Malibu Foundation is dedicated to a sustainable and healthy planet for all life by educating and motivating people into action.