Posted by Dale on Saturday, 25 May 2013 in Ocean/Seas/Coastlines 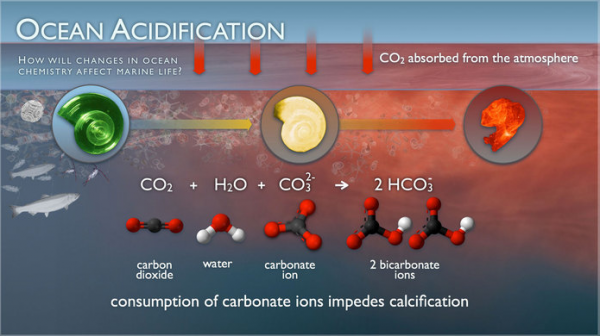 About 55.5 million years ago, geologically rapid emission of a large volume of greenhouse gases at the Paleocene-Eocene boundary (PETM) led to global warming of about 5oC, severe ocean acidification, and widespread extinction of microscopic organisms living on the deep-sea floor (foraminifera).

A study of survivors of the extinction provides unique insight into the response of deep-sea calcifiers to past episodes which resemble the potential future consequences of fossil fuel CO2 emissions. The organisms, contrary to expectations from experiments, actually increased the thickness of their shells during ocean acidification, with organisms living buried within the sediment able to survive better than forms living on the sediment surface.

The research, by scientists from the University of Bristol (UK) and Yale University (USA), is reported in this week's early edition of the Proceedings of the National Academies of Science.

The team used Synchrotron Radiation X-ray Tomographic Microscopy (SRXTM) at the TOMCAT beamline at the Swiss Light source, Paul Scherer Institute (Switzerland) to generate high resolution (0.37 µm), 3D images of deep-sea benthic foraminifera, unicellular organisms which make fossil shells of about the size of the full-stop at the end of this sentence.

This non-destructive technique was used to understand the effects of ocean acidification on the growth of deep-sea calcifiers during the massive ocean acidification of the PETM, when an estimated 35-50 per cent of deep-sea benthic foraminifera went extinct. The team studied the most common surviving species, evaluating what might have enabled them to cope with extreme ocean acidification. The PETM has been described as one of the best analogues for anthropogenic carbon emissions, despite its rate of emission estimated at an order of magnitude slower than today’s.

Dr Laura Foster, first author of the paper, and post-doctoral researcher at the University of Bristol’s School of Earth Sciences, explained: “We use state-of-the-art techniques to virtually section foraminifera, and gain insight in their shell construction, duration of life and mode of reproduction. We have much to learn about and from single-celled organisms, which serve as monitoring organisms for deep-sea calcifiers in general, and their response to past ocean acidification. They are a crucial part of the huge deep-sea oceanic ecosystem, and understanding what happened to them during acidification in the past is critical to improving projections on the effects of future climate change.”

Dr Daniela Schmidt, a Royal Society Research Fellow at Bristol’s School of Earth Sciences, added: “Short-term experiments cannot provide information on ways in which organisms can acclimatise, adapt or evolve in the long term. We used the geological record to examine the impact of multiple stressors, such as changes in carbonate chemistry and temperature, to provide information on how organisms adapt to large CO2 releases.”

Professor Ellen Thomas from Yale University, co-author on the paper and currently a visiting Leverhulme Professor at the University of Bristol added: “The calcite shells of benthic foraminifera are widely used to measure trace elements and isotopes used to reconstruct such parameters as temperature and carbonate saturation. The methods developed at the University of Bristol to gain insight in the 3D structure of microscopic fossils are crucial in increasing understanding of such environmental proxies, as well as the organisms themselves.”