Posted by Dale on Wednesday, 30 April 2014 in Ocean/Seas/Coastlines

Ocean Acidification To triple by 2050 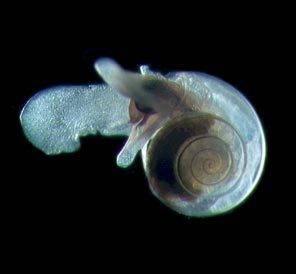 A NOAA-led research team has found the first evidence that acidity of continental shelf waters off the West Coast is dissolving the shells of tiny free-swimming marine snails, called pteropods, which provide food for pink salmon, mackerel and herring, according to a new paper published in Proceedings of the Royal Society B.

"Our findings are the first evidence that a large fraction of the West Coast pteropod population is being affected by ocean acidification," said Nina Bednarsek, Ph.D., of NOAA's Pacific Marine Environmental Laboratory in Seattle, the lead author of the paper. "Dissolving coastal pteropod shells point to the need to study how acidification may be affecting the larger marine ecosystem. These nearshore waters provide essential habitat to a great diversity of marine species, including many economically important fish that support coastal economies and provide us with food.

The term "ocean acidification" describes the process of ocean water becoming corrosive as a result of absorbing nearly a third of the carbon dioxide released into the atmosphere from human sources. This change in ocean chemistry is affecting marine life, particularly organisms with calcium carbonate skeletons or shells, such as corals, oysters, mussels, and small creatures in the early stages of the food chain such as pteropods. The pteropod is a free-swimming snail found in oceans around the world that grows to a size of about one-eighth to one-half inch.

The research team, which also included scientists from NOAA's Northwest Fisheries Science Center and Oregon State University, found that the highest percentage of sampled pteropods with dissolving shells were along a stretch of the continental shelf from northern Washington to central California, where 53 percent of pteropods sampled using a fine mesh net had severely dissolved shells. The ocean's absorption of human-caused carbon dioxide emissions is also increasing the level of corrosive waters near the ocean's surface where pteropods live.

"We did not expect to see pteropods being affected to this extent in our coastal region for several decades," said William Peterson, Ph.D., an oceanographer at NOAA's Northwest Fisheries Science Center and one of the paper's co-authors. "This study will help us as we compare these results with future observations to analyze how the chemical and physical processes of ocean acidification are affecting marine organisms."

Richard Feely, senior scientist from NOAA's Pacific Marine Environmental Lab and co-author of the research article, said that more research is needed to study how corrosive waters may be affecting other species in the ecosystem. "We do know that organisms like oyster larvae and pteropods are affected by water enriched with CO2. The impacts on other species, such as other shellfish and larval or juvenile fish that have economic significance, are not yet fully understood."

"Acidification of our oceans may impact marine ecosystems in a way that threatens the sustainability of the marine resources we depend on," said Libby Jewett, Director of the NOAA Ocean Acidification Program. "Research on the progression and impacts of ocean acidification is vital to understanding the consequences of our burning of fossil fuels."

The research drew upon a West Coast survey by the NOAA Ocean Acidification Program in August 2011, that was conducted onboard the R/V Wecoma, owned by the National Science Foundation and operated by Oregon State University.