Posted by plantitfilm on Monday, 15 July 2013 in Climate Change 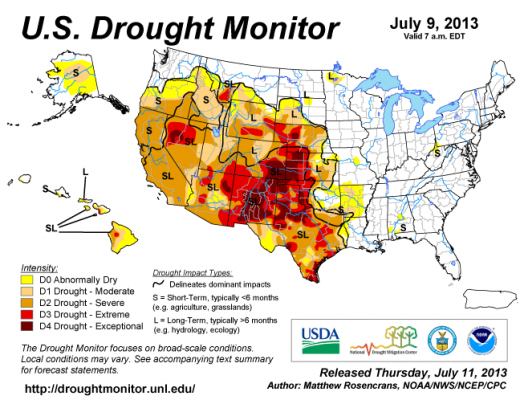 SPICEWOOD, Texas — In this browning patch of land in central Texas, C.J. Teare could be fined for using fresh water to keep her decades-old oak trees alive so she relies on soapy water left over from washing clothes.

"I've never seen it like this before," says Teare, a grandmother who has lived in her modest Lakeside Beach ranch for 20 years. Her community has been under emergency water restrictions since January 2012, when it became the first to run dry during Texas' ongoing three-year drought. It stays afloat with six daily truckloads of water.

Thirty miles southeast near Austin, Pete Clark had to close one restaurant along Lake Travis, and the other has lost 75% of its business since 2011. Water levels are so low that Carlos n' Charlie's, once a popular floating Tex-Mex watering hole, is no longer even lakeside.

An hour upstream along Lake Buchanan, Rusty Brandon is filing for bankruptcy. He says potential customers say "never mind" when he tells them there's no water for boating or fishing at his Hi-Line Lake Resort. Whatever its cause, he says, "I'm literally on the front line of experiencing climate change daily."

These are the faces of drought in the Lone Star State, where water has become such a Texas-size problem that some desperate residents do rain dances while others hope for tropical storms.

USA TODAY traveled to the Austin area, where nightly city patrols issue fines to residents who violate water restrictions, as the fifth stop in a year-long series to explore places where climate change is changing lives.

While drought has several causes, climate scientists say global warming is a long-term contributor that could be exacerbating current conditions, especially in the already-arid Southwest. They say it will likely do more damage in the future. Why? Higher temperatures cause more water to evaporate, and unless there's enough rain to offset it, the ground dries up.

More heat is on the way, too. U.S. temperatures are expected to rise 3 to 10 degrees by 2100, partly because of the heat-trapping greenhouse gases emitted in the burning of fossil fuels, according to a draft copy of the third National Climate Assessment, a federal report compiled by hundreds of government and academic scientists. As a result, the report expects summer droughts to intensify in most U.S. regions as well as enduring water shortages in the Southwest, Southeast and Hawaii.

Drought, which struck as much as two-thirds of the land in the 48 contiguous states last year, still afflicts 44% of that area and 87% of Texas, reports the U.S. Drought Monitor. The National Weather Service predicts it will persist or intensify in much of the western U.S., including the western half of Texas where drought caused billions of dollars in damage in 2011 from crop failures, herd die-offs and wildfires.

"Climate change is likely prolonging the duration and severity of naturally occurring drought in the Southwest," says Martin Hoerling, a research meteorologist at theNational Oceanic and Atmospheric Administration. He says the main cause of U.S. drought today is a lack of rainfall, but by century's end, the key culprit might be higher temperatures.

Texas, prone to drought, is particularly vulnerable. Its supply of water is shrinking while its demand for water is rising amid a boom in population and fossil fuel production. In a process known as hydraulic fracturing or fracking, huge amounts of water are blasted underground to break apart rock and retrieve oil or gas trapped inside.

So conflicts are flaring between frackers, who are giving what landowners call "mailbox money" for the right to tap their wells, and residents whose wells are running dry. Tiffs have arisen even within families, as some take the money and others don't. Much of Texas fracking is done in the northern Barnett Shale near Fort Worth and the southern Eagle Ford Shale.

In the Austin area, where fracking isn't an issue, lawsuits have been filed over water distribution as business owners upstream compete with rice farmers downstream.

"This drought has affected everyone, up and down the basin," says Ryan Rowney of the Lower Colorado River Authority, a quasi-state agency that runs local water systems. Last year and again this spring, the LCRA cut off water to most rice farmers because reservoir levels reached record lows in Lakes Travis and Buchanan — now about 38% full. Rowney says levels are "rivaling those of the 1950s drought — the drought of record," a seven-year dry spell that caused agricultural and other losses estimated at $22 billion in 2011 dollars.

"Things are likely to get worse," says Robert Mace, who directs water science and conservation at the Texas Water Development Board. Statewide, he says reservoir levels are at their lowest since at least 1990. By year's end, 29 Texas communities could follow Spicewood Beach and adjacent Lakeside Beach in running out of water, according to the Texas Commission on Environmental Quality, a state agency.

That's left many wondering what the future holds as temperatures rise.

"I'm not a firm believer that men are a source of climate change," says Brandon, who's laid off all workers at his deserted "lake" resort. Still, whatever its cause, he sees its impact:

The link between climate change and drought is complicated. Drought has multiple causes that include year-to-year climate patterns like La Niña and decadal shifts in ocean temperatures. Climate scientists say it remains a challenge, despite improved computer models, to figure out what portion of drought can be attributed to global warming.

"This is not quite like rocket science," Hoerling says, adding that climate modeling is more "interpretive."

He co-authored a report, released in April, that says global warming played little, if any, role in last year's historic drought in the central Great Plains. He says the main cause was a lack of moisture that usually sweeps up from the Gulf of Mexico.

Other climate scientists, acknowledging the role of these weather patterns and natural variability, say climate change exacerbated the 2012 drought partly by helping to keep the jet stream north.

"All these three factors combine to contribute to the dry conditions in Texas and elsewhere in the Southwest," says Gerald Meehl, senior scientist at the National Center for Atmospheric Research, a federally funded laboratory. Despite year-to-year fluctuations in these areas, he says, "You have this long-term trend toward dryness."

Global warming, by raising temperatures, made the 2011 Texas drought "distinctly more probable" than would have occurred 40 to 50 years ago, according to a study led by David Rupp and Philip Mote of Oregon State University.

Another study co-authored by Hoerling and Texas' state climatologist, Texas A&M professor John Nielsen-Gammon, says this warming made the drought slightly worse. The researchers say it didn't affect precipitation but accounted for about 20%, or one degree, of the five-degree jump in temperature above the summer norm.

What's exacerbating water worries in parts of Texas is water-intensive fracking, which is taking off in some of the state's driest areas.

Half of Texas' oil and gas wells were in "high or extremely high water stress" regions, according to a report in May by Ceres, a Boston-based nonprofit that promotes corporate sustainability. Nationwide, the report says, 47% of these wells are in water-stressed areas.

In Texas, water for fracking jumped 125% in three years and will continue to increase before leveling off in the 2020s, according to a University of Texas-Austin study this year by research scientist Jean-Phillippe Nicot.

Hugh Fitzsimons,a Dimmit County bison rancher, suspects fracking has depleted nearby wells so much that one of his wells is running low. "I've had trouble irrigating," says Fitzsimons, whose herd has dropped from 400 in 2007 to 100.

Bob Reed, who has grown rice in Bay City since 1980, says he has been unable to plant because rice farmers were cut off from municipal water supplies the past two years. "You can't do it without irrigation," he says, adding his land is ideally suited to rice — not other crops.

Mike Burnside, 65, who has grown rice on 1,000 acres in Bay City, says it's risky to buy equipment and switch to row crops such as corn, milo or soybean, because they're dependent on rain.

"I'll continue to farm," he says. "It's a calling. I'll probably die on the farm, until my wheels don't work anymore."

Clark hopes for a storm. In his 26 years of doing business along Lake Travis, nearly 56 feet below capacity, he's seen other droughts — and floods — but never anything this bad.

"Droughts are a slow, painful death," Clark says, noting he might be forced to close Carlos n' Charlie's. Yet he tries to remain optimistic, recalling how the lake once rose 36 feet in 24 hours during a storm.

"It is possible," Clark says. "That's why we stay in business, because technically it (drought) shouldn't last forever."