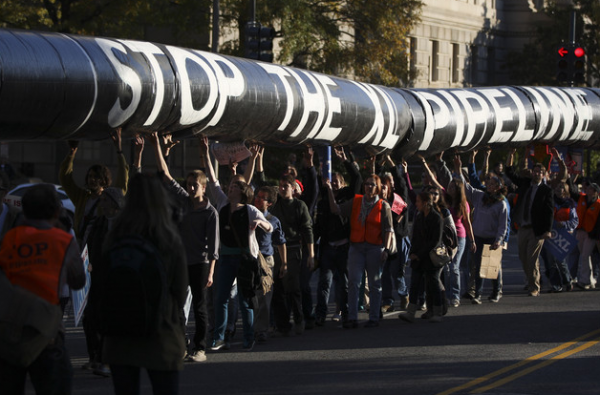 WASHINGTON--(ENEWSPF)--July 23, 2013 – The proposed Keystone XL tar sands pipeline would significantly boost the carbon pollution that drives climate change, failing the test set by President Obama, according to a detailed analysis by the Natural Resources Defense Council.

In just one key way, over its 50-year life, the Keystone XL tar sands pipeline would add up to 1.2 billion metric tons more carbon pollution than if it carried conventional crude. That is more than every car in the United States releases into the air in an entire year.

Furthermore, the overall increase in carbon pollution triggered by Keystone XL would be similar to the emission reductions from one of the most ambitious initiatives now underway: new U.S. heavy truck emission and efficiency rules.

On June 25th, President Obama said the Keystone XL project would not win approval if it exacerbated the problem of carbon pollution, and that its impact on the climate also would be “absolutely critical” to determining whether the controversial project is approved.

The NRDC analysis shows that it would fail this all-important test with specific data on: Tar sands expansion is not likely without the Keystone XL pipeline; the expanded development of tar sands oil it would drive; tar sands transportation alternatives such as other pipelines and rail; the destruction of peatland that naturally pulls carbon out of the air; and total new carbon pollution added to the atmosphere.

“Our analysis clearly demonstrates that the Keystone XL pipeline would dramatically boost the development of dirty tar sands oil, significantly exacerbating the problem of climate pollution,” said Susan Casey-Lefkowitz, director of NRDC’s international program. “Approve it, and our children’s future is jeopardized. Deny it, and we’ll avoid sending over a billion tons of additional carbon pollution into the air. The right choice is obvious: Keystone XL fails the president’s climate test and he should reject it to protect our national interest.”

NRDC released its analysis just after submitting it to the U.S. State Department. The federal department is considering a permit to build the controversial pipeline that’s designed to send tar sands oil from Canada through the heart of America to the Gulf of Mexico, where it could be refined and exported to international markets.

Keystone XL’s climate impact should be considered within the broader context of U.S. policy regarding high-carbon infrastructure. In addition to Keystone XL, the State Department is considering other tar sands pipeline projects that could increase carbon emissions by 16.2 million tons.

Due to limited refining capacity, Keystone XL is a necessary component of expansion of tar sands production – and its associated climate emissions. Because of refinery limits in the U.S. and Canada, Keystone XL is the only viable way to deliver tar sands oil to the Texas Gulf Coast to be refined and sold to overseas markets.

Export pipelines from the tar sands region are expected to reach capacity by 2014, and Keystone is the only major pipeline proposal for transporting bitumen in the near-term.

In the absence of pipelines, rail is not an economically viable alternative for heavy tar sands transport. The State Department was incorrect in its Draft Supplemental Impact Statement by asserting that tar sands development and transportation would happen regardless of whether Keystone XL is approved. Rail is expensive for tar sands crude, which is why it has been largely absent in the current crude-by-rail boom.

Canada is not pursuing climate policy that would effectively counteract significant growth in greenhouse gas emissions, or meet its international climate target.

The NRDC report concludes that the Keystone XL tar sand project would worsen the problem of carbon pollution. Thus, it fails the president’s test, it is not in the national interest, and the permit needed for construction should be denied.

For an executive summary of NRDC’s white paper, click here:http://docs.nrdc.org/energy/files/ene_13072301a.pdf