Posted by plantitfilm on Monday, 26 August 2013 in Animals 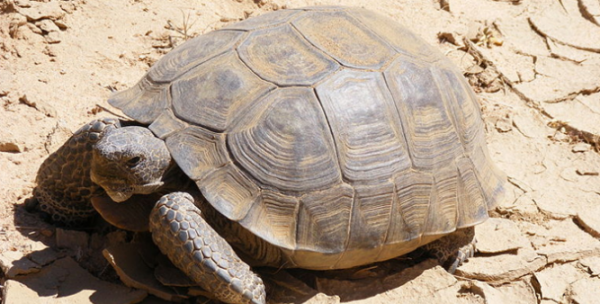 Federal funds for a Nevada-based desert tortoise conservation center are running dry and wildlife officials plan to close the facility and euthanize hundreds of tortoises that were once classified as “endangered” and are currently considered “threatened.”

The desert tortoise can be found in the southwestern United States, but its population has been dwindling. In some areas, the tortoise population has decreased by 90 percent since the 1980s, and in the Mojave desert the population is considered “threatened.” It is illegal to touch, harm or harass these animals, and the Desert Tortoise Conservation Center has tried to increase their population ever since they were added to the endangered species list in 1990.

Still, only 100,000 desert tortoises are estimated to remain in the wild.

The facility usually takes in diseased or injured tortoises and nurtures them back to health, but new arrivals will most likely be put to sleep.

The Bureau of Land Management currently funds the conservation and research center with fees inflicted on those who disturb tortoise habitats. During the housing boom in the early 2000s, the conservation center had plenty of cash, since developers were frequently fined for disturbing such habitats. But since the recession, the BLM has struggled to meet its annual $1 million budget.

Over the past 11 months, the BLM has only accumulated $290,000 in federal mitigation fees that developers are forced to pay.

“With the money going down and more and more tortoises coming in, it never would have added up,”BLM spokeswoman Hillerie Patton told AP.

The desert tortoise is the state reptile of both California and Nevada. Millions of these creatures once roamed the deserts of the American southwest and northern Mexico, but they are now a rare sight.

After news broke of the Desert Tortoise Conservation Center’s plans to euthanize the vulnerable animals, a petition was launched on Change.org, asking the state of Nevada to seek an alternate method to keep the facility open.

“While I understand that budgets are tight and money is scarce, I believe that the funds required could be raised,” states the petition, which was launched by New York resident Seth Webster. “…Please show your support and ask the BLM to cease plants to euthanize and find another way.”

The petition had about 50 signatures out of a goal of 10,000 on Monday afternoon.