Posted by jennystorie on Friday, 30 August 2013 in Earth Violators 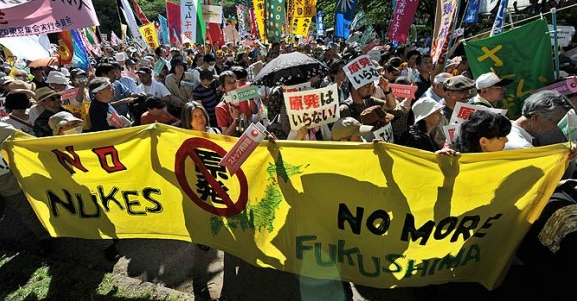 TOKYO — Japan's nuclear regulator on Wednesday upgraded the rating of a leak of radiation-contaminated water from a tank at its tsunami-wrecked nuclear plant to a "serious incident" on an international scale, and it castigated the plant operator for failing to catch the problem earlier.

The Nuclear Regulation Authority's latest criticism of Tokyo Electric Power Co. came a day after the operator of the Fukushima Dai-ichi nuclear plant acknowledged that the 300-ton (300,000-liter, 80,000-gallon) leak probably began nearly a month and a half before it was discovered Aug. 19.

In a meeting with agency officials and experts Tuesday night, TEPCO said radioactivity near the leaky tank and exposure levels among patrolling staff started to increase in early July. There is no sign that anyone tried to find the source of that radioactivity before the leak was discovered.

On Wednesday, regulatory officials said TEPCO has repeatedly ignored their instructions to improve their patrolling procedures to reduce the risk of overlooking leakages. They said TEPCO lacked expertise and also underestimated potential impact of the leak because underground water is shallower around the tank than the company initially told regulators.

"Their instructions, written or verbal, have never been observed," Toyoshi Fuketa, a regulatory commissioner, said at the agency's weekly meeting Wednesday.

TEPCO acknowledged recently that only two workers were assigned to check all 1,000 storage tanks at the plant during their twice-daily, two-hour walk without carrying dosimeters, and their inspection results were not adequately recorded. TEPCO said it will increase patrolling staff to 50 from the current eight.

The nuclear authority originally gave a Level 1 preliminary rating – an "anomaly," to the tank leak. Last week the authority proposed raising that to Level 3 – a "serious incident" – and it made that change after consulting with the International Atomic Energy Agency.

The IAEA's ratings are designed to inform the international community, and changing them does not affect efforts to clean up the leak by the government and TEPCO. The 2011 Fukushima disaster itself was rated the maximum of 7 on the scale, the same as the 1986 Chernobyl accident.