The UN nuclear agency announced on Monday the creation of a new centre in Monaco to help coordinate international efforts to research and combat the serious environmental problem of ocean acidification. 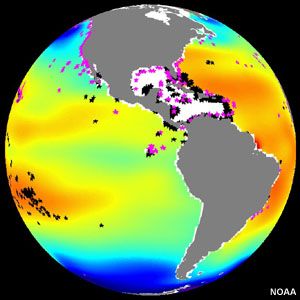 "During the past five years, numerous multinational and national research projects on ocean acidification have emerged and significant research advances have been made," the International Atomic Energy Agency said,

The growing amounts of carbon dioxide released into the atmosphere through human activity are being absorbed in the planet's oceans, increasing their acidity.

According to experts, ocean acidification may render most regions of the ocean inhospitable to coral reefs by 2050 if atmospheric carbon dioxide levels continue to increase, the IAEA said.

This could lead to substantial changes in commercial fish stocks, threatening food security for millions of people as well as the multi-billion-dollar fishing industry, it added.

The new centre, due to be opened this summer, will be overseen by national and international bodies including the UN Intergovernmental Oceanographic Commission and leading scientists and economists in the field.