Posted by voice on Thursday, 12 January 2012 in Oil Spill 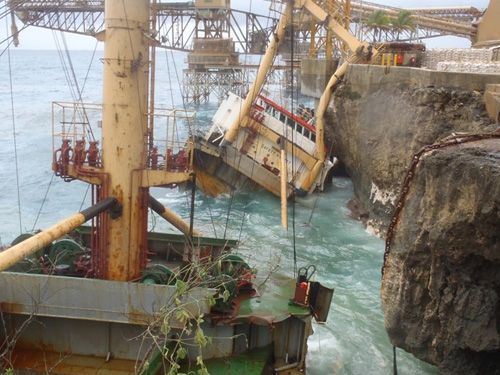 Hundreds of thousands of juvenile land crabs are being threatened by an oil spill on Christmas Island, in the Indian Ocean.

On Sunday, a Panamanian-flagged cargo ship, MV Tycoon, was pushed against the sea wall of the island's Flying Fish cove by a giant swell.

Severe weather conditions have since caused the vessel to break in two (see photo). "On the basis of that catastrophe, we believe most of the fuel has been released," says Mal Larsen, a spokesman at the Australian Maritime Safety Authority. The ship was carrying approximately 140 tonnes of fuel oil, 11,000 litres of lubricant oil, and 260 tonnes of phosphate, which is mined on the island.

The spill is bad news for the island's red crabs (Gecarcoidea natalis). Each December millions of the crabs, which are unique to the island, migrate out of the rainforest to release their eggs into the sea. By January, the hatchlings are ready to return to land.

"They are emerging now," says Nic Dunlop, an environmental scientist at the Conservation Council of Western Australia in West Perth. "There will be hundred of thousands of young crabs coming ashore – and it is the worst possible time for them to contact diesel."

Jean-Paul Hobbs at the University of Western Australia, Crawley, says pollutants such as oil are particularly toxic to eggs and larvae. "It's their most vulnerable stage," he says. If the oil is not removed soon it is "pretty clear" many larvae will die, he says.

Larsen could not confirm how many crab larvae have been affected by the oil spill so far, but poor weather conditions – which are expected to continue for three to five days – are stalling efforts to remove the oil.

Congregations of whale sharks foraging on the crab larvae are also likely to be affected by the incident.