Sometimes, you just can’t make this stuff up. It’s really embarrassing for me to write this, but the legislature of my native North Carolina has made it illegal for public officials to consider current rates of sea level rise as they plan for the future. And, no, I did not get this from The Onion. 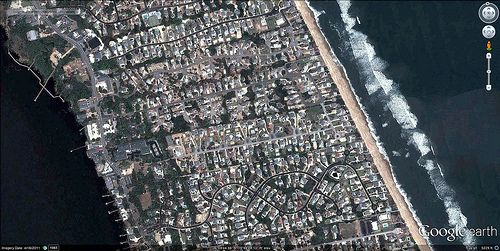 It’s like this: as you can see from the image, coastal North Carolina – especially the Outer Banks north of the protected Cape Hatteras National Seashore – is overdeveloped. Way overdeveloped. And on the Outer Banks there is almost no land more than 20 feet above sea level, and lots of development at lower elevations precariously close to sea level. Those properties may not be worth much for still more development if climate scientists’ latest forecasts of rising sea levels – 1.2-1.3 meters, or about 4 feet, by 2100 – come true. Investors and insurers, in particular, along with state infrastructure planners, might be advised to look for other places to put their dollars.

It’s not just the Outer Banks, of course. There is lots of vulnerable, low-lying coastal land along Albemarle and Pamlico Sounds in between the Outer Banks and the mainland, as well as coastline along the Atlantic Ocean in the southeastern part of the state. Everything you see in dark green on the map below would be under water with even a one-meter rise. 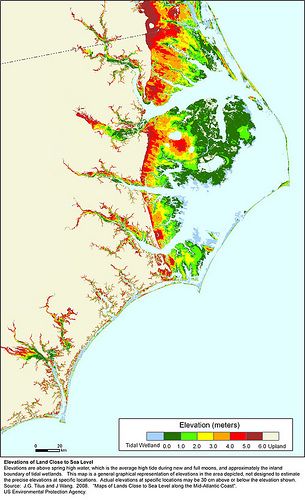