Posted by Joao Fonseca on Tuesday, 19 November 2013 in Fossil Fuels

As Pentagon Invests in Green Fuel, Critics Focus on the Cost 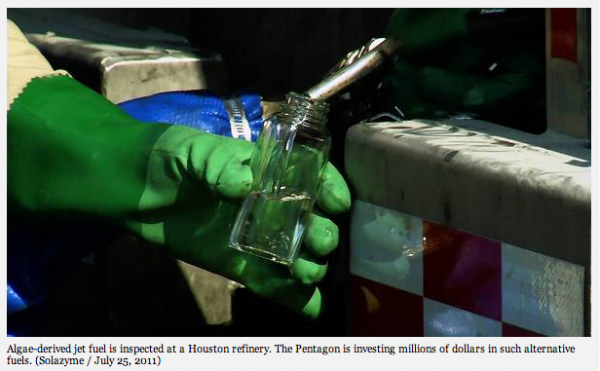 When the U.S. Navy sailed an imposing fleet near Hawaii that was powered in part by algae and used cooking grease, environmentalists weren't the only ones who were thrilled.

Executives at bioenergy startups in the San Francisco Bay Area, Chicago and elsewhere — and the venture capitalists backing them — had reason to cheer. The Obama administration has made the military, the largest consumer of energy in the country, a financial lifeline for cash-strapped alternative fuel innovators.

But the pilot voyage of the Navy's "great green fleet" came with a troubling aspect: price.

FOR THE RECORD:
Green military: An article in the Nov. 18 Section A about alternative fuels used by the military inaccurately referred to an article that Navy Secretary Ray Mabus wrote in Foreign Policy magazine about the history of military procurement. Mabus wrote that the Navy had paid above-market prices during the 19th century to help spur growth of the domestic steel industry, not of the oil industry.


The fleet's green fuel costs $26 a gallon, several times more than conventional diesel and jet fuel. And the costly experiment came just as the military moved into an era of deep budget cuts.

Republicans in Congress have howled over the price tag, and they're not alone. Some independent energy experts doubt the military's projections that spending on pioneering technology will yield sufficient benefits.

Although the prices are high, the cost is a fraction of the more than $20 billion the military spent last year on fuel, backers say.

"We don't want to find ourselves with our backs against the wall in some future crisis where the availability and price of petroleum-based fuels limits all our options and makes them unattractive," said Dennis McGinn, assistant secretary of the Navy for energy, installations and the environment. "This is something we can't not do."

With encouragement from the White House, the military has pursued an Obama administration alternative energy agenda that otherwise has stalled in Congress.

The Pentagon has allocated millions to help incubate a Bay Area firm that extracts oil from algae and another trying to make fuel from switchgrass. A Northern California firm working to turn massive amounts of garbage into liquid fuel and Emerald Biofuels, an Illinois company hoping to do the same with the kinds of grease used in cooking and food processing, are each positioned to win as much as $70 million in grants.

Critics contend the spending will line the pockets of lucky entrepreneurs, not bolster national defense or help the environment.

"This is really a house of cards," said Ike Kiefer, a recently retired Navy captain and faculty member at the U.S. Air Force Air War College, who has spent the last few years studying the fuel purchases.

"When you look at the absolute limits of what is possible, it doesn't work," he said. "This is not a question of waiting for another generation of technology."

Some notable green energy thinkers endorsed Kiefer's findings, which were published this year in Strategic Studies Quarterly, an official Air Force journal. Jesse Ausebel, a scientist involved in global efforts to cut emissions, said in an email that the Kiefer paper was "the best analysis of biofuels that I know."

The Rand Corp. declared in a 2011 report commissioned by the Pentagon that "there is no direct benefit to the Department of Defense or the services from using alternative fuels." Keith Crane, director of the Rand Environment, Energy and Economic Development Program, said in a recent interview that he remained "very skeptical."

Doubters say that growing and processing algae, wood chips and other biomass on the scale the military needs would require an irrationally large amount of energy, land and other resources. Plans to convert massive amounts of used cooking oil and household trash to liquid fuel, meanwhile, have long been undermined by technological and environmental problems.

Researchers have tried for years to produce economical fuels from algae, with little success. This year, Exxon Mobil acknowledged that a $600-million plan it began in 2009 to hit the marketplace with such a fuel within a decade had failed. It is starting over.