Posted by Wolf on Saturday, 16 November 2013 in Clean Water

Oil and Gas Drillers Are Running Out of Water 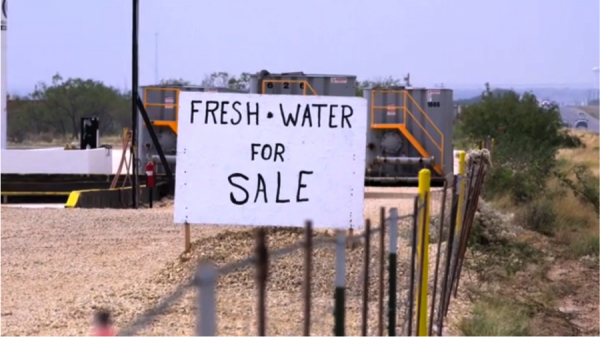 When the rain stopped falling in Texas, the prairie grass yellowed, the soil cracked and oil drillers were confronted with a crisis. After years of easy access to cheap, plentiful water, the land they prized for its vast petroleum wealth was starting to dry up.

At first, the drought that took hold a few years ago seemed to threaten the economic boom that arose from hydraulic fracturing, a drilling method that uses huge amounts of high-pressure, chemical-laced water to free oil and natural gas trapped deep in underground rocks. But drillers have found a way to get by with much less water: They recycle it using systems that not long ago they may have eyed with suspicion.

"This was a dramatic change to the practices that the industry used for many, many years," said Paul Schlosberg, co-founder and chief financial officer of Water Rescue Services, the company that runs recycling services for Fasken Oil and Ranch in West Texas, which is now 90 percent toward its goal of not using any freshwater for fracturing, or "fracking," as it is commonly known.

Before the drought, "water was prevalent, it was cheap and it was taken for granted," he added.

Just a few years ago, many drillers suspected water recyclers were trying to sell an unproven idea designed to drain money from multimillion dollar businesses. Now the system is helping drillers use less freshwater and dispose of less wastewater. Recycling is rapidly becoming a popular and economic solution for a burgeoning industry.

The change is happening so swiftly that regulators are racing to keep up and in some cases taking steps to make it easier for drillers to recycle.

Fracking operations require millions of gallons of relatively clean water. Each time a well is drilled, about 20 percent of the water eventually remerges, but it is jam-packed with contaminants from drilling chemicals and heavy metals picked up when the water hits oil. Until recently, that water was dumped as waste, often into injection wells deep underground.

Many companies, each using slightly different technology and methods, are offering ways of reusing that water. Some, like Schlosberg's Water Rescue Services, statically charge the water to allow particles of waste to separate and fall to the bottom. Those solids are taken to a landfill, leaving more than 95 percent of the water clean enough to be reused for fracking.

Other operators, such as Salt Lake City-based Pure Stream, offer two technologies—one that cleans water so it can be reused in the oil patch and another more expensive system that renders it clean enough to be dumped into rivers and lakes or used in agriculture.

Todd Ennenga, Pure Stream's vice president of business development, said interest in the technology has doubled in the past year alone.

Some others tout methods that leave behind no solid waste at all, eliminating the need to transport anything to a landfill. A few companies insist they can frack without any water.

"It's really taken off," Ennenga said of recycling. Two years ago, he said, most operators were still vetting the different systems. These days, they have a plan and are saying, "We need to do this right now."

In Texas, the fracking boom began around 2009, just as the state fell into years of drought. Especially hard-hit were South and West Texas, where rock formations have proven to be rich sources of oil and gas. Residents who were told to cut back on lawn watering and car washing grumbled about drillers hogging water supplies.

Farther east, states such as Pennsylvania, Ohio and West Virginia, face different issues. There, water is relatively plentiful but disposal of wastewater has been bureaucratically difficult and expensive, while the sites that can collect it are scarce.

States are scrambling to draft regulations for the new recycling systems.

In Texas, requests for recycling permits rose from fewer than two a year in 2011 to 30 approved applications in fiscal year 2012. So the Texas Railroad Commission, the agency that oversees oil and gas operations, revamped the rules in March, eliminating the need for drillers to get a permit if they recycle on their own lease or on a third-party's property.

Commission spokeswoman Ramona Nye said in an email that the new rules are designed to "help operators enhance their water conservation efforts" and encourage recycling.

In Ohio, disposing of drilling wastewater has hit some obstacles. Activity at a deep injection well near Youngstown was tied to one in a series of earthquakes, and a former officer of the firm that ran the operation has been indicted in connection with a separate dumping incident that allegedly violated the Clean Water Act. That led to a temporary moratorium on disposal sites in that region, stricter rules and an EPA review.

Pennsylvania, meanwhile, has few dumping sites, and operators once paid large sums to haul wastewater to Ohio. Recycling has now become cheaper, and transports to Ohio have dwindled.

Back in Texas, Fasken Oil and Ranch believes it solved many of its early problems with the containment pools, tanks, pipelines and trailers. Within six months, the company expects to reach its goal of using no freshwater in its fracking operations—a feat made possible by combining recycled water with briny water drawn from an aquifer and treated.