Posted by greenmonkey on Sunday, 01 December 2013 in Forestry 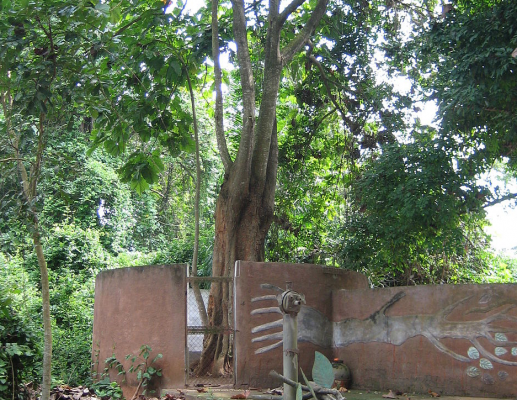 Iroko trees are native to the west coast of Africa. Sometimes called Nigerian teak, their wood is tough, dense, and very durable. Their hardwood is so sought after that the trees are often poached and are now endangered in many regions of Africa. But a new scientific discovery may aid in reforestation efforts.

Oliver de Schutter, the United Nations special rapporteur on the right to food, has found that Iroko trees can serve as long-term carbon sinks and can potentially play a role in the fight against climate change. Iroko trees and microbes can turn carbon dioxide emissions into soil-enriching limestone, a process that packs a one-two punch: carbon dioxide is removed from the atmosphere, and dry, acidic soil is made more fertile for agriculture.

When the West African Iroko tree is grown in dry, acidic soil and treated with microbes, it produces a very specific mineral. When the microbes are introduced, the tree combines the calcium already in the soil and carbon dioxide from the atmosphere to produce a mineral limestone. This mineral limestone is then stored in the soil around the Iroko tree’s roots.

Normally, biomass (such as trees) does not store carbon dioxide—the gas is used in the process of decomposition. But carbon in the form of limestone has a staying time that may span a million years. This makes a great case, according to Swiss researchers, for the preservation and sustainable management of tropical forests to fight against the greenhouse effect.

Iroko trees are just one of many species from Africa and the Amazon that can turn carbon in the atmosphere into mineral limestone. In this study, scientists looked at several microbe-tree combinations to identify which was best for locking up carbon dioxide as limestone, and the Iroko-microbe pathway showed the greatest results.

“By taking advantage of this natural limestone-producing process, we have a low-tech, safe, readily employed and easily maintained way to lock carbon out of the atmosphere, while enriching farming conditions in tropical countries,” said Dr Bryne Ngwenya of the University of Edinburgh’s School of GeoSciences.

There is also great potential for reforestation projects to help reduce carbon dioxide emissions in the developing world. Reforestation schemes that involve the use of microbes and Iroko trees together could improve the carbon sequestration balance of carbon trading initiatives, improve soil fertility, and even promote the implementation of agroforestry projects to benefit rural communities.