Posted by EarthDude on Tuesday, 21 January 2014 in Transportation 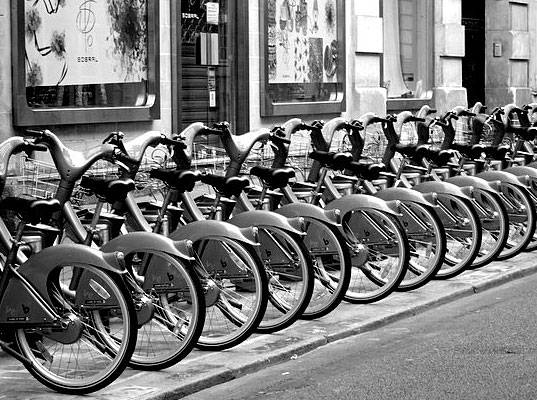 finds city could support system of over 1,000 rental bikes

The city of Cleveland's plan to add another 70 miles of bikeways  topped the news out of Bike Cleveland's annual meeting on Sunday.

But the city and the advocacy group for cyclists also are exploring another project that would add a different type of bike-friendliness to Northeast Ohio -- a bike-share network that would let riders borrow and return bicycles to self-serve stations scattered across Cleveland.

The city could support a system of 770 to 1,400 rental bikes based at between 77 and 140 stations in five neighborhoods, according to findings of an initial study of the idea conducted for Cleveland's Office of Sustainability.

The proposal calls for a dual-core setup with hubs in downtown Cleveland and University Circle, followed by an expansion of bike-sharing stations into the Midtown, Ohio City and Tremont neighborhoods. These locations were expected to offer the highest potential demand for bike sharing.

"This is preliminary research that used demographic, economic and density data, along with community feedback, to come to this conclusion," said the chief of the sustainability office, Jenita McGowan.

McGowan said it will take a more thorough review to determine how a bike-sharing system would operate, who would run it and how much it would cost.

The Bike Share Task Force -- made up of McGowan's office and a dozen agencies and neighborhood groups, including the Downtown Cleveland Alliance and University Circle Inc. -- is in the midst of more detailed planning that examine those factors.

"Bike sharing is a great addition to a city's transportation options and a great way to make riding a bicycle accessible for everyone," said Jacob VanSickle, head of Bike Cleveland.

If Cleveland embraces a bike-share program, it will join a growing number of urban centers in the United States, Europe and Asia that have adopted the hybrid of biking and public transportation.

Bike sharing lets users check out a heavy-duty, durable bike for a fee, say $6, or by using an annual membership. They ride from one automated checkout station to another station that is nearest their destination, locking the bike there for the next person to use.

The system is designed for short trips of 30 minutes or less, to keep bikes in circulation – unlike traditional rentals where you might keep the bicycle for a half-day, a day or longer. Besides being a form of public transit itself, bike sharing also links into existing transit. In some cities with bike sharing, up to 50 percent of trips are made to or from bus, train and subway stations.

Columbus launched CoGo Bike Share last July with a network of 300 bicycles and 30 stations throughout downtown. Citi Bike opened in New York City in May with 6,000 bicycles and 330 docking stations in Manhattan and Brooklyn, making it the largest bike-sharing program in the country.