Posted by mox on Friday, 15 March 2013 in Transportation 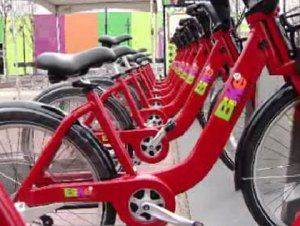 PITTSBURGH (KDKA) — Narrow streets and dense traffic have not deterred increasing numbers of local residents from pedaling to work, or riding their bikes just for fun.

With 75 miles of bike lanes and riverfront trails, Pittsburgh is recognized by the American Community Survey as the 16th highest bicycle commuting city in the nation.

“And we also recently were named one of the top thirty bike friendly cities, by Bicycling Magazine,” Mayor Luke Ravenstahl said at a Bakery Square news conference.

“For visitors and commuters alike, about 500 bikes,” the mayor continued. “At about 50 solar powered docking stations all throughout the city of Pittsburgh. So, for example, if you are working here or visiting here and you want to grab one of these bikes that are behind me and you want to go to one of our other neighborhoods, you can do that. Drive down, have lunch, and stay there if you’d like, or of course drive back.”

The federal government will provide $1.6 million of the estimated $4 million cost.

Foundations and corporate sponsors will be tapped for the balance.

Scott Bricker of Bike Pittsburgh says Bike Share fees range from $7 a day, to $75.00 for a one-year membership...http://pittsburgh.cbslocal.com/2013/03/11/bike-share-pittsburgh-to-offer-bike-rentals-throughout-city/