Posted by tvernile on Tuesday, 06 May 2014 in Transportation

How Bikes Can Save the World 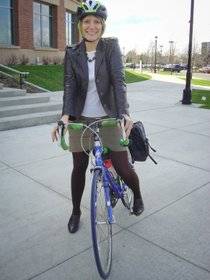 In September 2010 I participated in the first-ever Ignite Spokane (“Enlighten us–but make it quick”), which had the theme “Ideas that Will Save the World.” For those not familiar with the format, you have 5 minutes and can show 20 slides that must advance automatically. No losing your place!

And yes, I biked to the event in the dress and heels I’m wearing in the video.

So you’re expecting the talk with the data and the graphs and the guilt and you want that? See me afterwards.

I’m going to take a different direction on this inspired by Portland blogger Dana Putnam.

Why I Bike: I Am Cheap

First of all, show of hands—how many of you know what gas costs?

I have no idea. I bike because I am cheap. I don’t pay for parking, I don’t worry about insurance. My daughter who’s here tonight had a blow-out on her tire the other day at a stoplight. One hundred and ten bucks. Except those things have four of them and you have to replace them all. I don’t like that part.

How many people would like a raise of over $7,000 a year? Okay, don’t talk to your boss, that’s how much it costs you to run your car. That’s according to AAA and that’s when gas cost about $2.30 a gallon.

I understand it’s more now? I’m not sure, of course.  [Added info: Found a different AAA source with more current data and the cost of operating a vehicle is actually over $9,500 a year.]

I also bike because I am lazy. How many of you had to walk to the parking lot to get your car and then drive here, find a parking spot, walk to the building…. Do you hear all that walking?

I pretty much bike point to point. I am so lazy that sometimes I actually take my bike inside. This redefines indoor parking, I believe. My ride to work is also mostly downhill so I coast.

It’s a little counterintuitive but you can bike if you’re lazy.

Why I Bike:  I Am Impatient

There are many reasons—my mom might call these character flaws, I think—to bike.

I bike because I’m impatient. I always hated waiting at stoplights. There really isn’t time to finish reading the article before the light changes for one thing; you can’t do your nails. But when I’m on my bike and I get to the stoplight it’s really just a chance to catch my breath.

So I’ve got a new attitude about stoplights: They’re a good thing. I bet you don’t share that.

Another thing for you—even if you’re never going to get out of your car, if all of us on our bikes and all the people on the bus do get back in our cars, look what we do to the street. We’re in front of you now at the stoplight. So if you’re impatient you want us to keep riding (or riding the bus).

I get off my bike and I walk a block, get back in the lane and keep going. I am continuing to move towards my destination while you’re stuck at the light. So if you’re impatient biking is great for you.

Why I Bike:  I Am a Control Freak

I’m also a little bit of a control freak although I thought of titling this “mechanically inept.” And for the men in the room you don’t have to fess up. But when I take my car to the shop and they tell me a lot of things I don’t understand and I have to pay them a lot of money—remember, I’m cheap and I’m impatient—I don’t like that part.

But I can actually fix my own flat on the bike. The technology has not changed that much since the Wright Brothers. I get to feel like I’m in control at this point. It’s a great feeling.

These are other reasons to ride. I’m not saying this is about you, it’s about me—

When I’m pedaling and I feel the wind and I’m making the wind myself because I’m going so fast? Awesome. I’m not going that fast—it’s like 17 miles an hour and you’re going to pass me—but I feel great about it.

Additional Reasons to Ride a Bike:  Desperate (but Successful!) Attempt to Appear Cool/Hip/Trend-Setting

If you think about what’s cool right now it is not you in your SUV on the way to Costco to pick up a gallon of ranch dressing and five pounds of Tater Tots. You’re not going to be on the tourism brochure cover or the magazine cover.

You know what picture is going to be on the tourism brochure cover, don’t you? This is a total set-up. You know what it takes to be cool.

Additional Reasons to Ride a Bike: Excuse to Shop

There are other sorts of character issues. This is an excuse to shop for men as well as women. If you like buying something and then bragging to your friends about how yours is better than theirs biking is totally for you. There’s more than one rider here tonight so I know you know what I’m talking about. Technical fabrics, special food—it’s basically sugar in a pouch but it’s still special food.

Additional Reasons to Ride a Bike: Huge Rush that Comes from Saving the World

You knew I was going to do a little bit of this piece. If you like knowing what’s good for other people and telling them about it, biking is totally your thing.

When people are talking about the problems of the world—it’s air pollution, it’s peak oil, it’s urban sprawl, it’s diabetes and obesity—if you ride a bike you’re not responsible for any of that! How cool is that?

We do have a lot of problems in the world. I do think that biking is the only thing that solves a lot of these problems all at once. You do get to be healthier and save money and all of that. But also, it’s so simple a child can do it and it’s fun.

Remember when you learned to ride a bike and you had that sense of freedom and “I don’t have to wait for Mom or Dad to get in the car”–which was the limitation in your life at that point—you could ride your bike.

If you have any of these character flaws you don’t have to admit it out loud. Or maybe it’s psychological issues and therapy costs a lot. You could take a little bit of that money and you could ride a bike.

This post originally appeared on my personal blog, BiketoWork Barb.

*With lots of apologies to people who really struggle with their weight, that image still vividly demonstrates the challenges we face as a society with the growing epidemic of obesity, heart disease, and Type 2 diabetes, fostered and enabled by a society designed to move people using car power, not people power. If that person got out of that car and walked or biked just a few blocks every day, it would make a difference.