Posted by bchristo on Saturday, 15 March 2014 in Climate Change 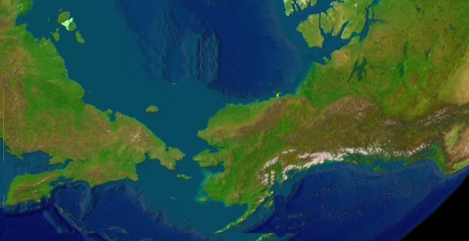 The climate 25,000 years ago was cold, very cold. It was the height of the last ice age, and survival required desperate measures -- especially from those in Eurasia, where food and wood fuel ran low. Some chose to migrate, but distances and directions among groups varied.

One faction ended up on the now-submerged Bering land bridge, a place where they would live in isolation for 10,000 years. They were the first Native Americans, according to a recent column in the journal Science.

Using genetic and paleoecological evidence, University of Utah anthropological geneticist Dennis O'Rourke, University of Colorado archaeologist John Hoffecker and University of London paleoecologist Scott Elias were able to bolster a long-standing theory known as the "Beringian Standstill." The hypothesis took hold in 2007, when a team from the University of Tartu in Estonia identified a set of mutations in a large sample of Native American mitochondrial DNA.

While it had long been known that the group originated from Asia, the variation in their genetic blueprint indicated they must have been isolated from their ancestors for an extended period of time before spreading throughout the Americas. The researchers identified the land mass connecting Asia with North America, the Bering land bridge, as the most likely location. But no one could explain how or why -- until now.

A 'good' place to live

About 25,000 years ago, the Earth entered what is known as the Last Glacial Maximum (LGM), a period of climate change that caused temperatures to drop and glacial masses to expand, O'Rourke said. It also drastically diminished sea levels, which, in turn, allowed the Bering land bridge to rise out of the ocean.

"People may well have simply been expanding throughout the region, and some would have found themselves on the forefront of that movement and would have been in central Beringia, on the land bridge," he said.

The reason they were able to stay there, isolated, for 10,000 years had to do with a bit of luck, a lack of options and an increasingly frigid climate.

"They became isolated," O'Rourke said. "There wasn't any way, without traversing long distances of terrain that were much less hospitable than where they already were, for them to remain in contact with people that were moving further and further away from them as the climate deteriorated."

While most of the region endured dry, freezing weather, pockets of "refugia," or vegetated areas not affected by climate change, remained scattered along the Bering land bridge throughout the LGM period. These unaffected areas provided the Native American founder population with moist, mild temperatures as well as adequate amounts of shrubs, trees and animals.

"The refugia were good places to live," he added. "Good foraging, good hunting and wood availability."

But their delayed entrance into the Americas was not by their own will. They were blocked during the LGM due to the coalescence of ice sheets from the northern Rockies (the Cordilleran Ice Sheet) and north-central Canada (the Laurentide Ice Sheet), which cut off access to both the coast and interior of northwest North America, Hoffecker said.

Once the LGM came to a close, however, the climate began to warm, the sea level rose and ice masses started melting away, allowing the Native American founder population to enter into North America nearly 15,000 years ago, according to the genetic record.