Posted by tvernile on Friday, 04 April 2014 in Climate Change

IPCC Warning on Climate Risk: Worst is Yet to Come 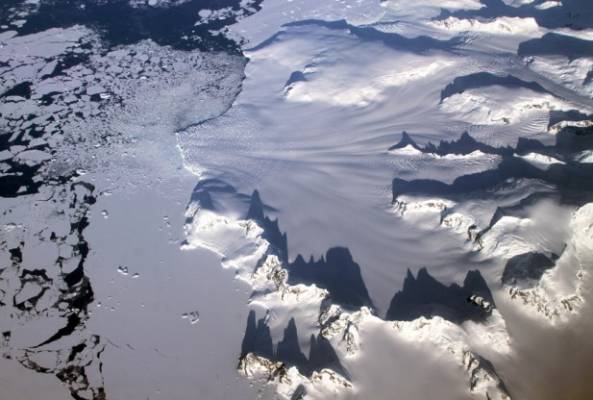 The 44-page Summary For Policymakersdefines the words climate change as follows:

Note that the Framework Convention on Climate Change (UNFCCC), in its Article 1, defines climate change as: ‘a change of climate which is attributed directly or indirectly to human activity that alters the composition of the global atmosphere and which is in addition to natural climate variability observed over comparable time periods.’ The UNFCCC thus makes a distinction between climate change attributable to human activities altering the atmospheric composition, and climate variability attributable to natural causes.

Correspondent Gillis wrote, “In particular, the report emphasized that the world’s food supply is at a considerable risk—a threat that could have serious consequences for the poorest nations.” He also wrote, “Studies have found that parts of the Mediterranean region are drying out because of climate change, and some experts believe that droughts there have contributed to political destabilization in the Middle East and North Africa.”

Can global warming due to increased atmospheric carbon dioxide be a serious threat to the food supply? Carbon dioxide is an airborne fertilizer that increases leaf growth and root sizes that makes crops more tolerant to drought. Food growth since mid-20th century has increased drastically due to population growth from 2.5 billion to 7 billion. It may be the increase in carbon dioxide from 310 ppm to today’s 400 ppm is the reason we are able to feed 7 billion.

The article said there is a decrease in food supply due to climate change. This may be true due to foolish efforts to make biofuels from food fuels — corn and soybeans. In the U. S. alone, 5 billion bushels of corn have been used annually for several years to make ethanol from corn. Over one billion bushels of soy beans have been used to make biodiesel. The U. S. waste of food crops for biofuels could feed hundreds of millions. It is estimated world-wide crop use for biofuels could feed 500 million. lThus foolish efforts to mitigate climate change are costing the public dearly as well as other efforts to replace coal, oil, and natural gas with renewable energy sources such as solar and wind. All this due to attempts at mitigating a non-existent problem of global warming caused by fossil fuel’s carbon dioxide emissions.

Food diverted to making biofuels caused substantial price increases. The overthrow of the Egyptian and other North African governments in early 2011 called the Arab Spring is blamed on the high cost of food in those countries leading to political unrest among the poor without hope.

Mr. Gillis also wrote, “The report also cited the possibility of violent conflict over land, water, or other resources, to which climate change might contribute indirectly ‘by exacerbating well-established drivers of these conflicts such as poverty and economic shocks.’”

Past history shows the earth progressed for thousands of years through cycles of warming and cooling of approximate 500-year duration. The present cycle is called the Current Warming Period which started in 1850. This cycle was preceded by the Little Ice Age from 1300 to 1850. Historians note the Little Ice Age was a period of much misery. War was conducted over land and resources with names 100 Years War, 30 Years War, Napoleonic Wars —  just to name a few. Human health suffered through events like the Bubonic Plaguethat wiped out one-quarter to one-half the population of Europe. Atmospheric carbon dioxide levels remained the same from 1000 AD until about 1900. If climate change was a cause for these events, it had to be natural causes.

Another citation by Mr. Gillis, “The oceans are rising at a pace that threatens coastal communities and are becoming more acidic as they absorb some of the carbon dioxide given off by cars and power plants….”

The National Oceanic and Atmospheric Administration (NOAA) displays a website that show tidal gauge measurements covering over 150 years for 128 U. S. locations and another 112 locations covering the rest of the world. Examining the data shows sea level rises range from 1 to 3 mm per year at most locations or 4 inches to 12 inches per century. Examination of sea level rise the past 20 years, when the greatest increase in atmospheric carbon dioxide has taken place, show the rate of rise is decreasing compared to the first half of the 20th century. Residents of Miami Beach have no greater fear of losing their property the next fifty years as those who built the homes in the early 20th century.

Lord Matt Ridley wrote for The Spectator: “We have a new climate change consensus –and its good news everyone.” He noticed that in many locations in the IPCCC reports were remarks about adapting to threats of climate change which are less expensive and disruptive than attempts at mitigation by replacing fossil fuels with non-carbon dioxide emitting energy sources or other techniques.

Adapting can be as simple as using hurricane anchors in home construction in areas threatened by hurricanes or tornados. Mitigation is the proposed abandoning the world’s abundant sources of coal, oil, and natural gas that are relatively inexpensive and spread throughout the planet. Alternative energy sources are more expensive, less reliable, less mobile, and require great land areas that make them impossible to scale up to the demands of a prosperous planet. Abandoning fossil fuels leave no hope for developing nations to rise above poverty and insures great sacrifices in life’s pleasures for developed nations.

Justin Gillis most likely based his New York Times article on press releases about the Yokohama meeting to decide the wording for the Summary for Policymakers, portions of the Summary for Policymakers, and interviews with those promoting a United Nations-led movement to regulate fossil fuel use. This would produce an article describing a scary future and demands for immediate actions to stop carbon dioxide emissions from fossil fuel combustion.

A more common sense examination of the actual Report may lead to the conclusions of Matt Ridley that adaptation is the route for preparing for the most certain climate change that will occur naturally in spite of futile wishes for some to control the uncontrollable. Perhaps the wording for Justin Gillis article could be written “U. N. Panel Decides Adaption Policy For Climate Change and Abolish the UNIPCC.”