Posted by greenmonkey on Tuesday, 08 April 2014 in Food 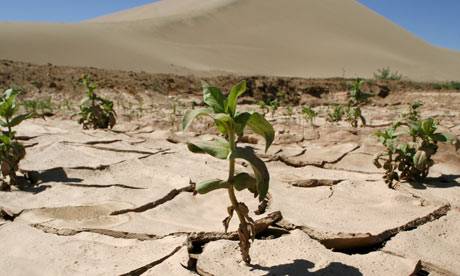 The nutritional quality of food crops may be at risk if climate change intensifies, according to a recent study.

In a wheat field test, scientists found that elevated carbon dioxide may inhibit plants' assimilation of nitrate into proteins. The findings were published online in the journal Nature Climate Change on April 6.

"Food quality is declining under the rising levels of atmospheric carbon dioxide that we are experiencing," said lead author Arnold Bloom, a professor in the Department of Plant Sciences in University of California-Davis, in a statement.

The first study that may prove what many laboratory studies already demonstrated, elevated levels of carbon dioxide in the atmosphere inhibited nitrate assimilation in the leaves of grain and non-legume plants. The assimilation, or processing, of nitrogen plays a key role in the plants' growth and productivity; it's also important for humans, since these plants use nitrogen to produce proteins that are vital for human nutrition. Wheat provides nearly one-fourth of all protein in the global human diet.

The research team, which also included Martin Burger of UC Davis and Bruce A. Kimball and Paul J. Pinter of the U.S. Department of Agriculture, noticed that protein production in the field-grown wheat had been inhibited.

As a result, he estimated that "the overall amount of protein available for human consumption may drop by about 3 percent as atmospheric carbon dioxide reaches the levels anticipated to occur during the next few decades," Bloom said in a statement.

Bloom noted that other studies have shown a 8 percent average decline of protein concentrations in potatoes and grains such as wheat, rice and barley when carbon dioxide is elevated.

The findings come just days after a similar report by the U.N.'s Intergovernmental Panel on Climate Change (IPCC) report, issued March 31. The IPCC said effects of man-made global warming will reduce food production, and it warned that even as improved agricultural techniques have increased crop production by 10 percent per decade, climate change is likely to reduce yields by 1 percent a decade.

"As we go forward in time, we're going to see first in the poorer countries... decreases in some of the main crops like wheat or corn that feed their populations. Eventually they get into trouble and they don't have enough food to feed their people," Dr. Michael Oppenheimer, lead author of the IPCC report, told CBS News.

Food prices are also likely to go up somewhere in a wide range of 3 percent to 84 percent by 2050 just because of climate change, the report said.

Heavy nitrogen fertilization may combat the decrease in food quality, but it would have multiple negative consequences, including higher costs, more nitrate leaching into groundwater and and increased emissions of the greenhouse gas nitrous oxide, according to Bloom.