Posted by tvernile on Tuesday, 15 April 2014 in Energy Efficiency 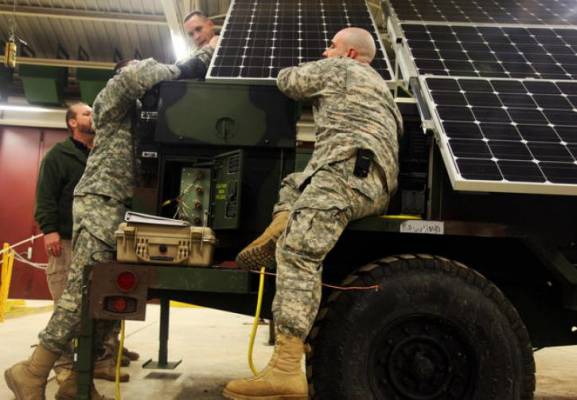 Energy is a massive part of the U.S. military budget — the annual bill is more than $4 billion  — and the Department of Defense (DoD) has vowed to take steps to reduce that bill, not just to save taxpayer money but also for the sake of more reliable operations.

Indeed, by 2025, the agency expects to source at least 25 percent of its energy from renewable sources.

While it still has a long way to go before it can declare victory against that objective, the military won some important early battles in both energy efficiency and its use of renewable energy between 2010 and 2012, reports The Pew Charitable Trusts.

The number of energy savings and efficiency projects more than doubled during that time period, from 630 to 1,339. At the same time, the number of renewable energy projects embraced by the U.S. military branches increased from 454 to 700, reports Pew in its report Power Surge.

"Energy efficiency measures are improving the working conditions for our troops by providing improved lighting and more effective heating and cooling technologies," writes retired Sen. John Warner, former secretary of the U.S. Navy, in his introductory letter to the report. "Twenty-first century on-site solar, wind and geothermal technologies and microgrids are helping to ensure that those lights and temperature controls never run out of electricity on our bases."

Navigant Rearch, which helped Pew pull together the data behind the report, estimates that as of mid-2013, there was 384 megawatts in installed renewable energy capacity on DoD installations. By the end of 2018, there could be up to five times that amount, or 2.1 gigawatts. Another data point of interest, pulled from government disclosures: In fiscal year 2012 (FY 2012), 4 percent of the DoD's facility electricity consumption came from renewable sources. Each military branch has committed to deploying 1 gigawatt of renewable energy by 2025.

The report also details dramatic improvements in facility energy intensity and efficiency. In FY 2012, energy intensity dropped by 4 percent. Since 2003, the overall reduction has been 17.7 percent. For perspective, a Congressional mandate cals for 3 percent in annual energy-intensity reductions.

The economic cost of outages

Katherine Hammack, assistant secretary for the Army, who is responsible for installations, energy and environment, said the military's ability to live up to its mission depends on "unfettered access" to energy.

But both climate factors and grid reliability challenges are calling that access into question: During 2012, 87 power outages on military bases were more than eight hours in duration, notes the Pew analysis. The cost of those blackouts is estimated at $7 million.

Among the military branches, the Army is the biggest energy consumer of power, to the tune of $1.3 billion for FY 2013, said Hammack during a briefing to discuss Pew's report. It manages 1 billion square feet of building space. The Army's strategy is to focus first on opportunities for reduction, next on efficiency and potential co-generation opportunities, and finally on on-site power investments. "The focus is not on renewable energy as a starting point, but as an ending point," she said.

The Obama administration's mandate for federal agencies to use energy savings performance contracts and other private-sector financing options to make these investments has been instrumental in much of the progress made over the past two years. The Army alone is managing third-party contracts worth about $500 million, and is on pace to negotiate even more of them.

Another development that has helped expand the potential for the private sector to become involved in the military's energy transformation is agencies' ability to use power purchase agreements (PPAs) that are more than 10 years long, noted Scott Provinse, director of government relations for developer SunEdison. Up to 80 percent of future DoD renewable energy projects will be financed in this way, relying on private developers to finance, build and maintain the infrastructure, as well as to sell the power generated to the military at negotiated rates over the contract, according to the Pew report.

An example of how PPAs could help is the 16 megawatt solar array at the Davis Monthan Air Force Base in Tucson, Ariz. The project — described as the DoD's largest solar installation and also the largest distributed generation project — will reduce the base utility bill by an estimated $500,000 annually. There are also plans for a 20 megawatt solar farm in Fort Bliss, Texas, slated to come online in 2015.

One ongoing challenge to the military's energy security mission is the difficulty that agencies and individual bases have calculating economic losses tied to downtime. "We are struggling to value energy security," Hammack said.

Referring to her previous role in the private sector, Hammack noted that many businesses put a pricetag on outages. For example, the cost of downtime for an American Express facility is $1 million per minute in lost revenue. So far, no one has figured out the money lost when a laboratory must shut down research or a base must postpone training operations because of power problems or other scenarios, she said.