Birth of a Large Iceberg in Pine Island Bay, Antarctica 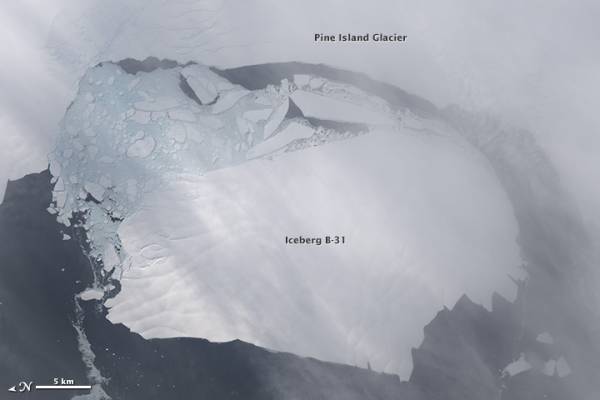 A large tabular iceberg (42 kilometers x 17 kilometers) broke off Pine Island Glacier, West Antarctica (75ºS latitude, 102ºW longitude) sometime between November 4 and 12, 2001. Images of the glacier were acquired by the Multi-angle Imaging SpectroRadiometer (MISR) instrument aboard NASA's Terra spacecraft. This event was preceded by the formation of a large crack across the glacier in mid 2000. Data gathered by other imaging instruments revealed the crack to be propagating through the shelf ice at a rate averaging 15 meters per day, accompanied by a slight rotation of about one percent per year at the seaward margin of the rift.

The image set shows three views of Pine Island Glacier acquired by MISR's vertical-viewing (nadir) camera. The first was captured in late 2000, early in the development of the crack. The second and third views were acquired in November 2001, just before and just after the new iceberg broke off. The existence of the crack took the glaciological community by surprise, and the rapid rate at which the crack propagated was also not anticipated. Glaciologists predicted that the rift would reach the other side of the glacier sometime in 2002. However, the iceberg detached much sooner than anticipated, and the last 10-kilometer segment that was still attached to the ice shelf snapped off in a matter of days.

The animated sequence consists of 11 snapshots acquired by MISR's nadir camera between September 16, 2000 and November 12, 2001. Due to frequent cloud cover, the time interval between successive frames is not uniform. The flow of the glacier, widening of the rift, and subsequent break-off of the iceberg are evident. A "jump" in the position of the rift near the middle of the sequence is due to a gap in image acquisition during Antarctic winter, when the glacier was in continuous darkness.

Pine Island Glacier is the largest discharger of ice in Antarctica and the continent's fastest moving glacier. This area of the West Antarctic Ice Sheet is also believed to be the most susceptible to collapse. The evolution of this glacier is therefore of great interest to the scientific community. "The climatic significance of this calving event is not yet clear, but is taking place in an area of Antarctica which is experiencing rapid changes," said glaciologist Eric Rignot of the Jet Propulsion Laboratory. Rignot points out that the grounding line of Pine Island Glacier is retreating, the glacier is thinning rapidly, and its ice flow is accelerating. Additionally, the sea ice cover in front of the glacier has been decreasing steadily for several decades. The newly hatched berg represents nearly seven years of ice outflow from Pine Island Glacier released to the ocean in a single event. Although this has no effect on sea level (the ice is already afloat), it is an exceptional event for this glacier, and provides additional evidence that this area is undergoing rapid change.

MISR was built and is managed by NASA's Jet Propulsion Laboratory, Pasadena, CA, for NASA's Office of Earth Science, Washington, DC. The Terra satellite is managed by NASA's Goddard Space Flight Center, Greenbelt, MD. JPL is a division of the California Institute of Technology.