Posted by wally on Monday, 12 May 2014 in Clean Technology

Pioneering energy-generating sail is a step closer to reality 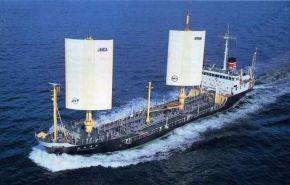 Eco Marine Power (EMP) has announced that it has taken another major step forward towards bringing its pioneering wind and solar harnessing EnergySail to the market by forming a strategic alliance with Teramoto Iron Works Co. - a manufacturer of marine equipment located in Hiroshima, Japan.The strategic alliance with Teramoto Iron Works will provide EMP access to a production base and testing centre in Onomichi City - one of Japan’s most important shipbuilding areas. In addition, EMP will also benefit from being able to tap into the skills and experience of Teramoto Iron Works - a company that has been associated with the shipbuilding sector since 1934 and was involved in the production of innovative rigid sails in the mid 1980’s.The alliance between Teramoto Iron Works and EMP will initially lead to the production of the first pre-commercial EnergySail this year. After production, this device will be installed on a ship along with the EnergySail Automated Control System (ACS) and evaluated during sea trials.The EnergySail ACS was recently displayed in Tokyo at Sea Japan 2014 and is being developed in co-operation with KEI System Ltd.Commenting on the alliance, Yoshitaka Teramoto, President of Teramoto Iron Works said “We look forward to working together with EMP in bringing the EnergySail and Aquarius MRE System to the shipping market. Both these technologies will also give Teramoto Iron Works the opportunity to demonstrate once again our skills and ability to deliver high quality products.”Greg Atkinson, Director and CTO at EMP said: “This is a major step forward for EMP as our alliance with Teramoto Iron Works moves us from testing in the lab to a position where we can deliver, along with our strategic partners, our EnergySail technology. “We are also extremely pleased to be working with a pioneering company that was involved in the early days of rigid sail production and that has a well established reputation for delivering high quality products”.Teramoto Iron Works and EMP will also co-operate on various research & design (R&D) projects and work together to develop further variations of the EnergySail.