Posted by tvernile on Thursday, 22 May 2014 in General Environment 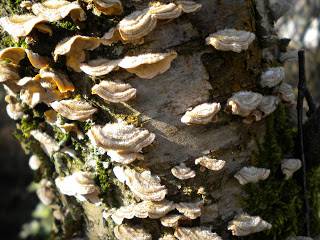 A new system for cleaning soils contaminated with industrial toxins harnesses the power of White rot - a common fungus that decays fallen wood in forests. Research in Finland shows it can also destroy dioxins and poly-aromatic hydrocarbons.

The discovery was made by Erika Winquist, a researcher at Aalto University in Finland. In trials, up to 96% of poly-aromatic hydrocarbon (PAH) compounds and 64% of the dioxins in contaminated soil were broken down after three months.

Where soils are polluted by simple organic pollutants such as oil, it is amenable to treatment by composting. However PAHs and dioxins are recalcitrant and are not broken down by these methods. Some 45% of excavated contaminated soils contain these pollutants, says Winquist.

As a result, these soils are often transported to landfill sites - Finland alone dumps over a million tonnes of contaminated soil to landfill every year.

An alternative is to burning the soil at high temperature, over 1,000C, to destroy the pollutants. But the process is expensive and highly energy intensive - and in any case few countries have sufficient incineration capacity to treat all the polluted soils.

Under Winquist's method, the White rot fungus (Trametes versicolor) is initially grown on pine bark, which naturally contains compounds that prevent the growth of other microbes, making it the ideal fingal growing medium for fungi.

After 4 to 6 weeks, the fungal culture is transferred to the contaminated soil in a temperature-controlled treatment plant where the White rot mycelia grow into the polluted soil, and break down lignins and polluting compounds with lignin-like structures, including dioxins and PAHs.

Fungi could be used to expand bioremediation for the destruction of the more enduring organic pollutants too, states Winquist.