Posted by samschulz on Tuesday, 15 July 2014 in Wildlife Conservation 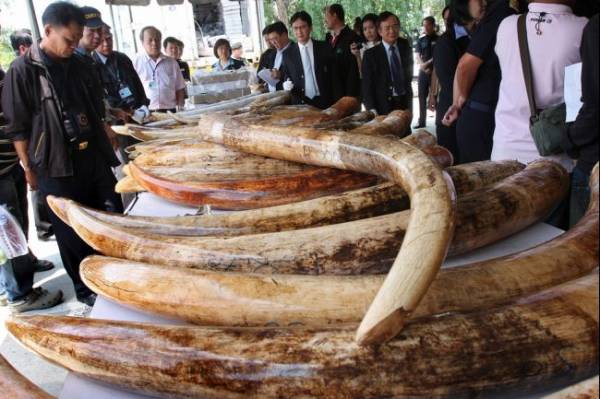 Thailand has until next March to take measures to shut down domestic trade in illegal elephant ivory or it will face trade sanctions, an international meeting on wildlife trade announced today. Governments at a meeting of the Convention on the International Trade of Endangered Species (CITES) requested that Thailand enact legislation to protect elephants by stemming the trade of illegal African ivory in the country. CITES also requested that Thailand implement a registration system for domestic ivory and ivory traders.Any possible sanctions would impact Thailand’s trade in species covered by the convention, including ornamental plants, such as orchids, and reptile leather.WWF has been calling on Thailand to fulfil the pledge it made in 2013 to close its domestic ivory market and welcomes the requirement that is now being imposed on the country.“We feel strongly that a suspension of trade in all CITES goods from Thailand would have been justified. The country has failed to act on this issue over many years, and it should be clear to them that this is their last chance,” said Dr Colman O’Criodain, WWF’s analyst on wildlife trade. Thailand’s ivory market is the largest unregulated market in the world. The trade in Thailand is fuelled by ivory from poached African elephant’s tusks that are smuggled into the country. Current Thai law allows for ivory from domesticated Thai elephants to be sold legally. As a result, large quantities of African ivory can be laundered through Thai shops. Only by closing the domestic trade in ivory can Thailand help eliminate the threat to African elephants.A recent report on Thailand’s ivory market by the wildlife trade monitoring network TRAFFIC, found the availability of ivory for sale in Bangkok has tripled since Thailand pledged to eradicate its domestic ivory market in 2013. The latest CITES figures show that more than 20,000 African elephants are killed by poachers each year. “We are heartened to see that a number of governments, especially the US and EU member states, share our concerns,” said O’Criodain. “WWF has repeatedly highlighted the fact that Thailand’s market is fuelling the illegal assault on African elephants and the public voiced its discontent through an Avaaz petition that gained over a half million signatures.” The meeting also took steps to curtail illegal trade in rhino horn in Viet Nam and Mozambique by highlighting the two countries as priorities in the illegal rhino horn trade. Both countries could face sanctions if they do not take measures to stamp out illegal rhino horn trade within strict deadlines.“Viet Nam and Mozambique were given concrete milestones and deadlines to be achieved over the next year. Firm anti-poaching and trade controls in Africa, as well as strong enforcement and demand reduction in Viet Nam are key elements to solve the rhino poaching crisis. Rhinos are running out of time.” says Dr Carlos Drews, WWF’s Director of Species Conservation.Mozambique must prepare a national rhino action plan detailing its activities. Viet Nam must show how it is increasing law enforcement in domestic markets, combating demand and preventing rhino horn from entering its borders.The next meeting of CITES governments takes place in August 2015. All countries that have been put on notice must meet the requirements being demanded of them prior to that meeting.