Posted by tvernile on Wednesday, 23 July 2014 in Air Quality 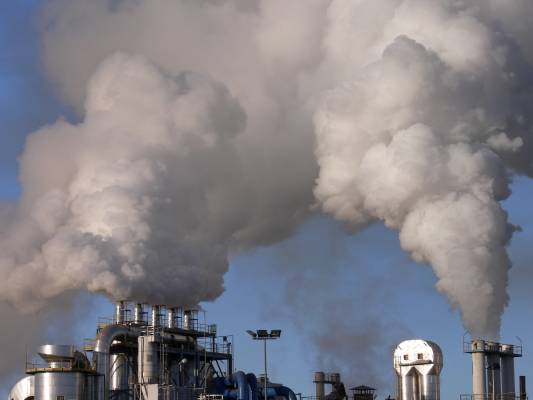 A team of researchers with the Joint Institute for Strategic Energy Analysis, in the U.S. has found that greenhouse gas (GHG) emissions that occur during the lifecycle of shale gas when used as an energy source is roughly equal to that which occurs during the life cycle of conventional natural gas. In their paper published in Proceedings of the National Academy of Sciences, the team describes how they used a meta-analytical procedure they call harmonization to arrive at estimates for emissions of GHG due to extraction and use of shale gas.

Extracting gas from shale rock involves injecting fluid into rock areas deep underground, which creates channels through which the gas can be extracted—the technique is known as hydraulic fracturing, which has been shortened, sometimes derisively, to fracking. Once the gas is removed, cement is injected into the site to prevent the injected liquid from entering groundwater—the gas is then processed for use as an energy source, generally by burning it.

Extraction of so-named shale gas has been in the news a lot lately—techniques for extracting it have led to a dramatic increase in supply and a drop in prices. But it's also led to worries about it creating conditions that lead to earthquakes and sinkholes and fears that it might be emitting a lot of greenhouse gases. In this new effort, the researchers note that efforts to estimate the amount of GHG emissions that occur during the entire lifecycle of shale gas have varied, generally due to differing assumptions by those making the effort, baselines used for comparison and system boundaries. They've come up with a new way to measure such emissions, using a meta-analytical procedure they've dubbed harmonization, which they believe offers a true picture of such emissions—they've used it to compare emissions during the lifecycle of shale natural gas, conventional natural gas and coal. In so doing they have found that emissions during the life cycle of shale natural gas are roughly equivalent to that of conventional natural gas, and that both emit roughly half that of coal.

The researchers acknowledge that because their estimates are based on data found in previously published reports, efforts should be made to confirm actual methaneemissions at on-site extraction sites by measuring them, along with taking measurements of GHG levels in the local area.