Posted by jonehopp on Wednesday, 06 August 2014 in General Environment

Burrowing animals may have been key to stabilizing Earth's oxygen 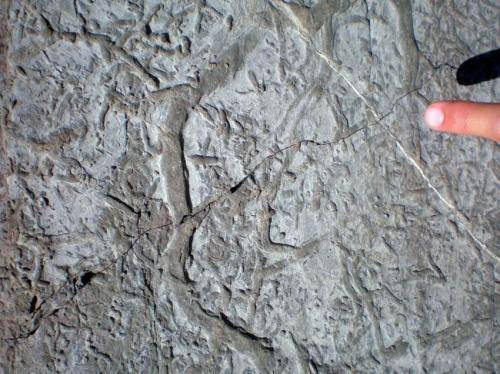 Evolution of the first burrowing animals may have played a major role in stabilizing the Earth's oxygen reservoir, according to a new study in Nature Geoscience.

Around 540 million years ago, the first burrowing animals evolved. When these worms began to mix up the ocean floor's sediments (a process known as bioturbation), their activity came to significantly influence the ocean's phosphorus cycle and as a result, the amount of oxygen in Earth's atmosphere.

"Our research is an attempt to place the spread of animal life in the context of widerbiogeochemical cycles, and we conclude that animal activity had a decreasing impact on the global oxygen reservoir and introduced a stabilizing effect on the connection between the oxygen and phosphorus cycles", says lead author Dr. Richard Boyle from the Nordic Center for Earth Evolution (NordCEE) at the University of Southern Denmark.

The computer modelling study by Dr. Richard Boyle and colleagues from Denmark, Germany, China and the UK, published in Nature Geoscience, links data from the fossil record to well established connections between the phosphorus and oxygen cycles.

Marine organic carbon burial is a source of oxygen to the atmosphere, and its rate is proportional to the amount of phosphate in the oceans. This means that (over geologic timescales) anything that decreases the size of the ocean phosphate reservoir also decreases oxygen. The study focuses on one such removal process, burial of phosphorus in the organic matter in ocean sediments.

The authors hypothesize the following sequence of events: Around 540 million years ago, the evolution of the first burrowing animals significantly increased the extent to which oxygenated waters came into contact with ocean sediments. Exposure to oxygenated conditions caused the bacteria that inhabit such sediments to store phosphate in their cells (something that is observed in modern day experiments). This caused an increase in phosphorus burial in sediments that had been mixed up by burrowing animals. This in turn triggered decreases in marine phosphate concentrations, productivity, organic carbon burial and ultimately oxygen. Because an oxygen decrease was initiated by something requiring oxygen (i.e. the activityburrowing animals) a net negative feedback loop was created.

Boyle states: "It has long been appreciated that organic phosphorus burial is greater from the kind of well oxygenated, well-mixed sediments that animals inhabit, than from poorly mixed, low oxygen "laminated" sediments. The key argument we make in this paper is that this difference is directly attributable to bioturbation. This means that (1) animals are directly involved in an oxygen-regulating cycle or feedback loop that has previously been overlooked, and (2) we can directly test the idea (despite the uncertainties associated with looking so far back in time) by looking for a decrease in ocean oxygenation in conjunction with the spread of bioturbation. My colleague, Dr Tais Dahl from University of Copenhagen, compiled data on ocean metals with oxygen-sensitive burial patterns, which does indeed suggest such an oxygen decrease as bioturbation began – confirming the conclusions of the modelling. It is our hope that wider consideration of this feedback loop and the timing of its onset, will improve our understanding of the extent to which Earth's atmosphere-ocean oxygen reservoir is regulated."

Co-author Professor Tim Lenton of the University of Exeter adds: "We already think this cycle was key to helping stabilise atmospheric oxygen during the Phanerozoic (the last 542 million years) – and that oxygen stability is a good thing for the evolution of plants and animals. What is new in this study is it attributes the oxygen stabilisation to biology – the presence or absence of animals stirring up the ocean sediments."

Earlier this year, researchers from the Nordic Center for Earth Evolution showed that early animals may have needed surprisingly little oxygen to grow, supporting the theory that rising oxygen levels were not crucial for animal life to evolve on Earth.