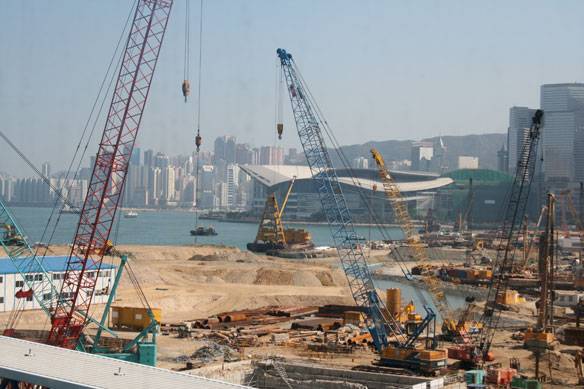 A new study by a team of Chinese and American conservation biologists quantifies the serious consequences of China's recent economic growth on its coastal ecosystems.

By several measures, 1978 was the beginning of a hugely successful surge in the nation's ability to produce economic value, but that surge brought accelerated degradation in the vitality of its coastal ecosystems.

The combined analysis of economic growth, human activities and impacts, and environmental quality data appears in the journal Scientific Reports. It shows that after reforms declared in 1978, which liberalized the Chinese economy to spur growth, many human economic activities with deleterious environmental impacts increased markedly, even in the absence of significant population growth. The economic reforms led to a shift from an inland agrarian economy to an industrial economy concentrated on the coast. In lockstep with that shift came environmental problems such as declines in fish size and diversity, damage to coral reefs, and a surge in harmful algal blooms.

"This study flags the problem and screams out this is a problem that has to be dealt with," said Mark Bertness, professor of ecology and evolutionary biology at Brown University and the paper's second author. "This has all happened within a generation."

Lead author Qiang He of Beijing Normal University, who led the research while a visiting scholar in the Bertness lab at Brown, said the research shows that economic growth alone can generate environmental impacts.

To perform the analysis, He gathered data from 1950 to 2010 from a variety of databases and records. He gathered information on economic growth including per capita growth at the provincial level, indicators of human impacts such as fertilizer use, total fish catch, coastal sewage, mariculture, nautical passenger and freight traffic, and coastal land use for salt production. He also looked at measures of coastal food webs, fish size, red tides, coral cover, and wetland and mangrove habitat.

"They basically flipped a switch in the '70s, so we could go back and data mine and look at these shifts," Bertness said.

In 11 coastal provinces, GDP has grown from about half of the nation's economic output before 1978 to about 60 percent afterward, while the coastal share of population has remained steady in the low 40 percent range.

In the meantime, the data show, many human impacts have increased faster after 1978 than before.

"Pre- and post-reform comparisons revealed significantly higher annual increases in post- than pre-reform periods for six of the 10 impacts with data for both periods," He, Bertness and their co-authors wrote. "We found no differences for the remaining four impacts. We did not find lower growth in post- than in pre-reform periods for any human impact."

Commensurate with the increased pace of human impacts, the growth of many environmental problems quickened, too.

"Across China's seas the trophic diversity and body size of marine fish did not change before 1978, but both have steadily decreased since," they wrote. "Harmful algal blooms have become much more frequent and extensive since the 1980s with red tides increasing from less than 10 per year before 1980 to 70-120 per year since 2000. In the South China Sea, percent cover of many corals has crashed to less than 15 percent of pre-reform levels."

Consistent with the "EKC" hypothesis, which predicts that some economic phenomena will reach a turning point as a matter of course, He and his colleagues examined whether any of the impact activities might be headed that way. If so, that would perhaps provide evidence that the worst of human impacts from economic growth might be abating.

They found that while six of nine impacts for which they had national-scale data appeared to have such a trajectory, there was still not much relief in sight.

Excess fertilizer use appears to have just reached a turning point, for example, but others, such as mariculture, won't reach one until a GDP level that is so distant, it's unrealistic to think that it's feasible.

"If mariculture is to reach its predicted turning point, this will need much more culturable coast areas than the country actually has," He said.

And some turning points have only been reached by transferring the impact from one region to another, meaning the overall activity in the country is not declining, just shifting.

The authors conclude that coastal degradation is not likely to abate by letting ongoing economic trends continue.