Posted by hzicko on Friday, 22 August 2014 in Wildlife Conservation

Where Have All the Elephants Gone? 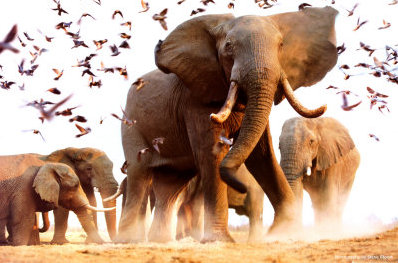 Until about five years ago, conservationists considered the African elephant a success story. New trade laws that helped reduce the once-booming international demand for ivory, awareness campaigns, and better monitoring and protection for elephants had changed the dynamics on the ground. In the 1970s and ’80s, almost 50 percent of elephants were killed by poachers; by 2007, the population was increasing slightly, to somewhere between 500,000 and 700,000 elephants.

But now the poachers are back, and in force. In one instance, rangers found the mangled carcass of an elephant herd’s matriarch, her trunk chopped off and her face gruesomely defleshed in an attempt to reach the top of her jaw to cut out as much of her tusks as possible. George Wittemyer, a wildlife biologist from Colorado State University who has been studying elephants in Kenya for the last 17 years, says that at his field research station in Samburu National Reserve, in the center of the country, a formerly huge family herd has been reduced to several juveniles following around their prepubescent big sister.

Conservationists’ anecdotes about elephants getting butchered are not enough to drive change. In order to get funding, raise awareness and effectively lobby for new government policies, they need quantifiable estimates about the extent of the poaching problem. But tracking those changes in the overall elephant population has always been a problem. Despite their huge size, elephants are difficult to monitor because they travel far and keep different company on different days.

But for the first time in decades, there’s a study that attempts to describe the extent of the damage. In a new paper in the Proceedings of the National Academy of Sciences, Wittemyer and his colleagues outline just how destructive the last few years have been to elephants around Africa. To do so, they used a new data collection method and some sophisticated modeling techniques to make more robust inferences about both the impact of poaching and its causes. Wittemyer and his team found that more than 100,000 elephants — up to 20 percent of the remaining African population — have been illegally killed since 2010.

I reached Wittemyer over the phone this week at his office at Colorado State to talk about how to best quantify an issue as complicated as this one. He’s back in the U.S. to teach biology classes for a semester before heading back out to Samburu National Reserve in December. What follows is a condensed version of the interview, lightly edited for clarity.

David Goldenberg: In the past, you’ve mostly done behavior research, but now you’re counting carcasses. Why that transition?

George Wittemyer: Elephants in Samburu are incredibly habituated to people. It’s a unique population. The ability to sit next to them and have them ignore you and go on their way is really unparalleled. We’re really concerned about losing this incredible window into elephant society and cognition — and poachers are finding these really habituated populations easier to kill.

We had really powerful information from Samburu — we knew the families of elephants getting shot. These anecdotal stories had been really powerful on the global stage but there was a real gap in trying to ascertain what was happening more broadly. That’s when we started trying to figure out how we could take our intensive knowledge and use it to interpret what’s happening more broadly for elephants in general.

In 2002, CITES implemented a continent-wide monitoring program called MIKE [Monitoring the Illegal Killing of Elephants]. We knew illegal killing for ivory was a big deal and we wanted to create an index. But because it’s a secret activity and people don’t want to get caught, it’s really hard to get information on it. But they’re killing elephants — a multi-ton animal — so the carcass is getting left behind after they chop out the tusks. CITES implemented this big program to go around and do carcass surveys around the continent to check out if they were illegally killed or had other causes of death.

DG: Why is the MIKE system better than the previous systems for figuring this stuff out?

GW: Previously, we’ve been doing surveys. Surveys are expensive, infrequent and don’t account for movement or seasonal activities. They also don’t tell you the mechanism for what’s behind those population changes. For example, we know that mule deer are declining across the U.S. but we don’t know the mechanisms of that decline. The MIKE program is designed to get at one specific mechanism that has a strong influence on elephant populations: illegal killing. In that way it’s allowing us insight into a really critical conservation issue.

This is a compilation of everybody’s work in the conservation community. We’re all collecting these data. Every day, we go out and do systematic surveys of the live elephant population. When we hit a carcass — identified by vultures or smell — we do a post-mortem on it to try to figure out the cause of death. If you see bullet holes, its face cut off, human footprints, bullet casings — those are pretty clear indications of poaching.

DG: In your paper, you use two approaches to count poached elephants: the empirical approach and the model-based approach. Can you explain the differences?

GW: When we do these large-scale monitoring problems, there’s always this big debate. Do we want to focus in on a few sites and have superb, high-quality data on which we can make stronger inferences, or do we want to have broader coverage with poorer data?

What we decided to do was to compare the outcomes you would get if you treated the monitoring programs in these two ways. We thought this might help us identify the future of how this monitoring program might be most effectively carried out. Our empirical approach focused on the 12 sites with enough carcasses to make real inferences. We used the percentage of carcasses that were illegally killed as a way to derive the illegal killing rate. For the modeling approach, we took all data on carcasses from the MIKE program and looked at very broad-scale indicators of these carcass rates across all sites — things like level of corruption in the country and level of poverty in the region.

DG: The model-based approach relies on changing consumer demand over time. There’s an amazing chart in your paper that shows the correlation between rising consumer demand for ivory in China and the number of elephants illegally killed in Africa. Why has the demand gone up?

GW: When Ivory coming out of Kenya was destined for random destinations around the globe, illegal killing was low. In 2008 and 2009, though, that shifted, and the majority of the ivory started flowing to China. That’s when we saw this exponential growth in the illegal killing rate and an exponential growth in the local poachers’ price for ivory and this disaster unfolding.

The reasons are complicated because consumers are complicated. In my opinion there are two main stories. First is that the emerging middle class in China has more purchasing power and is buying up trinkets, bangles, chopsticks of ivory for status symbols or gifts — and you have millions of these guys coming into the market a year. Second is that intricate carvings of ivory have become a very high-end art product. Very wealthy individuals in China are investing in these art products not unlike any speculative market of art. Ivory products have been a good investment.

DG: You mentioned that there are these indicators of poverty and corruption at a local level and how they affect illegal killing for ivory. Does that explain what’s going on in Central Africa, where almost two-thirds of the elephant population has been killed in the last few years?

GW: The capacity for effective management in Central Africa looks to be lower. I don’t want to be too negative about it because those guys are really on the front end. They have major militia and insecurity issues that they’re tackling. It’s bigger than just poverty. You’ve got all sorts of militant factions in the Democratic Republic of Congo massacring civilians. The Central African Republic is in civil war. There are some real intractable problems there, and certainly poverty and corruption are part of that. The fact that you can move goods much more easily through those countries is a major problem. There are open-air ivory markets in Kinshasa — that’s not helping in any way.

DG: You state in the paper that even if 50 percent of the elephants that die each year are killed illegally, the population would be OK. Is that right?

One of the things our paper really understates is the impact of 100,000 elephants killed in three years. In most populations across Africa, all of the primary breeding males are now gone, and now they’re going after the matriarchs. It’s tearing the fabric of elephant society.