Posted by Tiny on Friday, 19 September 2014 in Air Quality 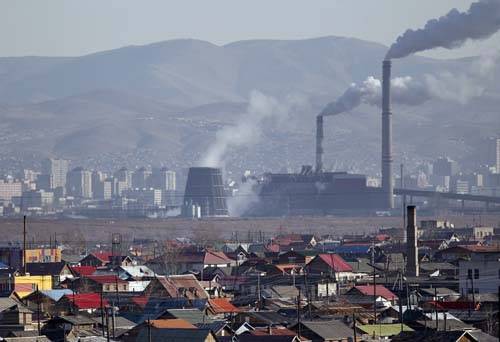 The WHO has released a new study ranking countries with the worst air pollution. When we consider air pollution most of us will automatically think of China. However, it was nowhere to be found in the top 10 offenders. This, by the way, is not because they’ve suddenly cleaned up their act, but rather because this study ranked countries as a whole, rather than cities.

So here are the top 5 countries with the worst air pollution, and what they are trying to do to combat it.

1. Pakistan
Pakistan made #1 on the list with a PM 2.5 pollution level of 101 ug/m3. Now, that might not make sense so let me break it down: PM 2.5 stands for the size of the particles of pollution. The size (2.5) is frequently cited as the most detrimental because it can travel deep into lungs and cause a variety of ailments. Good examples of these particles are smoke, mold and dust. The ug/m3 part stands for micrograms per unit meter of air. So Pakistan has 101 micrograms of PM 2.5 pollutants per unit meter of air.

This level of pollution can be fatal to certain people with compromised respiratory systems and is blamed for killing thousands each year. Such pollutants also cause at least 80,000 hospitalizations in Pakistan alone. Although Pakistan has hosted a number of green air initiatives, and Coca-Cola has even led the fight in establishing better air quality, the country continues to suffer from some of the worst pollution on the planet.

Part of this is because Pakistan is dealing with crippling security threats on an everyday basis. Recent attacks on Karachi’s International Airport and Taliban offenses from the Afghan border mean that much of the government budget is devoted to security rather than health and the environment. Because of this, Pakistanis will continue to suffer a host of complications due to pollution.

2. Qatar
Qatar ranks in as the second worst country with 92 units of PM 2.5 micrograms per unit meter of air. Heavy construction in a relatively small area, combined with one of the biggest growing international airports have converged to create truly terrible air quality. However, Qatar is doing something about this.

The Sahara Forest Project, which is somewhat oddly named as the desert in Qatar is not the Sahara (not even close), is using state of the art techniques to plant trees, bushes, and bring sustainable water and energy designs to the miles of desert that surround the city’s countryside. Further, by trapping seawater and evaporating it into the air, they are looking to reduce desert temperatures to create a more humid climate. If it is successful, it could help bring down the pollution levels in Qatar substantially.

Although some flinch at the idea of removing a desert ecosystem that has existed for thousands of years, projects such as these have been accomplished before, in desertification areas of Northern Africa. The results have actually been positive, showing little impact on overall environmental stability.

3. Afghanistan
Afghanistan comes in just after Qatar with a PM 2.5 level of 84 micrograms per unit meter of air. Part of this naturally has to do with the recent war. Rubble, creating a mix of toxic building materials in the air, along with bombs, smoke, generators which run on diesel, and air travel in and out of the country have come together in a disastrous mix of toxic pollutants.

Sadly, not a whole lot is planned for invigorating the air quality of the country. Although Afghanistan does have a Green Club, a lot of the activities are simply raising awareness for the problem as actual funds to institute programs are near impossible to find.

4. Bangladesh
This is one of the few nations where air quality has fallen steadily over the past few years, the air here has a PM 2.5 level of 79 micrograms per unit meter of air. Air quality is something which sends thousands of Bangladeshis to hospitals every year, especially in urban areas where massive factories have sprung up.

Part of this is because the country provides very cheap labor and industry, which has led to a deregulation of sorts in the country. Because of loose standards for the environment, companies can save labor money but create a large environmental impact.

Enter the Bangladesh Green Roof Movement. Started by local groups, this is a movement which could have a great impact on the country. By planting gardens they not only help with food sustainability, but help reduce the pollution levels inside the country. While Bangladesh has a long way to go, it’s heartening to see that the citizens are taking it upon themselves to try to create a greener future.

5. Iran
Iran rounds out the top five most polluted countries with a PM 2.5 level of 76 micrograms per unit meter of air. Part of the reason for this is simply a lack of quality products. The gasoline used is often poor quality, the building materials used contain asbestos, and overcrowding and a large youth population has led to congested streets.

However, with such a large youth population, Iran has also started championing some interesting environmental movements. Demonstrations where people line up inside of public parks with breathing masks on have spread on social media. Although environmental issues are often the bastion of upper-middle class people in developing nations, in Iran’s case citizens from all walks of life have gotten involved. This includes villagers renouncing poor cooking methods and poaching.

Although the current president of Iran has remained fairly mum on the environment, most agree he is far more open to it than Iran’s former president. This has given the Iranian youth hope that environmental consciousness improves as their country moves forward.