Posted by Wolf on Tuesday, 28 October 2014 in Population

How to save the planet? Stop having children 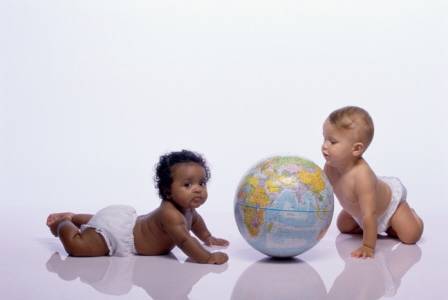 Doctors should be encouraging people to have smaller families for the sake of the environment, says GP

"I was sterilised after the birth of my second son because I believed I had no right to have more than two children – it would have been more than my reproductive share," says Pippa Hayes, 56. "Humans are tipping the balance with the natural world, to the detriment of both humanity and the other species that share our lovely, finite planet."

As a GP, Hayes feels strongly that medical professionals should encourage people to have smaller families. "Doctors should be promoting replacement number of children; two per couple, one per single parent," she says. "We don't need to do this by coercion, we just need to talk about it."

Hayes is not alone in believing that bringing children into the world is an act of such environmental destructiveness that it requires mitigating. Three years ago, Sansha Harris, 42, discussed sterilisation with her doctor, knowing she never wanted children. Harris was talked out of the operation but her attitude is unchanged. "I've thought since I was a teenager that the world would be a better place with fewer people," she says.

Likewise Claire Coveney, 32, who decided at 26 she didn't want a family. "I'm not saying that everyone should go down this route, it goes against most people's natural instincts," she concedes. "What I would suggest is that people consider the wider repercussions of having more than one child."

The results of a YouGov survey of 2,362 adults, commissioned earlier this year by the organisation Population Matters, revealed that 63% of UK adults think environmental conservation should be taken into account when deciding how many children to have. Of that group, 51% believe people should have no more than two offspring.

Population Matters has seen its membership double in the last five years and now has 6,000 people on its mailing list. It promotes "sustainable family size" and campaigns for universal access to family planning services. It suggests that child benefit be paid for the first two children only, with families being means-tested before receiving subsidies for a third.

Like several other prominent naturalists, Chris Packham shares this ethos. "With wild species becoming extinct at hundreds of times the normal rate, we really have to recognise the connection and think hard about our sheer numbers, as well as our consumption and technology," he said at the time of becoming a patron of the charity.

Jules Pretty, professor of environment and society at the University of Essex, believes it is our consumption, not our procreation, on which we need to slam the brakes. Concerns about overpopulation, he says, are misplaced.

"The earth's population will rise to 9bn, possibly more," Pretty says. "But if you look carefully at projections and fertility rates across the world, the population is on track to stabilise this century, almost certainly by 2050."

"In 97 countries, the average women now has fewer than two children." (In the UK, it is 1.7.) "You need about 2.1 births to result in straight replacement because of child mortality, so we're already heading for a decline," he says.

Pretty believes that those in affluent countries should concentrate on cutting consumption so that a family of three, for instance, emits no more carbon into the atmosphere than the original couple, pre-child. This, he thinks, is doable through individual choices about energy use, purchasing and transportation.

"The big challenge is to develop a greener economy," Pretty says. "Somehow to make sure we're able to consume goods and services on a sustainable footing so we don't destroy the planet."

For Hayes, however, big families will always be a problem. "If a large British family lives as sustainably as it can, they will still need the carbon-emitting infrastructure of homes, transport, schools and hospitals. Vast areas of our planet are going to be uninhabitable as climate change progresses but we can reduce this impact by limiting our families to replacement size."