Posted by Ecological friends on Wednesday, 22 October 2014 in Animals

Meet the toughest animal on the planet: The water bear 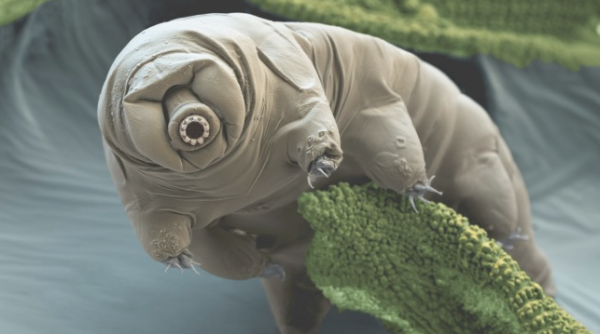 It's often said cockroaches could withstand a nuclear explosion.

But another creature, dubbed 'nature's greatest survivor,' is even more invincible, and you've probably never even heard of it.

Tardigrades, also known as water bears, are some of the most fascinating animals in world because they can live happily in the most extreme conditions.

In 1933, the owner of a New York City speakeasy and three cronies embarked on a rather unoriginal scheme to make a quick couple grand: Take out three life insurance policies on the bar’s deepest alcoholic, Mike Malloy, then kill him.

First, they pumped him full of ungodly amounts of liquor. When that didn’t work, they poisoned the hooch. Mike didn’t mind. Then came the sandwiches of rotten sardines and broken glass and metal shavings. Mike reportedly loved them. Next they dropped him in the snow and poured cold water on him. It didn’t faze Mike. Then they ran him over with a cab, which only broke his arm. The conspirators finally succeeded when they boozed Mike up, ran a tube down his throat, and pumped him full of carbon monoxide. A scanning electron micrograph of a water bear. Like regular bears, tardigrades have claws, which help in locomotion. Unlike regular bears is everything else about tardigrades, particularly their lack of a totally crappy attitude all the time. Image: Bob Goldstein and Vicky Madden

They don’t come much tougher than Mike the Durable, as he is remembered. Except in the microscopic world beneath our feet, where there lives what is perhaps the toughest creature on Earth: the tardigrade. Also known as the water bear (because it looks like an adorable little many-legged bear), this exceedingly tiny critter has an incredible resistance to just about everything. Go ahead and boil it, freeze it, irradiate it, and toss it into the vacuum of space — it won’t die. If it were big enough to eat a glass sandwich, it probably could survive that too.

The water bear’s trick is something called cryptobiosis, in which it brings its metabolic processes nearly to a halt. In this state it can dehydrate to 3 percent of its normal water content in what is called desiccation, becoming a husk of its former self. But just add water and the tardigrade roars back to life like Mike the Durable emerging from a bender and continues trudging along, puncturing algae and other organisms with a mouthpart called a stylet and sucking out the nutrients.

“They are probably the most extreme survivors that we know of among animals,” said biologist Bob Goldstein of the University of North Carolina at Chapel Hill. “People talk about cockroaches surviving anything. I think long after the cockroaches would be killed we’d still have dried water bears that could be rehydrated and be alive.”

“Is It Cold in Here?” Asked a Water Bear NEVER

This hibernation of sorts isn’t happening for a single season, like a true bear (tardigrades are invertebrates). As far as scientists can tell, water bears can be dried out for at least a decade and still revivify, only to find their clothes are suddenly out of style.

Mike the Durable did just fine in the freezing cold, but the temperatures the water bear endures in cryptobiosis defy belief. It can survive in a lab environment of just 1 degree kelvin. That’s an astonishing -458 degrees Fahrenheit, where matter goes bizarro, with gases becoming liquids and liquids becoming solids.

At this temperature the movements of the normally frenzied atoms inside the water bear come almost to a standstill, yet the creature endures. And that’s all the more incredible when you consider that the water bear indeed has a brain, a relatively simple one, sure, but a brain that somehow emerges from this unscathed.

Water bears also can tolerate pressures six times that of the deepest oceans. And a few of them once survived an experiment that subjected them to 10 days exposed to the vacuum of space. (While we’re on the topic, humans can survive for a couple minutes, max. One poor fellow at NASA accidentally depressurized his suit in a vacuum chamber in 1965 and lost consciousness after 15 seconds. When he woke up, he said his last memory was feeling the water on his tongue boiling, which I’m guessing felt a bit like Pop Rocks, only somehow even worse for your body.)

Anyway, tardigrades. They can take hundreds of times the radiation that would kill a human. Water bears don’t mind hot water either–like, 300 degrees Fahrenheit hot. So the question is: why? Why evolve to survive the kind of cold that only scientists can create in a lab, and pressures that have never even existed on our planet?

Water bears don’t even necessarily inhabit extreme habitats like, say, boiling springs where certain bacteria proliferate. Therefore the term “extremophile” that has been applied to tardigrades over the years isn’t entirely accurate. Just because they’re capable of surviving these harsh environments doesn’t mean they seek them out.

They actually prefer regular old dirt and sand and moss all over the world. I mean, would you rather stay in a Motel 6 in a lake of boiling acidic water or lounge around on a beach resort and drink algae cocktails? (Why this isn’t a BuzzFeed quiz yet is beyond me. It’s gold. There’s untold billions of water bears on Earth. Page views, BuzzFeed. What’s the sound of a billion water bears clicking? Boom, another quiz.)

But that isn’t to say there aren’t troubles in the tardigrade version of paradise. “If you’re living in dirt,” said Goldstein, “there’s a danger of desiccation all the time.” If, say, the sun starts drying out the surface, one option is to move farther down into the soil. But “if you go too far down, there’s not going to be much food. So they really probably have to live in a fringe where they need to get food, but there’s always danger of drying out.”

The water bear’s incredible feats of survival may simply stem from a tough life in the dirt. But there’s also the question of how it does this, and it’s a perplexing one at that. Goldstein’s lab is researching this, and he reckons that water bears don’t just have one simple trick, but a range of strategies to be able to endure drying out and eventually reanimating.

“There’s one that we know of, which is some animals that survive drying make a sugar called trehalose,” he said. “And trehalose sort of replaces water as they dry down, so it will make glassy surfaces where normally water would be sitting. That probably helps prevent a lot of the damage that normally occurs when you dry something down or when you rehydrate it.” Not all of the 1,000 or so species of water bears produce this sugar though, he says, so there must be some other trick going on.

Ironically enough, these incredibly hardy creatures are very difficult to grow in the lab, but Goldstein has had great success where many others have failed. And, like so many great things in this world, it all began in a shed in England, where a regular old chap mastered their breeding to sell them to local schools for scientific experiments. He was so good at it, in fact, that he never needed to venture out to recollect specimens. And their descendants now crawl around Goldstein’s lab, totally unaware of how incredibly lucky they are to not be tortured by school children day in and day out. A scanning electron micrograph of three awkwardly cuddling water bears. “You know what they say: Two’s company, three’s a crowd. We’re looking at you, Paul. Seriously though, Paul. You need to scram.” Image: Willow Gabriel

“Some organisms just can’t be raised in labs,” Goldstein said. “You bring them in and try to mimic what’s going on outside and they just don’t grow up. So we were lucky, actually, people were having a hard time growing water bears in labs continuously. And this guy in England had figured it out.”

Thanks to this breakthrough, Goldstein and other scientists are exploring the possibility of utilizing the water bear as science’s next fruit fly, that ubiquitous test subject that has yielded so many momentous discoveries. The water bear’s small size means you can pack a ton of them into a lab, plus they reproduce quickly and have a relatively compact genome to work with. Also, they’re way cuter than fruit flies and they don’t fall into your sodas and stuff.

In addition, Thomas Boothby, a postdoctoral scientist working under Goldstein, is conducting research into how water bears are able to survive dried out at room temperature, with a mind to apply their magic to vaccines. So much of the cost of these, you see, comes from chilling them as they’re shuttled around the world. What if the water bear could teach us how to maintain vaccines at room temperature?

I’d also propose that we harness the water bear’s powers to finally make cryonicspossible way earlier than anyone could have expected. Then maybe in a few years we can resuscitate humans currently frozen in cryonic tubes and tell them that it’s actually 2149, but the world is still kind of a mess. Their disappointment would be hilarious. Also, that’s maybe unethical. But definitely hilarious.