Posted by jonehopp on Sunday, 28 December 2014 in Climate Change

The Melting of Greenland 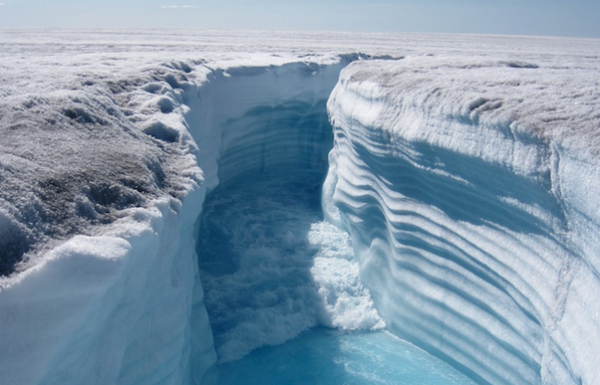 Greenland’s ice sheet shrank by an average of 243 billion tonnes a year between 2003 and 2009 – a rate of melting that is enough to raise the world’s sea levels by 0.68 mm per year.

In what is claimed as the first detailed study, geologist Beata Csatho, of the University of Buffalo in the US, and colleagues report in the Proceedings of the National Academy of Sciences that they used satellite and aerial data to reconstruct changes in the ice sheet at 100,000 places, and to confirm that the process of losing 277 cubic kilometres of ice a year is more complex than anyone had predicted.

The Greenland ice sheet is the second biggest body of ice on Earth − second only to Antarctica − and its role in the machinery of the northern hemisphere climate is profound.

It has been closely studied for decades, but such are the conditions in the high Arctic that researchers have tended to make careful measurements of ice melt and glacier calving in fixed locations – in particular, at four glaciers − and then try to estimate what that might mean for the island as a whole.

“The great importance of our data is that, for the first time, we have a comprehensive picture of how all of Greenland’s glaciers have changed over the past decade,” Dr Csatho said.

The study looked at readings from NASA’s ice, cloud and land elevation satellite ICESat, and from aerial surveys of 242 glaciers wider than 1.5 km at their outlets, to get a more complete picture of melting, loss and – in some cases – thickening of the ice sheet as a whole.

Previous studies have focused on the four glaciers. One of them, Jakobshavn, has doubled its speed of flow since 2003, and closer studies have begun to reveal more about the dynamics of individual flows.

But the real strength of the study is that it establishes the pattern of ice melt in more detail, and suggests that climate models may not give a clear enough picture of the future of the ice cap. To put it crudely, Greenland could lose ice faster in the future than any of today’s predictions suggest.

Meanwhile, a team from the UK has been trying to work out what is happening on the surface of the ice sheet. Each summer, of course, some of the ice melts. Some of this gets to the sea, but some freezes again in the natural seasonal order of things.

But glaciology researcher Amber Leeson, of the University of Leeds, and colleagues report in Nature Climate Change that the “supraglacial” lakes that form each summer could also affect ice flow.

Their computer simulations suggest that these lakes will migrate further inland as the century wears on and the world continues to warm. Ice reflects heat, water absorbs it. So the process could trigger further melting. Some of this extra meltwater could slide or drain to the base of the glacier, lubricating its flow and accelerating the process yet again.

“Our research shows that, by 2060, the area of Greenland covered by them will double,” Dr Leeson said. “When you pour pancake batter into a pan, if it rushes quickly to the edge of the pan, you end up with a thin pancake. It’s similar to what happens with ice sheets. The faster it flows, the thinner it will be.

“When the ice sheet is thinner, it is at a slightly lower elevation and at the mercy of warmer air temperatures than it would be if it were thicker, increasing the size of the melt zone around the edge of the ice sheet.”

In the last 40 years, the band in which such supraglacial lakes can form has crept 56 km inland. By 2060, the simulations now suggest, it could reach 110km inland, doubling the area of coverage and delivering yet more meltwater to fuel further warming.