Posted by liyicheng0507 on Monday, 09 February 2015 in Water Conservation 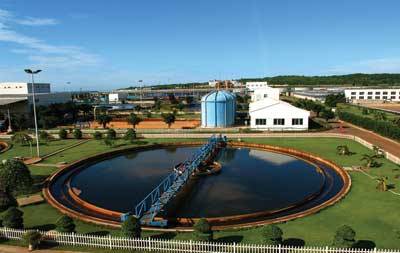 In line with these trends, increasingly more companies operating in China are pursuing corporate social responsibility and sustainability initiatives, which can include programs that promote higher levels of environmental protection and measures to reduce water consumption.

In China's pulp and paper industry, a model example of water conservation, water management efficiency, and wastewater treatment is APP-China's Jinhai pulp and paper facility, the largest pulp mill in China and the world's largest single-line pulp facility. Built in 2003 and located in the Hainan Providence in Southern China, the plant produces 1 million tons of pulp and 900,000 tons of fine paper per year, and also houses the Hainan PM 2, one of the most advanced paper machines in the world. At over 600 meters in length, the Hainan PM 2 is also the world's largest paper machine. Effluent from Jinhai is treated to a high enough level for use in the facility's environmental park and for supporting a thriving koi fish population.

Consistent with Asia Pulp and Paper's multi-tiered corporate sustainability program, APP-China has implemented a number of integrated water conservation strategies and advanced water treatment technologies that have effectively made the facility a world leader among pulp and paper mills in terms of water efficiency and discharge. The company's environmental commitments include a Paper Contract with China manifesto in support of its sustainable development strategy. Initially launched in 2008 and upgraded in 2011, the manifesto promotes clear goals for water consumption and wastewater discharge per ton of pulp and paper. Additionally, in terms of water management, APP-China and its six major mills in China together pledged commitment to the United Nations CEO Water Mandate in 2011.

"Our efforts in water conservation are in support of APP's objective to become a socially and environmentally responsible manufacturer," said Kevin Zhang, director of public relations with APP-China. "By improving water management efficiency, we can also reduce production costs."

With water a critical resource in pulp and paper production and relied on for nearly every step of the manufacturing process, the water conserving strategies employed at the Jinhai facility help alleviate potential risks associated with water shortages. This is especially significant considering the plant's location.

Additionally, since Jinhai's manufacturing operations encompass both pulp and paper production and run 24 hours a day, any kind of disruption in water supply would impact the facility's output or even compel a halt in production, inevitably affecting the company's profits, Zhang noted.

"Taking these points into account during the initial construction of the facility, we equipped it with state-of-the-art technologies, of which water management efficiency is top priority," he said. "We wanted to ensure an optimal rate of water resources utilization."

Among the many water conserving technologies employed at the facility is an advanced compact press, which effectively lowers water use by 7.1 tons per ton of pulp as compared to the more traditionally used diffuser wash press. Incorporated since the facility was established, the compact press accounts for the highest amount of water savings with 23,430 tons of water conserved on a daily basis and 8.2 million tons per year.

Anthony Chang, president director assistant for Jinhai, said after the facility commenced production, further upgrades were made to maximize water conservation and efficiency.

"Sealing water from all production premises are collected and reused for spray felt and other processes, achieving water savings of 3,500 m3 on a daily basis," he said. "Additionally, backwashing water from the cooling tower is reused for washing lime stones in the facility lime stone system, saving 2,300 m3 of water per day."

Another strategy includes the reuse of condensed water gathered from public pipe racks for use as make-up water in multi-fuel boilers, contributing to water savings of 600 m3 per day, and condensed water from chlorine dioxide plant steam is also recovered and passed through a recovery pool and recovery pump to the cooling tower at the facility's chemical preparation department, achieving 660 m3 of daily water savings, according to Chang.

"Through ongoing onsite monitoring and trials, the Jinhai facility has dedicated research and development efforts aimed at improving the water efficiency of the facility's production processes," Chang said "These efforts have resulted in the granting of two patents for the plant's demineralizing treatment system water conservation device, as well as for the resin loading device of the system."

Examining water usage trends from the year in which the Jinhai facility was first established, investments in water management technologies have effectively reduced overall water consumption at the plant from 32 m3 per ton of pulp in 2005 down to 24 m3 per ton of pulp at the present, according to statistics supplied by APP-China.

APP-China has also focused heavily on wastewater treatment and discharge at the Jinhai facility, incorporating innovative technological processes that contribute to enhanced treatment of waste streams.

"A majority of pollutants that remain in wastewater from pulp production are difficult to process," Chang said. "At Jinhai, we incorporated a three-pronged approach that involves chemical, biological, and advanced oxidation treatment."

The water quality attained after this process far surpasses water quality standards in the Hainan region and even that of China's national standards, Chang said.

"To directly demonstrate our achievements in the realm of wastewater treatment, the Jinhai facility began to implement pisciculture efforts with processed wastewater in 2004. After a period of eight years, the breeding and growth of all fish involved has remained normal with no noticeable change," he said.

While the Jinhai facility represents a significant advance in the possibilities for wastewater treatment and water-saving innovation, higher standards of water reductions can still be achieved in China's pulp and paper industry as a whole.

"There is still a great deal of room for improvement in terms of efforts towards furthering water conservation and improving water efficiency," Zhang said. "For instance, pulp and paper enterprises could facilitate structural improvements through pulp and paper integration efforts, or manage water usage according to specific requirements for water quantity and quality in different processes. Additionally, from our perspective, a major trend towards improving water efficiency moving forward is the further application of treated wastewater reuse technologies."