World's Oceans Clogged By Millions Of Tons Of Plastic Trash 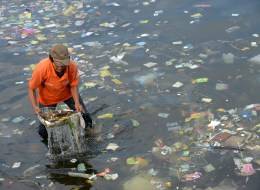 WASHINGTON, Feb 12 (Reuters) - The world's oceans are clogged with plastic debris, but how much of it finds its way into the seas annually? Enough to place the equivalent of five grocery bags full of plastic trash on every foot (30 cm) of every nation's coastline around the globe.

That's according to scientists who released research on Thursday estimating that a staggering 8 million metric tones of plastic pollution enter the oceans each year from the world's 192 coastal countries based on 2010 data.

Based on rising waste levels, they estimated that more than 9 million tons would end up in the oceans in 2015.

Experts have sounded the alarm in recent years over how plastic pollution is killing huge numbers of seabirds, marine mammals, sea turtles and other creatures while sullying ocean ecosystems.

China was responsible for the most ocean plastic pollution per year with an estimated 2.4 million tons, about 30 percent of the global total, followed by Indonesia, the Philippines, Vietnam, Sri Lanka, Thailand, Egypt, Malaysia, Nigeria and Bangladesh.

The United States was the only rich industrialized nation in the top 20, and it ranked No. 20. Coastal EU nations combined would rank 18th.

"In short, you name it and it is probably somewhere in the marine environment," said Kara Lavender Law, a research professor of oceanography with the Massachusetts-based Sea Education Association.

The estimates were based on information including World Bank data for trash generated per person in all nations with a coastline, coastal population density, the amount of plastic waste countries produce and the quality of their waste-management practices.

"I think this is a wake-up call for how much waste we produce," said University of Georgia environmental engineering professor Jenna Jambeck.

The researchers calculated that 275 million tons of plastic waste was generated in the 192 coastal countries that year, with an estimated 8 million tons entering the ocean and a possible range between 4.8 million and 12.7 million tons.

"The most pressing need is to capture plastic waste to prevent it from entering the environment," Law said. "This means investing in waste management infrastructure, especially in those countries with rapidly developing economies."

"In high-income countries, we also have a responsibility to reduce the amount of waste, especially plastic waste, that we produce," she added.

The research was published in the journal Science. (Reporting by Will Dunham; Editing by Sandra Maler)