Eight million tons of plastic is dumped at sea each year. 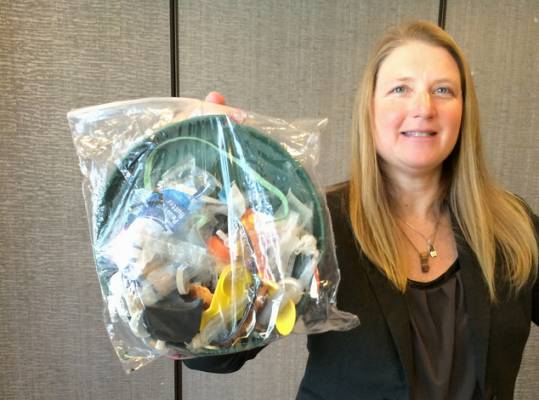 Eight million tons of plastic is dumped at sea each year...that's five whole bags-full for every foot of the world's coastline

China topped the league, accounting for up to 3.5 million tons a year

Other main offenders are Indonesia, Philippines, Vietnam and Sri Lanka

United States contributes just 77,000 tons, which is less than 1%

So much plastic is dumped into the sea each year that it would fill five carrier bags for every foot of coastline on the planet, scientists have warned.

Around 8million tons of plastic bottles, bags, toys and other plastic rubbish ends up in the world’s oceans each year.

The ‘staggering’ total is much higher than previous estimates – and enough to leave an area around 25 times the size of Manchester ankle-deep in plastic waste. 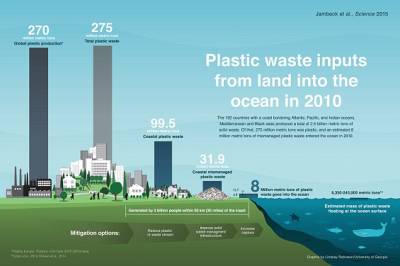 More than half of the plastic waste that flows into the oceans comes from just five countries: China, Indonesia, Philippines, Vietnam and Sri Lanka.

Because of the difficulties in working out the exact amount, since much of it may have sunk, the scientists said the true figure could be as much as 12.7million tons polluting the ocean each year.

Dr Jenna Jambeck, one of the researchers from the University of Georgia in the US, said we are becoming ‘overwhelmed by our waste’.

The team also warned that this ‘ocean of plastic’ can harm sea life.

Turtles can mistake plastic bags for jellyfish and eat them. The bags then block their stomachs, which causes them to starve to death.

Sea birds also often mistake floating plastic for food; over 90 per cent of fulmars found dead around the North Sea have plastic in their stomachs. It is also feared that it could harm our health to eat fish that have consumed plastic.

The scientists reached their figures by analysing data on the amount of waste generated and how well it is disposed of in 192 coastal countries.

This included litter left on beaches as well as plastic from fly-tipping and badly-managed rubbish dumps.

Their figures are much higher than those from previous studies, which only looked at rubbish floating on the surface and did not factor in the plastic that had sunk to the sea floor or was trapped in ice.

They estimated that between 4.7million and 12.7million tons of plastic made its way into the world’s oceans in 2010, with a best estimate of 8million tons.

The figure is expected to rise each year. Between 2010 and 2025, some 155million tons of plastic could be dumped into the ocean – enough to fill 100 bags per foot of coastline.

Piled one on top of the other, the bags would create a wall of rubbish 100ft high.

China topped the league of plastic polluters, accounting for up to 3.5million tons a year, or almost a quarter of the total, the American Association for Advancement of Science’s annual conference in San Jose, California, heard.

Writing in the journal Science, Dr Jambeck said that while the UK isn’t among the worst polluters, we cannot be complacent, adding that global action is needed to tackle the problem.

Co-author Roland Geyer, associate professor of industrial ecology at the University of California, Santa Barbara, said: ‘Large-scale removal of plastic marine debris is not going to be cost-effective and quite likely simply unfeasible.

‘This means we need to prevent plastic from entering the oceans in the first place through better waste management, more reuse and recycling, better product design and material substitution.’ 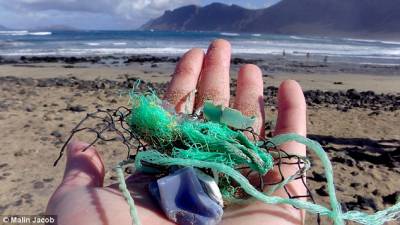 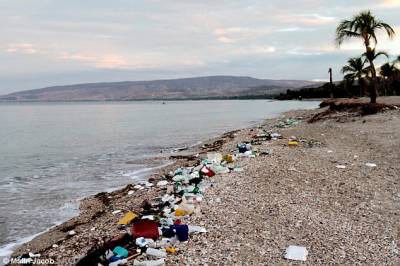 Co-author Roland Geyer, associate professor of industrial ecology at the University of California, Santa Barbara, said: ‘Large-scale removal of plastic marine debris is not going to be cost-effective and quite likely simply unfeasible.

‘This means we need to prevent plastic from entering the oceans in the first place through better waste management, more reuse and recycling, better product design and material substitution.’

Frank Davis, director of the National Centre for Ecological Analysis and Synthesis in the US, said: ‘The numbers are staggering but the problem is not insurmountable.’

The Daily Mail has been campaigning for seven years for tougher action to reduce plastic bag waste. A major victory came in June last year when a 5p charge for plastic bags was announced in England.

The charge, which will be introduced by October, is expected to reduce bag use by up to 80 per cent and raise up to £100million a year for good causes.

Around eight billion bags are currently handed out in England each year – or 150 per person.

Campaigners say the carrier bags can take up to 1,000 years to degrade – but are used on average for just 20 minutes. 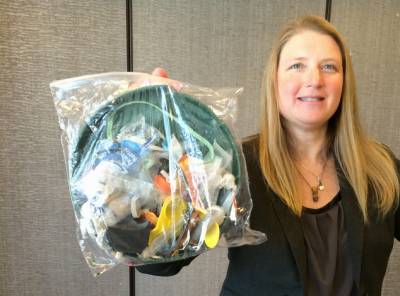 Jenna Jambeck, an environment engineering professor at the University of Georgia, holds a plastic bag with trash collected last fall from a clean up at Panama Beach in Florida. Each year about 8.8 million tons of plastic ends up in the world oceans, a quantity much higher than previous estimates, according to a new study that tracked marine debris from its source