Posted by archerzhh on Tuesday, 26 May 2015 in Transportation 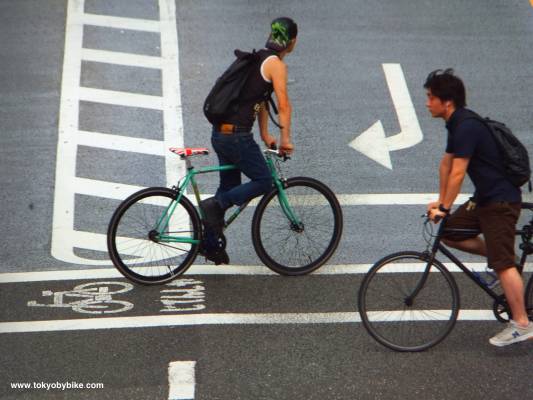 Cycling to work in Tokyo may do more than just keep you healthy, fit and happy, it also may help you earn a little additional income on the side if our employer isn't smart enough to have a bike to work policy in place.

According to the Ministry of Health, Labor and Welfare 86% of Japanese employers pay the commuting fees of their employees, and as the majority of employees in Tokyo travel to work by train companies usually take the easiest route when it comes to payments and simply deposit the cost of of a monthly commuter pass into the accounts of their employees along with their wages each month.  Bicycle commuters, however, exist in a grey zone. As most companies have no policy surrounding bicycle commuting (other than often trying to ban employees from cycling to work) they continue to deposit commuting allowances into the accounts of those who choose to cycle to work.

So by cycling to work in Japan, you're not just saving money, you're making money. In my case for example, my employer deposits ¥9,660 into my account each month to cover the cost of a commuter pass between my home station and work, yet I choose to cycle, paying just ¥100 per day for bicycle parking. Working on the assumption of 20 work days in a month I will pay ¥2,000 each month for bicycle parking and pocket the remaining ¥7,660. Thank you very much!

Some however have questioned the soundness of my theory when taking into account what they call the "hidden costs" of bicycle commuting, arguing that the cost of maintenance, clothing and equipment will quickly consume any additional income received.  Not surprisingly the people who believe cycling is expensive are recreational rather than utilitarian cyclists as they quote the need for cycling specific clothing and kit that really isn't necessary for the everyday cyclist.

Some of the "hidden costs" raised include:

THE COST OF BICYCLE MAINTENANCE

Bicycles must be properly maintained in order to be both comfortable and safe. But personally I spend very little each year on maintaining my bicycle, occasionally I'll replace brake pads, or cables, but rarely have to purchase tubes or pay for puncture repairs since fitting a pair of indestructible Schwalbe Puncture Proof tyres to my commuter bicycle.  In fact new tyres are always the most expensive maintenance item on my list, but as they only need replacing every few years the cost isn't that great when averaged out over the length of use. Bicycle maintenance barely makes a dent in my budget.

THE COST OF CYCLING CLOTHING

Helmets, gloves, wind shell, thermal underwear, backpacks, and socks were all cited to me as significant hidden costs of bicycle commuting, But when you commute in your work clothes and average out the cost of some winter kit over the lifetime of its use you're really not spending a significant amount each year. The only speciality clothing item I own, that I probably wouldn't otherwise, is a Wind Stopper (Gore Tex) jacket I purchased on sale for less than ¥2,000 well over 10 years ago, everything else I need for cycling to work comes directly from my wardrobe.

THE COST OF CONSUMABLES

Here is a hidden cost I don't often think about, but one that is certainly a slow drain on my finances, consumables. I'll admit I seem to be constantly replacing batteries in my lights and in the summer I use alcohol wipes to freshen up with when I arrive at work. While they are expenses I would not incur when if commuting by train they are insignificant ones at that.

THE COST OF CYCLING INSURANCE

While not necessary, if you're spending a lot of time on the roads of Tokyo on your bicycle it is probably a good idea to have some form of insurance to cover yourself (and a third party) in the unlikely event of an accident. Almost every major insurer in Japan offers cycling insurance and with a number of high profile accidents in the news lately insurers are paying a lot more attention to cycling insurance and competition in the area to offer more for less is heating up. Perhaps the most simple way to purchase cycling insurance is via the Internet or an electronic kiosk at any 7/11 convenience store where cycling insurance can be bought for as little as ¥5,000 per year.

Utilising a commuter pass a round trip to work is ¥483 while to cost of a regular ticket for the same journey is ¥600. Therefore on days when the weather isn't conducive to cycling, days I'm feeling under the weather myself, and days when I plan to have a drink or two after work, I have to pay the full ¥600 ticket price, a significant ¥117 more than the commuter ticket price. Fortunately, unless I'm taking the train an awful lot during the month I don't end up out of pocket and if I believe its going to be a terrible month for cycling (for example during Tokyo's notorious rainy season) I may deem it more economical to purchase a commuter pass and forgo the bicycle until the weather clears up.

While there are expenses related to cycling to work, the expenses encountered by a utilitarian cyclist who rides to work on a modest bicycle while wearing regular clothing are far less than those incurred by recreational cyclists who believe they need special kit to cycle to work. You don't, if you have a bicycle you already have everything you need, all the rest is just marketing hype. If your employer continues to pay you a commuter fee even if you chose to cycle then you'd be crazy not to do the math, because you will be better off financially (not to mention that you'll be healthier, stronger, fitter, and happier too!)

On the other hand, if you're an employer and you continue to pay bicycle commuters a commuting fee based on their train journey then we need to talk about implementing a bike to work policy within your company, as having one will substantial savings, and result in happier, healthier and more productive employees. Trust me, its true.