Modifying our perspective about our relationship to the Bees

The bee: a small insect with a flair for architecture, a sweet harvest and a colossal influence on our lives. It turns out we’ve been taking them a bit for granted. Up until recently, few of us understood the role they play in the running of our planet’s biosphere. That is about to change, if it hasn’t already. News of Colony Collapse Disorder (C.C.D.), the seemingly mysterious affliction, linked to pesticides that has struck the colonies of commercial beekeepers everywhere, robbing entire hives of their navigational abilities and killing billions of bees, has hit the mainstream.

Edward O. Wilson, the renowned Harvard biologist and two-time Pulitzer Prize winner, has referred to bees and other pollinators as the “heart of the biosphere.” What would happen without them? Not much, it turns out: crops not pollinated, reduced harvests, less forage for domestic and wild herbivores, no honey, fewer flowers, a ripple effect on the biosphere and the economy. The pollinators are a keystone species, meaning if they crash there will be an ecological domino effect and because of the pollination we need for our agriculture to produce food, we are intimately intertwined in this ecology. 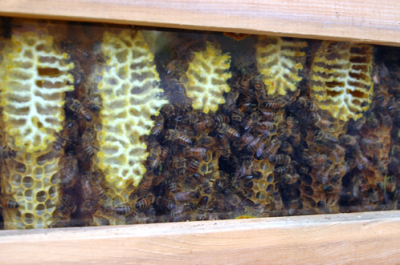 Many who hear about the bee’s plight are frustrated: “What can I do to help the bees?!” Protest (to whom, and about what)? Don’t buy bee products? Buy more bee products? Pray? Give up all hope? Happily, there is something you and I can do, something that can have an effect far beyond the short-term “saving” of the viable bee population. 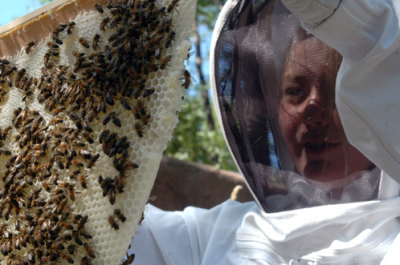 Human beings have had a close relationship with bees for millennia. Paintings and engravings of people tending hives, whether in trees, hollow logs or conical straw baskets, adorn artifacts from ancient times through the 19th century. Until recently, the keeping of bees was a small-scale enterprise, practiced by individuals.   It was an integral part of the sovereignty of local food sources, providing pollination for crops, honey, propolis and pollen for consumption and medicinal purposes and wax for candles, sealing jars and countless other uses. 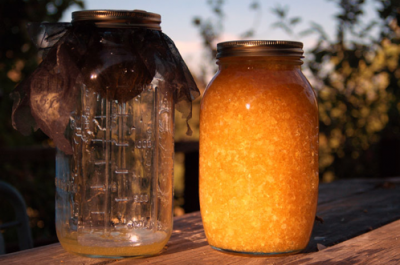 Food sovereignty: a new name for a movement begun in the 1990s: the fundamental right of peoples and economies to control the means and production of their own food. What’s that you say? “Isn’t that what we already do?” A moment’s thought will disabuse you of that happy fantasy. The market, corporations, governments, banks, control our food. It’s almost completely out of our hands and that includes beekeeping. Those small-scale local bee stewards of centuries past have morphed into giant operations involving the care and transport of millions and millions of bees by relatively few people. All of those bees in one place are susceptible to the concentrated ills of large-scale farming: the unknown effects of genetically modified crops, pesticides, herbicides, the destruction of genetic diversity, stresses from the constant moving of their hives, all of which undoubtedly contribute to the viral nature and spread of bee diseases. But what if, as in times past, thousands of hives dotted the urban, suburban and rural landscape, pollinating small organic farms and city gardens, supporting not only the biosphere but the health of the residents through their vitamin-packed, antibacterial, allergy-fighting, locally-produced amber ambrosia? One vital element, the heart, of the local agricultural economy, would once again be in the hands of the natives. It’s possible. 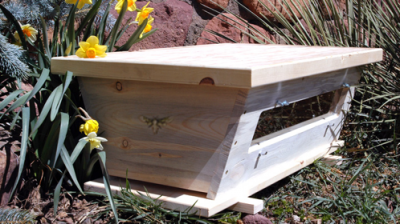 Now, here’s where you come in: you’re a bee guardian. A hive in your backyard, a pot of honey in all your neighbor’s cupboards, your neighborhood’s crops and flowers flourishing, no chemicals or corporations necessary. But keeping bees? Isn’t that, well, for beekeepers? Frames, foundation combs, honey supers, queen excluders, centrifuges, smokers, big white suits? Actually, no. Those things are associated with the old Langstroth hives. Top-bar hives are a revived, traditional way to keep bees naturally. You can do it all yourself, from the building of the hive (or buy one ready-made), to the gathering of the bees (if you wish), to the harvesting of the honey, to the making of candles with few special tools or talents needed. And top-bar hives more closely duplicate bees’ natural homes, less need for smoking and other stresses, so the bees are as happy as you are. It’s a great family project, a natural buzz-inducer in your backyard and good for all of us. Imagine that.