Posted by tvernile on Monday, 14 July 2014 in General Environment 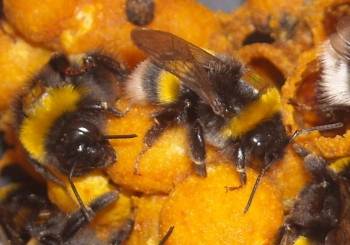 Long term exposure to a neonicotinoid pesticide damages bees' ability to forage for pollen – and may be changing their choices of which flowers to visit – according to new research published today.

Dr Richard Gill (now at Imperial College London) and Professor Nigel Raine (currently at University of Guelph in Ontario) measured the impact of two pesticides, a neonicotinoid (imidacloprid) and a pyrethroid (lambda cyhalothrin), either singly or in combination, on the behaviour of individual bumblebees from 40 colonies over a four-week period.

The bees were free to forage outside the laboratory at will, and all colonies were also provided with artificial nectar (sugar water) in feeders they could choose to visit. For treated colonies, the neonicotinoid was provided in the sugar water and the pyrethroid sprayed onto filter paper which the bees walked over to reach the feeder.

By fitting each bee with a tiny RFID tag, the researchers were able to build up a detailed picture of when individuals went out and returned to their colony throughout the experiment. As well as monitoring the foraging activity of individual RFID-tagged bees, they also recorded how much pollen each bee collected and the colour of the pollen to determine the floral source.

Bees from untreated colonies became better at collecting pollen as they gained foraging experience, while the pollen collection success of bees exposed to the neonicotinoid pesticide declined over time. Neonicotinoid treated colonies sent out more foragers to try and compensate for the lack of pollen being brought back by each individual bee.

Professor Raine said: “Bees have to learn many things about their environment, including how to collect pollen from flowers. Exposure to this neonicotinoid pesticide seems to prevent bees from being able to learn these essential skills. As well as collecting less pollen, we found that the flower preferences of neonicotinoid exposed bees were different to those of foraging bees from untreated colonies.”

Professor Gill said the results suggested that risk assessment guidelines for pesticide use should be reformed.

“Pesticide risk assessments should consider how prolonged exposure to low levels of pesticide might affect foraging performance," he said. "Our data suggest that these tests should be conducted for extended periods to detect the effects of chronic exposure."

The researchers also said bumblebees and solitary bees should be included in risk assessments that currently cover only honeybees.

“If pesticides are affecting the normal behaviour of individual bees, this could have serious knock-on consequences for the growth and survival of colonies," said Professor Raine. "Bumblebees may be much more sensitive to pesticide impacts as their colonies contain a few hundred workers at most, compared to tens of thousands in a honeybee colony.”