Posted by tvernile on Monday, 14 July 2014 in Human Health 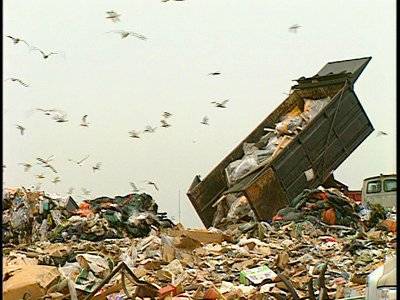 Last winter, when Rick Schreiber saw the photos of two abandoned flatbed trailers heaped with thousands of pounds of low-level radioactive garbage, some spilling onto the ground, he’d had enough. A landfill director in western North Dakota’s Bakken oil field, near where the waste was left, Schreiber turns illegal industrial rubbish like that away from the McKenzie County municipal landfill weekly.

Schreiber and other landfill operators in North Dakota have been catching unscrupulous or uninformed oil producers and their subcontractors trying to unload hazardous radioactive waste into the municipal dump for years. Sick of issuing fines to haulers who claim they don’t know the rules, this past winter he fired off emails to the U.S. Environmental Protection Agency, his county commissioners, the governor’s office and the state attorney general. “Somebody has to take a stand,” says Schreiber. “I’m not here to make friends with the oil companies, I’m here to do my job and protect the people of McKenzie County the best I can and make sure my legacy here in 20 years…isn’t destruction of the environment and a Superfund project.” Schreiber’s comments reflect growing public concern in the state over safe disposal of oilfield waste, and now North Dakota is responding, with a batch of new rules, scientific studies and risk assessments aimed at low-level radioactive oilfield waste.

North Dakota regulators estimate as much as 70 tons of filter socks may be discarded in the state each day.

As Bakken development has boomed over the last half-dozen years, industrial waste volumes have ballooned along with crime, truck traffic, and out-of-state workers. In 2001 North Dakota’s landfills took in nearly 10,000 tons of special waste from oilfields – like chemical-laden rock and soil, and oil-soaked dirt. In 2013 they took in nearly 1.8 million tons, according to the state health department. These numbers don’t include North Dakota’s radioactive oilfield waste, which hasn’t been tracked, though it’s likely expanded at a similar rate. Even industrial waste landfills cannot legally accept most oilfield rubbish containing low levels of radioactivity, which has led to some particularly egregious dumping incidents, including the one near Schreiber’s landfill. An even larger pile was left in an old gas station in the tiny town of Noonan near the Canadian border earlier this year.

Those incidents made national news, and now the state is drafting rules to require oil producers to track low level radioactive waste from the time it’s created to the moment it slides into a special waste landfill. The North Dakota Petroleum Council – an oil and gas industry group – supports the changes, saying that it will level the playing field since many of its member companies already document where they send their radioactive waste.

The bulk of the radioactive waste under scrutiny comes in the form of butterfly-net-shaped mesh tubes called filter socks. Drillers use the socks to strain out solid wastes and prevent wells from clogging with sediment while wastewater is injected deep underground for disposal. By the time the filters are discarded, they’ve usually accumulated radium, a uranium decay byproduct that’s a natural part of oil-rich shale. Last year, 954 socks made it past Schreiber into the McKenzie County landfill, and landfills statewide reported rejecting 89 loads of them.

North Dakota regulators estimate as much as 70 tons of filter socks may be discarded in the state each day. But no one really knows for sure how much low-level radioactive waste oilfields create in the form of filter socks, sludge from tanks, or crud built up in pipes, in the Bakken or elsewhere across the West. Nor does anyone know exactly how such waste might affect workers exposed to it if it’s handled improperly. Oil field waste emits low enough levels of radiation that is not hazardous to be near in the short term, unless it’s inhaled or ingested. But effects from long-term exposure are unknown. So “it does need to be handled properly, there’s no question about it,” says Scott Radig, the North Dakota Department of Health’s waste management director. North Dakota’s Department of Health recently began requiring drillers to keep temporary leak-proof storage containers for filter socks at the drilling site.

North Dakota’s particularly stringent requirements for disposing of any radioactive waste are catching part of the blame for encouraging illegal dumping of oilfield waste. Those rules were created before anyone could foresee that hydraulic fracturing would create a massive boom in western North Dakota that pumped out more than a million barrels of oil per day. The state allows radioactive waste containing 5 picocuries of radium per gram, one of the strictest standards in the country. To put that level into perspective, it’s similar to the amount of radiation that occurs naturally in North Dakota soil.

Companies that do handle their waste legally must ship filter socks and other radioactive waste to special disposal facilities in other states. Much of it goes to Idaho, which has a site allowing up to 1,500 picocuries per gram, and Colorado (which allows up to 400 picocuries per gram), Texas, or Washington. And as of last year, an entrepreneurial farmer in Montana, where 30 picocuries per gram are allowed, opened a special waste landfill, which can now take some of it too.

Now, hoping to curb illegal dumping by making waste disposal more convenient, North Dakota officials are considering raising the level of radiation permitted in waste, a move supported by the North Dakota Petroleum Council. North Dakota doesn’t anticipate its levels will go as high as Idaho or Colorado’s. “That waste is generated here and we believe that it should be disposed of properly here,” says Tessa Sandstrom, the council’s communications manager. The state’s health department is working with Argonne National Lab near Chicago, and the University of North Dakota, to study the risks of low-level naturally occurring radiation, including health risks to people working around it and transporting it, and possible harm to the public and the environment after landfill closure or from spills.

Other oil producing states are also grappling with low level radioactive debris. Pennsylvania is studying radiation in its Marcellus Shale with an eye toward changing its disposal rules for radioactive oilfield byproducts. In March, West Virginia passed a law requiring separate lined containers for hot drilling waste, while expanding how much landfills can accept.

Some see raising North Dakota’s proposal to increase allowed levels of radiation as more of a boon to oil companies that have to deal with high disposal and trucking expenses, than a means to protect public health and safety. Members of a recently formed citizen’s watchdog group, the North Dakota Energy Industry Waste Coalition, say illegal waste dumping is evidence that the state is inadequately enforcing its current rules, not a reason to allow higher levels of radiation in North Dakota.

Schreiber is fine with the state raising the radiation limit – if the waste sites are heavily regulated and inspected often. But he’s also skeptical that enforcement will actually get any better. It took 14 months for the state to follow up with one company he reported for bringing filter socks into his landfill. Plus, even if the radiation level increases, filter socks would still have to go to special waste landfills, not the ones for household waste like Schreiber’s. He stillwonders whether bad actors will avoid paying to use new special landfills in North Dakota if enforcement doesn’t improve. (The health department says that they do immediate follow-up on most cases, but that the spike in illegal dumping means it can take longer to get to each one.)

“We’re not talking about Chernobyl,” he says of the waste. But he still wants to see less of it coming his way. “We don’t know for a guy like me who is around this stuff every single day what the long term effects will be on me or my guys. These guys who say there is more radiation in a banana or your countertops – that’s great, but I don’t sit on my counter with a banana in my mouth all day long.”