Posted by Fischerman7229 on Monday, 30 November 2015 in Environmental Heroes 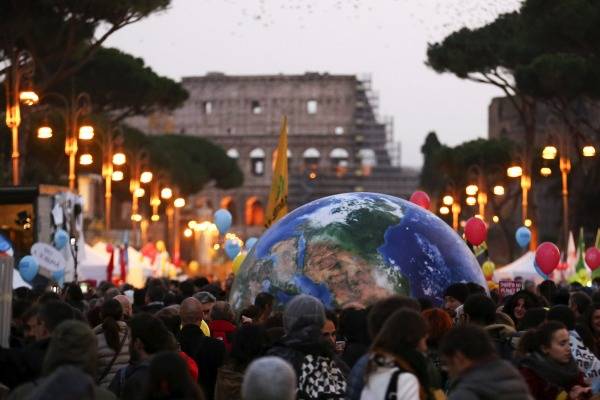 From Melbourne to Mexico City, tens of thousands of people worldwide hit the streets over the weekend to press world leaders to push for a bold international agreement at the upcoming climate summit in Paris.

The center for the demonstrations was supposed to be Paris, where nearly 150 world leaders are gathering for a U.N. global summit on climate change that kicks off on Monday. But after the terrorist attacks there more than two weeks ago that killed at least 130 people, French police banned large protests.

On Sunday, they sought to enforce that ban, firing tear gas in the afternoon on an unauthorized gathering at Place de la Republique, a focal point for protests, and detaining more than 100 people.

The square was also the site of an installation of “marching shoes,” made from donated shoes and meant to symbolize those banned from protesting. The Vatican sent shoes to represent Pope Francis, and U.N. Secretary General Ban Ki-moon donated a pair of his shoes.

Beyond the streets of Paris, more than 2,400 events around the world took place this weekend, with demonstrators hoping to encourage world leaders to deliver a loud message to their negotiators: Do not leave Paris without a strong agreement to slash carbon emissions. The summit concludes Dec. 11.

In Washington, several hundred gathered by the White House and marched along the Mall, with signs that read “preserve our home” and “don’t nuke the climate” and “keep it in the ground,” the latter referring to fossil fuels.

“If you know there’s other protests going on around the world at the same times as yours, it just gives you a lot of energy,” said Ted Conwell, a founder and organizer of Climate First!, a clean energy advocacy group based in Takoma Park, Maryland. “We are the people. We are the boss. We can tell our government we don’t want our climate destroyed any further.”

Vinicius Gonzalez, 21, of Sao Paulo, Brazil, said while the Washington, D.C., demonstration appeared smaller than some others — chilly temperatures and overcast skies may have been a factor — the combined effect of the worldwide protests would be vast.

“As individuals we can’t do much, but if many people show they care about climate change then they have the power to make the leaders act,” he said.

The sheer number of demonstrations around the globe shows that there is widespread public support for action, said Sam Barratt, a spokesman for Avaaz, a global activist community that has helped to coordinate many of the marches.

“It shows it isn’t just a green issue, it’s an everyone issue,” he said.

In Nepal, people marched alongside traffic in the streets of Kathmandu, holding signs that read “Climate Terrorism Ends Here” and “Save our Himalayas.” Organizers in New Zealand said they saw the largest climate marches to date, with about 15,000 hitting the streets in Auckland for a rally that ended with people slapping their thighs and sticking out their tongues for what they called the “People’s Climate Haka.” Undeterred by rainy weather, people in Beirut urged their government to take strong action while marching with a wide array of colorful umbrellas.

Protesters are calling for countries to do more to curb greenhouse-gas emissions and for wealthier nations to help fund vulnerable and poor nations in the transition to cleaner energy.

It was a message broadcast loudly by tens of thousands marching in central London, where many spoke of their disappointment with the British government for dramatically cutting support for solar and onshore wind energy in recent months.

There was a carnival atmosphere on the wet and windy streets of the British capital, with floats and vibrant costumes and the actress Emma Thompson lending star power. The thumping music came compliments of Radiohead’s Thom Yorke, who was DJing.

Sommer Birch-Skerradd, 19, a student wearing a fluffy polar bear costume, said: “We do need to keep up the global voice, to give those final pushes to make a big difference.”

The climate demonstrations in the United Kingdom included many people who had planned to march in Paris this weekend.

The global interest in influencing the Paris talks “shows that there’s been a significant effort to raise awareness,” said Bob Ward, policy director for the London-based Grantham Research Institute on Climate Change and the Environment.

“If it was a massive meteorite hurtling towards Earth, one could imagine an urgent and radical response, nothing but coverage. Because we are dealing with something that people find difficult to grasp, party because of uncertainties and because risks are in the future and the impacts are distributed, I think people are not really as aware of what’s at stake here,” he said.

Some people said they were aware of the stakes and were even willing to venture out on unsafe streets to make their voices heard.

Walid Al-Hashef, 29, organized a march through the ancient city of Sanaa, the capital of Yemen, which has endured eight months of bombing. The march drew about 70 people, he said, and began with the singing of Yemen’s national anthem, followed by reading passages in the Koran that related to climate change. Partway through the march, he said, he had to change routes after an airstrike nearby.

“We want a better future for our children,” he said.

Siddiqui reported from Washington. Griff Witte in Paris contributed to this report.